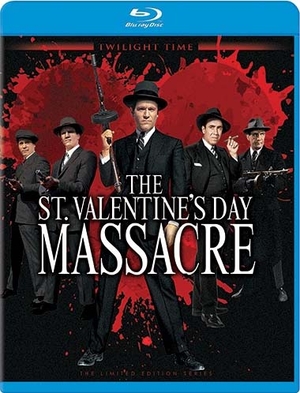 Corman gets a good cast of venerable characters, among them Frank Silvera, Joseph Campanella, Richard Bakalyan, Harold J. Stone, Joe Turkel, John Agar, Reed Hadley, Alex Rocco, and Leo Gordon, and adds in a few of his favorites, including Bruce Dern in a sympathetic role as an earnest mechanic just trying to support his family and unbilled appearances by Dick Miller and Jack Nicholson. Corman is adept at creating human moments between the plot points, reminding us of the little guys caught up in the war and the human cost of the violence, while the narration provides the death dates of each character in their respective introductions. Nobody gets out of this life alive. Some just survive it a little longer.

It’s a superb-looking transfer of the CinemaScope production and shows Corman’s talent for repurposing standing sets and stretching resources to make a low-budget look far more expensive. The colors are bright and vibrant and the image is so sharp and detailed that you can just make out the tips of California palm trees behind the Chicago backlot set in one scene. The new interview featurette “Roger Corman Remembers” is brief, barely three minutes, but Corman is always a good interview and he packs in a lot of information (all of it also found in earlier interviews and Corman bios), and the archival Fox Movietone News section includes clips from three newsreel reports on Capone, including a raid on one of his distilleries.