“For more than 30 years, people bought movie tickets to watch Hackman take charge. He was a molder of men: Hackman taught Redford how to ski, DiCaprio how to shoot, and Keanu how to play quarterback. As the culture’s perspective on Great White Males changed, so did cinema’s view of Hackman. If you want to chart how attitudes about power shifted in the late 20th century, Gene Hackman movies are a good place to start. His filmography unfolds as a treatise on how authority is established, then corrupted, then dissolved.” Steven Hyden does a fine job singing the praises of Gene Hackman, and that incomparable mix of gruff professionalism, emotional directness, and curmudgeonly twinkle that’s kept him most people’s default choice for our best actor more than a decade into his retirement. Via Rachel Handler.

“Given the comparable quality and quantity of Mann’s Westerns, and despite these outlying generic visits that bookend his career, to know Anthony Mann the filmmaker is to know the Anthony Mann Western. For without having found the genre within which he could most evidently express his stylistic and thematic concerns, Mann may not have developed into the unique filmic artist he became, and the Western as an ever evolving form would not have entered one of its key transitional phases as it did.” Jeremy Carr examines how Anthony Mann’s sophisticated embrace of Western tropes—landscapes, rifles, revenge, Stewart (by the time he was done with him at any rate)—led to exemplars of their genre that are also works of unmistakable individual authorship.

If one genre has defeated Martin Scorsese time and time again it’s documentary, his efforts in which tend to portraits marked by bland, unruffled admiration, if not outright hagiography. So what kind of control freaks must the Clinton camp be to scuttle his documentary project on Bill?

Adrian Martin writes well on two ’70s masterpieces (considered separately, alas; yoking them might have led to interesting places), Valerie and Her Week of Wonders and The Bitter Tears of Petra von Kant.

With 16×9 screens becoming the television standard and decades of audiences adjusting to letterboxing, the bad old habits of pan-and-scan are… about as prominent as ever, when it comes to ’scope formatting, as David Bordwell documents.

Chuck Stephens walks us through the actors comprising The Palm Beach Story’s Ale and Quail Club, along with some ancillary employees of the railroad line. 18 of Sturges’s regulars—including former Keystone Kops, an ex-cellist (you’d never guess), and a guy who’d boxed Teddy Roosevelt and Jack Johnson (this one you probably could)—who amassed a career of over 450 film and television roles. No, sorry, that’s Victor Potel’s tally just on his own.

After some months, Ben Radatz’s survey of B-movie credit sequences by the decade returns with well-chosen selections from the ’70s—when increasingly dour design showed the low-budget studio industry “[rejecting] fantasy roots and fully [committing] itself to exposing the raw nerves of America’s institutions”—and the functional, efficient titles of the ’80s. With a ringer or two thrown into the mix. 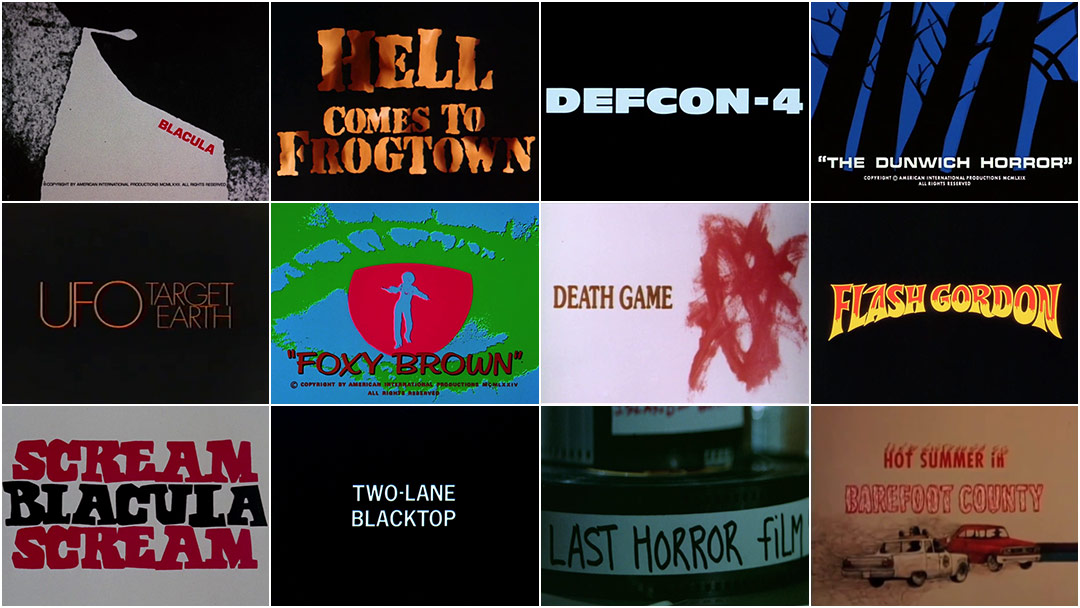 “What [costume designer Rustam Chamdamov] told me back then is a kind of aphorism for me, even though other people don’t see anything special in it. He said: “When you put a necklace on an actress, let the string between the pearls be seen. Let there be gaps between the pearls, so that the construction of things becomes visible. So that it becomes visible that the pearls are lined up on a string.” For me this was a revelation: In everything there is another hidden layer. We see the round pearls and then we see the string and we understand that this string goes through all the pearls. We understand the construction. And you start to think. Everything is constructed, not only the costumes, but everything. Everything has many layers. Behind truth, there’s another truth, and then there is one more and one more. Layer by layer.” Isa Willinger has placed on her website excerpts from her new book on Kira Muratova, including the introduction and a look at Muratova’s uses of avant-garde film techniques and circus imagery. But the highlight is a long, fascinating interview where the director offers thoughts on the miracle of film editing, accepting onset coincidences, and the contrast between art and the chaos of life. Via David Hudson.

“We shot in Poland and then in Paris, and I was like, ‘This is amazing! Where’s the crew?’ And he was like, ‘don’t be an idiot, there is no crew!’…. It’s just he and I in a hotel room shooting it all. Like, that’s it! That’s just the most fun you can ever have, with one of your best friends. I’ll never get to do that again, and I don’t know that any filmmaker will. For three years, the two of us got to take a Sony camcorder and run around Paris and Poland and LA and made a movie. It’s crazy. It’s beautiful.” Laura Dern talks with Owen Myers about the differences between working with David Lynch and Paul Thomas Anderson, how Jurassic Park was the most independent film she made, and why her parents letting the 12-year-old actress shoot a film on the road with the Sex Pistols was the “best decision ever.” Via It’s Nice That.

“I think the main source of my inspiration is human beings: my neighbor, my neighbor’s neighbor, the person I buy milk from—all of those people. These people who we call “anonymous,” people who we never really see doing anything. If I’m out and I see a statue of someone, and I look up at the statue, I never bother to look on the bottom to see who he was. I could be on the metro one day and cross paths with a woman who gave birth to 10 children, and nobody knows her. That’s an achievement too.” Abderrahmane Sissako, interviewed by Violet Lucca, discusses the people often overlooked by other cinemas that his aims to celebrate—starting with Africans.

“The Legacy, for what it was, was all right. Therein lies the legacy. The legacy was my life with Katharine [Ross]. I can’t pooh-pooh the movie. I have in the past, but you get smarter when you get older. I look back fondly on falling in love with Katharine that winter in England. It wasn’t a bad place to be.” You get the sense wherever Sam Elliott is isn’t all that bad a place to be, as he talks Justified, Big Lebowski, and moustaches with Bruce Fretts.

If you’re wondering how long it takes for Lost Themes, John Carpenter’s new album currently streaming at NPR, to give you what you need: 33 seconds into the first track a synth line kicks off its hypnotic, pulsing cycle and at :44 guitar chords slash in accompaniment. Which means I’d placed my order at about 45 seconds and change.

Adrian Curry admits he doesn’t have much information on his latest interest, Vincent Topazio; just seven movie posters, a fair number of which are iconic, all done in an arresting style that marries airbrush slickness to a marvelous ability to capture an actor’s likeness.

Poet, songwriter, singer, and seventies pop-culture punchline Rod McKuen was once described as “the unofficial poet laureate of America.” He was twice nominated for an Academy Award: for best original song in The Prime of Miss Jean Brodie (1969) and best original song score in A Boy Named Charlie Brown (1969). Margalit Fox at The New York Times.

Composer and musician Edgar Froese founded the electronic group Tangerine Dream, helping pioneer a sound and a sensibility that influenced pop music, electronica, and film scores. The group released over a hundred albums and scored dozens of movies, including Sorcerer (1977), which introduced their sound to American audiences, Thief (1981), Risky Business (1983), Legend (1985), Near Dark (1987), and Miracle Mile (1988). The group’s most recent projects include the soundtrack to the videogame “Grand Theft Auto V.” Froese passed away at the age of 70. Daniel Kreps at Rolling Stone.

“In Case of No Emergency: The Films of Ruben Östlund,” the first U.S. retrospective of the films of Swedish filmmaker Ruben Östlund, opens in Seattle on Thursday, February 5 at Northwest Film Forum. The collection presents four features and two shorts, from his debut feature The Guitar Mongoloid (2004) through his acclaimed 2014 breakthrough Force Majeure, running through Sunday, February 8. Details and show times at NWFF. Series passes are also available.

NWFF presents a free 35mm screening of Blade Runner: Final Cut on Monday, February 2, as part of the “Scene on Screen: Film Production in the Northwest” series. The film screens at 5pm and is followed by a panel discussion.

Billy Dee Williams will make an appearance at Scarecrow Video on Saturday, January 31. This is a convention-style event with the actor (in town for an event at Science Fiction Museum) autographing photos for fee. The signing runs from 12 noon to 2 pm at Scarecrow. More details here.