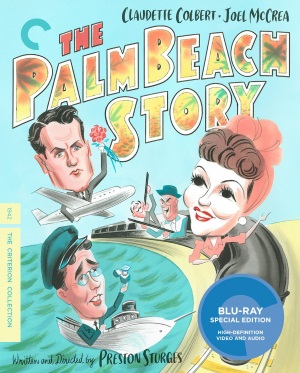 The Hollywood romantic comedy does not get any better than this classic from the height of Sturges’ astounding run of films in the first half of the 1940s. He was one of the wittiest writers of the era, a master of dialogue that defined its characters while bouncing punchlines like a tennis volley, and a lover of slapstick comedy. That mix of high and low, of snappy banter and vaudeville pratfalls, gives his comedies a decidedly American spark. Other Preston Sturges films may be funnier or cleverer or have a sharper satirical edge, but none are as romantic or as sexy. And no other Sturges film has such a magical way of rolling through such wild yet delightful contrivances to push the characters along: the Weenie King, an elderly rich eccentric with a romantic streak and a hearing problem; the Ale and Quail Club, who adopt Gerry as a mascot until their intoxicated antics explode in slapstick chaos. Colbert leverages sex appeal with such matter-of-fact savvy that it hardly feels like scheming; she has her own sense of ethics and plays everything square. Yet even in a screwball world of eccentric millionaires and mistaken identities, it’s the familiar intimacy of an ‘old married couple’ that generates the most heat.

It’s a lovely disc, mastered in 4k from a nitrate fine-grain print and a safety duplicate negative, and digitally cleaned up to look nearly flawless. It features a video interview with writer and film historian James Harvey about director Preston Sturges and a somewhat off-the-cuff appreciation of Sturges’ comedy by actor and comedian Bill Hader (who reads from the screenplay), plus the 1942 World War II propaganda short Safeguarding Military Information written by Sturges and featuring Eddie Bracken (star of two later Sturges classics), the “Screen Guild Theater” radio adaptation of the film with Colbert, Vallee, and Randolph Scott in the McCrea role, and a leaflet with an essay by film critic Stephanie Zacharek.