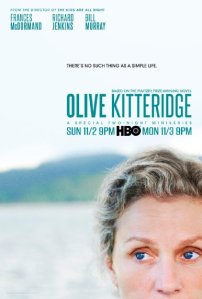 I know, I know: old and slow. My only possible defense is that we have either been guests or had guests since December 23rd, a sojourn involving passports, dear distant family, dear semi-distant friends and a last emotional good-bye at the airport yesterday. The cats barely know what lap to turn to, while I’m summoning up all my reserves to turn up in two matching shoes.

To get to those Globes: they were just Sunday and I know I’m behind on the newspapers, but where’s the outrage? Or even the irony over the results of the Globes TV Movies or Mini-series category? I’m talking about the sublime Olive Kitteridge, anchored by the unsparing eloquence of Frances McDormand, being beaten by the TV show Fargo. Let’s be honest, the initial good will of  Fargo-the-miniseries would never have existed without our collective infatuation with McDormand’s singular character in, ummm, Fargo-the-film. (Just the memory of the actress’s back, squared in rectitude as she marched up to get her Fargo Oscar in 1997 is enough to kick off a smile.)