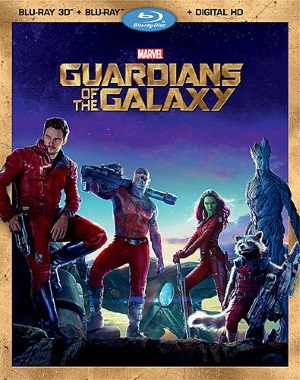 Chris Pratt is shaggily charming as the rogue-for-hire with a souped-up space ship and a soft spot for underdog causes, Zoe Saldana is Gamora, the butt-kicking, green-skinned assassin who wants revenge against her adoptive father, wrestling star Dave Bautista is the muscular and very literal-minded Drax the Destroyer (again, on a mission of vengeance), Bradley Cooper voices the gun-toting, wise-cracking Rocket Raccoon, and Vin Diesel is the heart of the team as Groot, a walking tree of few words.

Here’s a deleted scene from the Blu-ray:

The DVD includes a short promo for the upcoming The Avengers: Age of Ultron. The wealth of extras is saved for the two-disc Blu-ray (which features both standard and 3D versions of the film). Director James Gunn really engages with the film for the commentary track. He’s not new to the format—he did commentary for Slither, Super, even his screenwriting debut film Tromeo & Juliet—but you gotta figure he’s been waiting his career for something like this and he’s clearly engaged to share it all. He’s also in the playful 21-minute “Guide to the Galaxy with James Gunn,” which crams a lot of territory into a very short piece. There’s also a short overview on the visual effects, a brief collection of deleted and extended scenes (with optional commentary by Gunn), and an obligatory gag reel. 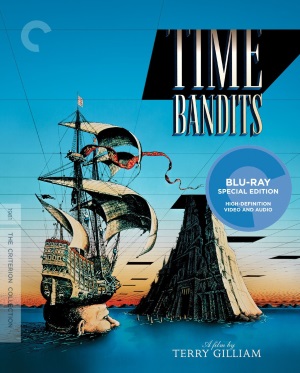 Time Bandits (Criterion, Blu-ray, DVD) is a fractured fairy tale from the cracked imagination of Terry Gilliam, who wrote the warped adventure with fellow Monty Python alum Michael Palin. It’s a strange and weird and wonderful mix of boy’s own adventure, Python-esque humor, and grim irony, all wrapped in tall tales, ancient myths, and historical figures. British schoolboy Kevin (Craig Warnock) is pulled through a series of holes in time and space by a raucous band of renegade dwarfs (among them David Rappaport, Kenny Baker, and Jack Purvis) attempting to plunder their way through history. They’re no criminal masterminds, mind you, and the incredulous Kevin becomes a voice of reason and even something of an anchor when the gang gets tangled up in silly spats and Three Stooges-like shenanigans. And he gets the ride of his life as he meets Napoleon (Ian Holm, who is delighted by “little things hitting each other”), Robin Hood (John Cleese), and Agamemnon (Sean Connery) along the way.

This was Gilliam’s sophomore picture and he makes a significant leap from his debut solo effort Jabberwocky as both a storyteller and a cinematic artist. He lets us see it all through Kevin’s eyes, from a roaring horse that breaks out of his bedroom closet like a dragon from a storybook to the comforting entrance of Sean Connery as the heroic Agamemnon adopting Kevin like he’s an orphaned prince. But the whimsy and idealized heroics are leavened with satirical jabs—Robin Hood’s men are not so merry and their benevolence comes at an unexpected price—and the whole adventure turns out to be monitored by the scheming personification of Evil (David Warner). The colorful set pieces, imaginative design, and physical humor seems aimed at kids, while the dark satire presages Brazil, making it as much an adult film as a children’s fantasy. It’s hard to tell if the grim coda is Gilliam’s idea of a tragedy or a happy ending, but it does tap into a primal urge of adolescent rebellion: a child’s revenge fantasy made real. It’s also hilarious and imaginative and completely unruly, emphasis on that last note. Chaos reigns, evil exists, and the best we can do is keep our eyes open and hold our own.

Criterion released an edition on DVD back in the early days of the format and Image released a disappointing Blu-ray a few years ago. This edition comes from a new 2K digital transfer from the original camera negative supervised by Gilliam and it is a great improvement over all previous American disc releases. It includes the new featurette “Creating the Worlds of Time Bandits” with production designer Milly Burns and costume designer James Acheson discussing the design and creation of the world and illustrated with production sketches and artwork and stills from the finished film.

Carried over from previous Criterion releases is commentary by director Terry Gilliam, co-screenwriter and actor Michael Palin, and actors John Cleese, David Warner, and Craig Warnock, recorded in 1997 and featured on the original laserdisc release. There are also some archival interviews: Terry Gilliam in discussion with film scholar Peter von Bagh as the 1998 Midnight Sun Film Festival and actress Shelley Duvall with Ton Snyder on Tomorrow from 1981. And in place of the booklet is a fold-out insert with an essay by film critic David Sterritt on one side and reproduction of the time-hole map from the film on the other.