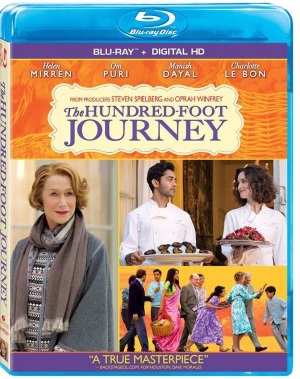 The Hundred-Foot Journey (Touchstone, Blu-ray, DVD, Digital HD, VOD) is a film for our culture: a feel-foodie drama of racial tolerance, cross-cultural acceptance, and fusion cuisine. It’s produced by Steven Spielberg and Oprah Winfrey and directed by Lasse Hallstrom (the classiest of contemporary feel-good filmmakers) and it stars Helen Mirren as the bastion of fine French cuisine and unshakable tradition in the prettiest little village in the South of France you’ll ever see in a movie.

The journey of the title is the distance between Mirren’s French restaurant, a one-star Michelin bastion of the region, and a new Indian restaurant opened by an immigrant family headed by Om Puri and represented in the kitchen by Manish Dayal, who learned the art from his late mother. There is a very underplayed romance between Dayal and Charlotte Le Bon, the young sous chef of Mirren’s establishment, but it is so understated you wonder if it’s actually catching fire at all.

There’s not a beat here that you will surprise you, nary a narrative turn you won’t see coming. While the proprietors go to war, hammering the Mayor with hassles about noise, zoning, and all sorts of nuisance complaints, Le Bon introduces Dayal to French cooking and it turns out that he’s a natural. Competition turns into cooperation and Mirren sponsors his entry into the world of competitive cuisine.

But it’s sweet and affectionate, lovely to look at, and appreciative of the evolution that all the characters make on their own journeys. And if you love food, this film celebrates cuisine as an art, a communal experience, an act of affirmation, and a way of sharing. Pair it with a nice Bordeaux… or perhaps a cup of tea.

Blu-ray and DVD, with a 12-minute making-of featurette. The Blu-ray also features a 12-minute interview with producers Steven Spielberg and Oprah Winfrey discussing their first collaboration since The Color Purple, a behind-the-scenes piece with Oprah Winfrey, and a tutorial video on how to cook Coconut Chicken, plus a bonus Digital HD copy of the film. 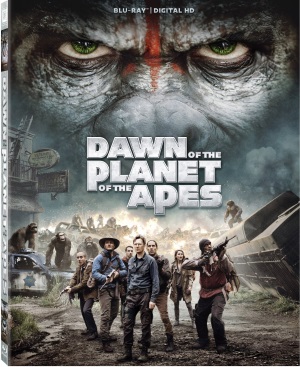 Dawn of the Planet of the Apes (Fox, Blu-ray, Blu-ray 3D, DVD) picks up a decade after Rise of the Planet of the Apes, as the human population is recovering from the devastation of the virus unleashed at the end of that film and the human community has first contact with the ape civilization living in the forest outside of San Francisco. There’s a strong story involving the relationship between two families who reach across the species divide, led by Caesar (Andy Serkis in a brilliant and rich motion capture performance), who is both husband and father to his family and benevolent leader of the simian tribe, and Jason Clarke as an engineer trying to repair an electrical damn to power the human reclamation of San Francisco. They are the exceptions, however. The older apes remember the abuse they suffered at the hands of humans and the humans blame the apes for the virus (never mind that it was created by humans) and have an instinctual suspicion of any animal that can speak. It has a powerful resonance as a metaphor for wars of cultural animosity, hatred and mistrust, with human and ape both equating the worst actions of the other with the entire species.

Matt Reeves, whose Let Me In was an evocative adaptation of the Swedish horror film Let the Right One In, delivers both action spectacle and character drama, and he rightfully centers the entire film on Caesar, the noble leader who understands the best and worst of humanity, and has to come to terms with the worst of his own tribe as both sides push for war rather than co-existence. The film opens on Caesar’s eyes as he leads a hunt and it ends back on those weary but set eyes, contemplating the coming war that is now inevitable.

Fox isn’t making review copies of their discs available to most reviewers anymore—they offer a streaming link to see the film and that’s about it—so I assume the transfer and sound is good but can’t comment on the supplements or on the details of the deluxe Dawn of the Planet of the Apes: Caesar’s Warrior Collection (Fox, Blu-ray).