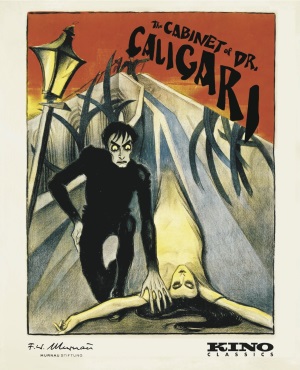 The Cabinet of Dr. Caligari (Kino Lorber, Blu-ray, DVD, streaming) is the grandfather and the godfather of German Expressionist cinema and one of the most influential films of its era. Directed by Robert Weine, it features Werner Kraus as the tyrannical Dr. Caligari, a sideshow barker in cape and top hat who commands the sleeping Cesare (Conrad Veidt), the carnival’s star attraction, to rise at night and do his bidding, a literal sleepwalker who is both monster and victim. With its painterly sets of jutting beams, leaning walls and heavy black lines painted on flats and arranged to suggest both a skewed sense of depth and a forced perspective that flaunts its artificiality, the film dropped audiences into an aggressively unreal world and celebrated its theatrical artifice as a vision of madness and horror. It set the style for a movement, influenced a generation of filmmaker from Fritz Lang and Universal horror movies, and created images so vivid they are still referenced today. This is a movie that has seen some awful home video releases over the years but even the superior presentations (the Image DVD from Film Preservation Associates and the previous Kino DVD from an earlier Murnau Foundation edition) have suffered from damaged footage, missing frames, and inferior source material.

The Friedrich Wilhelm Murnau Foundation (which previously spearheaded the astounding restoration of the definitive Metropolis) undertook the comprehensive digital restoration of this landmark using for the first time ever the original camera negative as the primary source (previous releases were taken from archival prints), with additional footage from the best of the existing archival prints. It was a two year project and the efforts are visible in every frame of this reclamation; the difference between Kino’s previous DVD and this stunning new restoration is night and day. The image is not just clean and free from much of the damage seen on earlier editions, missing frames and footage has been restored and the image is now sharp and strong, with deep blacks, vivid contrasts, and unprecedented clarity, stability, and detail.

Silent with German intertitles and English subtitles, with choice of two scores. Features the German documentary “Caligari: How Horror Came to Cinema” (with English subtitles), stills, restoration demonstration, and a booklet with an essay by film historian Kristen Thompson.

This restoration is also available to stream on Netflix and Fandor in HD. 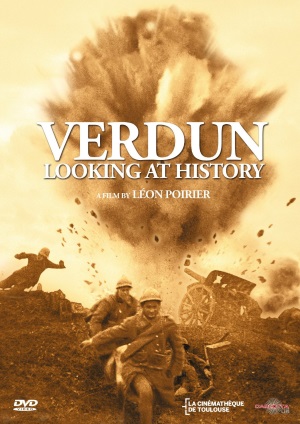 Verdun: Looking at History (Carlotta US / Kino Lorber, DVD, Digital, VOD) comes with an unfortunately passive title in its English translation. It was released in France as Verdun, visions d’histoire, which is more haunting (as if it’s resurrecting the ghosts of soldiers and civilians as visions of the past) and a more fitting title for Léon Poirier’s war 1928 epic. The sweeping portrait of the battle of Verdun, an eleven-month siege where the French held the line against an offensive of overwhelming German forces at the cost of 300,000 solders on both sides, was produced to commemorate the tenth anniversary of the end of the war to end all wars and dedicated it to “all the martyrs of the ugliest passion that is war.” It is part human drama and part history lesson, complete with detailed statistics and animated maps of troop movements to put the big picture around human experience.

Poirier grounds the film in the “everyman” experience by identifying only the real-life historical figures by name. The fictional characters are referred to solely as titles and types—the French soldier, the German officer, the German soldier, the farmer, the wife, the daughter, the young man, and so on—but dramatic they are fully-formed characters whose experiences, soldier and civilian alike, are anything but generic. And while Poirier favors the French experience and can’t avoid the patriotic celebration of the French achievement, he doesn’t vilify the German officers or judge the German soldiers, who like The French Soldier (our central point-of-view figure, played with hearty embrace of life by the great Albert Préjean) are simply doing their duty in a terrible ordeal.

Celebrated upon release for its amazing recreations of battle scenes (which Poirier intercut with real battle footage from newsreels), it was eclipsed by the coming of sound (Poirier reworked it as a sound feature a few years later) and all but disappeared in subsequent years. It was restored in 2006 by the Cinematheque de Toulouse but was only screened a few times stateside since. Kino’s release of the Carlotta U.S. DVD finally makes it available to American audiences.

Features option of French or English menus and French intertitles with English subtitles, with a fine piano score by Hakim Bentchouala Golobitch. The featurettes “Restoring Verdun” and “Visions of Verdun” are French productions that explore the restoration of the original silent of the film and a look at the history and legacy of the film. “The French take their revenge in Verdun” is an archival documentary that shows the more familiar kind of nationalistic approach to war movies and offers a contrast to Poirier’s vision.