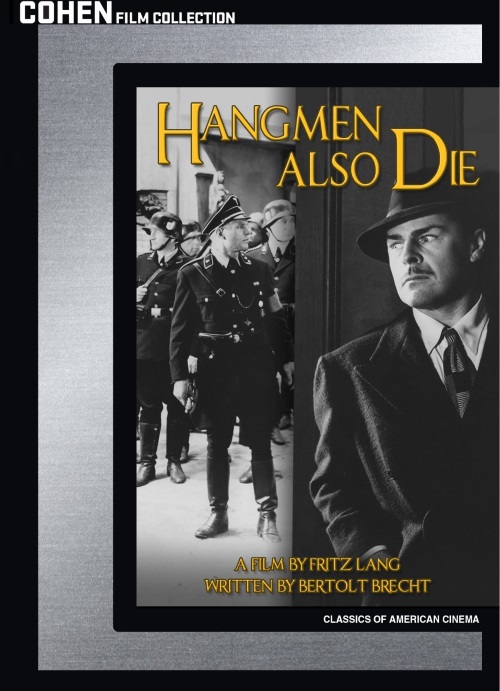 Hangmen Also Die (Cohen, Blu-ray, DVD) is Fritz Lang’s fictionalized take on a real-life historical event: the only successful assassination of a major Nazi commander by the underground resistance in occupied Europe. Reinhard Heydrich, who earned the nickname “The Hangman” for his brutality as Reichsprotektor of Czechoslovakia, was attacked in 1942 and died of his injuries, an action that was met with terrible reprisals against the population.

For the film version, Brian Donlevy (one of the stiffest of Hollywood stars) is the assassin, a doctor working in the resistance who is forced to hide out with a Czech family when his getaway driver (Lionel Stander) is arrested and he is forced to find his own escape. The actual assassination takes place offscreen in the opening moments, which keeps the focus on the plight of the citizens under the boot of Nazi tyranny, and the message of the film follows in every scene: never inform, no matter how many die in reprisals. It’s a hard lesson for Nasha (Anna Lee), who misdirects the Gestapo soldiers during his escape and hides him when the area is cordoned off at curfew, then chooses to turn him in when her father (Walter Brennan), a scholar who clearly knows more about the resistance than he voices, is arrested as a hostage. Her very intention to go to Gestapo headquarters brings the boot down on her family and she watches one innocent after another sacrifice their own lives to protect the assassin’s identity. The lesson is clear: the only victory is in denying the Nazis any form of victory.

Lang fled Germany after equating a criminal mastermind and his organization of thugs with Hitler and the Nazis in The Testament of Dr. Mabuse (1933). When America went to war and Hollywood was given the word to twist its message to war propaganda, Lang sunk his teeth into the assignment with a conviction matched only by fellow European exiles. Hangmen Also Die was the second of Lang’s wartime trilogy of anti-Fascist—making a nice companion piece to Lang’s earlier Man Hunt (1941), released a couple of months ago in a beautiful Blu-ray edition by Twilight Time, and later Ministry of Fear (1944), which Criterion put out on a terrific Blu-ray edition last year and the most overtly political—and the most politically driven. Lang wrote the original script with Bertold Brecht (though John Wexley, who translated the script and rewrote the English version with Lang’s input, took screenwriting credit on the film) and pretty much took over shaping the film to his own desires once shooting began, which infuriated Brecht and led to his break with Lang.

Hangmen Also Die is, frankly, the least dramatically compelling of the three. It’s a sprawling story that leans heavily into the propaganda. The stolid Donlevy is a flat and uninspiring hero who barely changes expression and Anna Lee seems always on the verge of unraveling in panic. Where it’s most effective is when it plays the up to the heroism of everyday citizens, driven less by altruism than hatred for the enemy, and in the telling little touches strewn through the film, like the carefully sharpened pencils lined up like soldiers on the desk of a Gestapo officer, or the crates of beer from the collaborator’s brewery stacked up at Gestapo HQ. The mixture of patriotic drama, detective story and espionage thriller knits together in the second half and pays off in a climactic bit of poetic justice that is a fantasy, a kind of con caper played on the Gestapo, yet is oddly satisfying despite the terrific cost in innocent lives.

Though it’s been on disc before, this edition is mastered from a 2013 restoration, which uses numerous sources (including the original negative) to create a mostly beautiful and fully complete version of the film. There are a couple of rough patches from sequences taken from lesser source material but for the most part it is clean and clear, with sharp images and fine black and white contrasts.

Film historian Richard Pena provides the informed commentary and there is a 30-minute featurette with historian Robert Gerwath on the real life history of Reinhardt Heydrich and the differences between reality and the film’s portrait of events. The accompanying booklet features an essay by Peter Ellenbruch on the production of the film and the falling out between Lang and Brecht.