“In heaven, everything is fine,” but in Eraserhead (Criterion, Blu-ray, DVD) nothing is fine. It’s grim, disturbed, mutated, claustrophobic, a world that appears to be unraveling—or, more accurately, decaying—before our eyes. 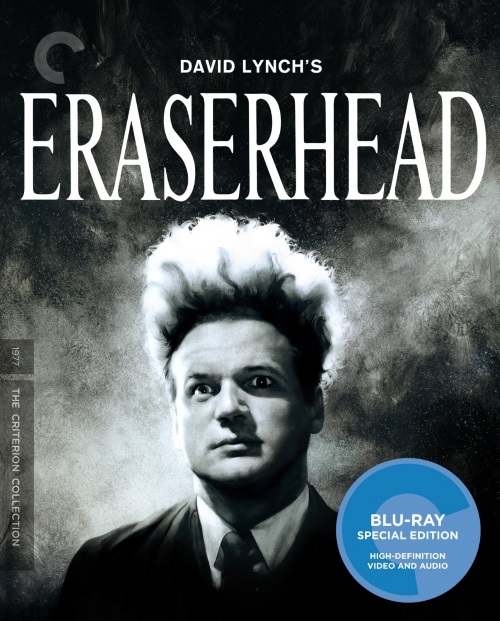 Jack Nance stars as the doughy, dim factory worker who is suddenly thrust into marriage and parenthood and escapes his grimy, droning life by watching the icky mutant cabaret that plays under his radiator. That’s as clear a description of the plot you’re bound to get. This is an existence where dinner squirms to get away as it’s being carved up and the newborn offspring of a dumbstruck couple is a freaky chicken baby that mewls and cries until it drives the maternal impulses right out of its horrified mother.

Lynch shot the film over the course of a year with a loyal cast and crew that, at times, lived with Lynch on the very set of the film. There was nothing like it when it emerged in 1977 and became the quintessential midnight movie experience. Seen today, it is pure, primordial Lynch: a nightmare world of industrial slums and alienated folk, set to a soundtrack of grinding noise that gets under your skin and your skull.

Always the maverick, Lynch personally supervised the remastering of his earliest films on DVD and released them on his own private label, so no surprise that he was intimately involved preparing the film for its Blu-ray debut on Criterion. Lynch supervised and signed off on the 4K digital transfer from the original negative and it looks beautiful. As does the film. Lynch creates beauty out of what others would find ugly and this master preserves the quality of film grain and sculpted light of Frederick Elmes’ cinematography. The stereo soundtrack was created by Lynch and sound editor Alan Splet in 1994 and it is as evocative as the imagery. The film is immersive and short of a theatrical screening of a new 35mm print, this is as rich a presentation as you will likely ever find.