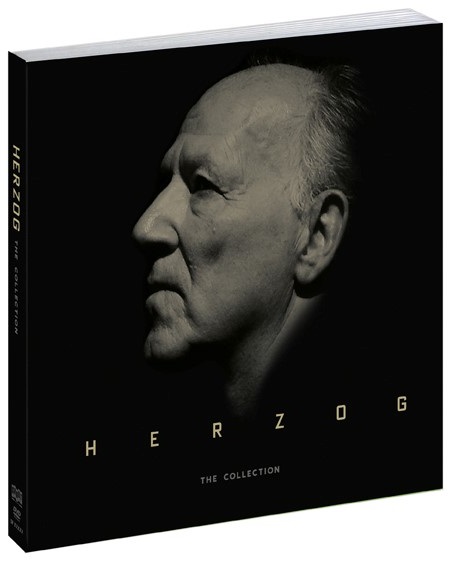 Herzog: The Collection (Shout Factory, Blu-ray) is the biggest Blu-ray box set to get released this year. The collection presents 16 films on 13 discs spanning three decades, from his second feature Even Dwarfs Started Small (1970) to his documentary tribute / remembrance My Best Fiend (1999), which profiles his long, turbulent personal and professional relationship with Klaus Kinski. Apart from Nosferatu the Vampyre, the films all make their respective Blu-ray debuts in the U.S., mastered from new digital transfers produced by Herzog and supervised by Herzog’s longtime producer Lucki Stipetic. Some of the discs look better than others and

It’s not even close to Herzog’s complete output and it leaves out many of Herzog’s most interesting and offbeat non-fiction films (perhaps a second volume will follow if sales are good enough?) but it includes the major films Herzog created in the period, including both the German and English language versions of Nosferatu, which Herzog shot concurrently.

The films in the set were produced and financed by Herzog and he remains ownership of them all. Let’s take a tour through them. Not necessarily in chronological order.

Even Dwarfs Started Small (1970) is the earliest film on the disc and Herzog’s second feature, and Fata Morgana (1971), is his third fiction feature, a dreamy non-narrative meditation on the beauty of the Saharan Desert and the garbage brought to it by humanity. Both of these films, by the way, have commentary by Herzog in conversation with Crispin Glover, which is a highlight all in itself.

Werner Herzog’s breakthrough film Aguirre, the Wrath of God (1972) is an astounding vision of imperialism run amuck in the primitive, savage Eden of 15th century Peru and the film still entranced four decades thanks to the vivid, visceral filmmaking. It’s also Herzog’s first collaboration with madman and meglomaniac star Klaus Kinski, who delivered the most expressive performances that visionary director Werner Herzog ever put to film. Herzog in return gave Kinski his boldest roles. This collection features all five collaborations between the director and the actor, plus Herzog’s documentary tribute to the actor.

In Aguirre, the Wrath of God, Kinski stars as a mad Spanish conquistador searching for the mythical city of gold El Dorado. The imagery is astonishing: jungles layered in mist and fog, broken by a glittering train of armored soldiers with their slaves, their guns, and thrones carrying improbably dressed and coiffed noble women. His vision comes alive in Kinski’s feral, furious evocation of a lunatic soldier overcome with delusions of Godhood. The film’s final scene, with the raving Aguirre reigning over a kingdom of spider monkeys adrift on a raft, is one of the greatest images of man adrift in madness ever put to film.

They reunited in Nosferatu the Vampyre (1979), Herzog’s remake of F.W. Murnau’s silent vampire classic in chilly color: chalky whites and murky midnight colors both faithful to Murnau and quintessentially Herzogian. It’s the same disc that Shout Factory released separately a couple of months ago, and the only to have been previously released on Blu-ray in the U.S. I reviewed it for Parallax View here.

It features both the German language and English language version, which were shot separately but simultaneously with the actor slipping from one tongue to another. The differences are minor but noticeable. Kinski, Adjani and Ganz are rather uncertain and stilted in their English delivery, giving them an off-putting aloofness that makes this version more dreamy and detached. The German readings are warmer and easier, giving the characters a flesh and blood anchor, though French actress Adjani is dubbed by another actress.

Shot a mere five days later, Woyzeck (1979), adapted from Georg Buchner’s play about a soldier pushed to the point of madness, is a stark, bleak vision. Kinski’s feral face is haggard, tortured, twisted in desperation as a tormented garrison soldier who submits to scientific experiments. It’s his most vulnerable and sad performance, but Herzog pulls back from intimacy with a handsome but removed style.

Werner Herzog’s most ambitious undertaking Fitzcarraldo (1982) is this dreamer’s most impressive look into the obsessive drive of another dreamer. Kinski is less demonic and delirious than previous Herzog heroes as the Irish opera lover in South America determined to bring Caruso to the jungle. In this epic of European exploitation and tribal mysticism, Kinski is dwarfed by the majesty of the jungle and enormous scale of the film’s set piece: hauling the steamboat over a heavily overgrown mountain slope with rope, pulley and sweat, an act Herzog performs for the camera for real–and it shows.

In their final collaboration Cobra Verde (1988), Kinski is a 19th century Brazilian bandit sent to Africa to re-open the slave trade, where he raises an all-girl army that makes him a powerful force on the African coast. Kinski died in 1991, but their love/hate bond was too great to end, so Herzog paid strange tribute to the madman with the documentary My Best Fiend (1999). Stories of their volatile clashes and plots to kill one another are legendary and Herzog admits that they brought out the both the artist and the beast in each other. Herzog seems reluctant to dig too deep into their combustible relationship, but his portrait of Kinski manages to capture his extremes, from Kinski spitting and cursing at a booing audience on his so-called “Jesus” tour to a smiling child-man with the butterfly kissing his face.

Herzog’s other great screen actor collaboration was with the inimitable Bruno S., who spent most of his youth growing up in mental institutions and prisons. He lent his blank, childlike face and frozen demeanor to only two of Herzog’s films but they are among his greatest. In The Enigma of Kaspar Hauser (1975) he plays the real life savant raised in isolation who wanders into Nuremberg without any knowledge of language or even other people. Herzog turns his story into a tale of wild innocence tamed and, in many ways, destroyed by the “civilizing” influences of language, logic, and social learning. It remains his sweetest, warmest film. In Stroszek (1977), Bruno S. is a social misfit in modern day Berlin, a starving street musician just sprung from prison who bands together with streetwalker Eva Mattes and old man Clemens Scheitz and moves to “the world”: Wisconsin. It’s a sad, scathing portrait of the American dream turned into an alienating ordeal as their trailer home paradise disintegrates with poverty and frustration. The final act is devastating and both films are beautifully photographed with an earthy power

Picking out the leftover oddities we have Heart of Glass (1976), famed as the film where Herzog hypnotized the entire cast before turning on the camera. The result gives this mystic tale of a Bavarian village gripped in madness a trance-like quality. And he went to the Australian Outback for Where the Green Ants Dream (1984), specifically a sacred spot where an Aboriginal tribe takes a stand against a mining company transgressing their culture.

And there are four additional documentaries. Land of Silence and Darkness (1971) explores the world of the deaf-blind through the life of a 56 year old woman, Fini Straubinger, who has been deaf and blind since her teens and now works to help others similarly afflicted. Ballad of the Little Soldier (1984) looks at the persecuted Mikito Indian tribe of Nicaragua. Lessons of Darkness (1992) is a portrait of the oil fires set by the retreating Iraqis in the wake of their invasion of Kuwait and a visually stunning film essay on the power of nature in a man-made catastrophe. I wrote about Lessons of Darkness for Keyframe a couple of months ago.

Finally, Little Dieter Needs to Fly (1997) is the story of German helicopter pilot Dieter Dangler, who was captured and imprisoned by the Vietcong during the Vietnam war and returns with Herzoz to Vietnam decades later to tell the story of his escape and even reenact some of his experiences. Shackled and marched through the jungle, the balding, middle-aged Dengler quietly confesses “You can’t imagine what I’m thinking.” He’s right, but it doesn’t make the scene any less disturbing, or his survival (in both body and spirit) any less extraordinary. Herzog later retold the story in dramatic form.

These are not necessarily restored editions. They are, however, high quality masters from primary elements from Herzog’s own archive. According to Shout Factory, they were (but for two films) all scanned from the original negatives or the original 16mm CRIs (Camera Reversal Intermediate). The results are a significant upgrade from the previous DVDs released almost a decade ago.

There are no new supplements created for this edition but Shout Factory got the rights to the commentary tracks Herzog recorded for the earlier Anchor Bay DVD releases of Even Dwarfs Started Small (with guest commentator Crispin Glover), Fata Morgana (again with Glover), Aguirre the Wrath of God, The Enigma of Kaspar Hauser, Heart of Glass, Strozek, Nosferatu the Vampyre, Fitzcarraldo (with producer Lucki Stipetic) and Cobra Verde and German-language commentary tracks (with English subtitles) recorded with Laurens Straub for the German disc releases of Aguirre the Wrath of God, Nosferatu the Vampyre, Fitzcarraldo and Where the Green Ants Dream. Also includes the English-language documentaries Portrait: Werner Herzog (on the Woyzeck disc) and Herzog in Africa (on the shooting of Cobra Verde) and the German-language “In Conversation” interview with Herzog conducted by Straub.

Shout Factory collects it all in a handsome bookleaf folder with a 40-page booklet featuring essays, film notes and photos and sturdy paperboard leaves with the discs in individual pockets. It’s very nice package, easy to access and very protective of the discs, and the dimensions (a 7 ½ square) will fit on most shelves.

The release is limited to 5000 copies.