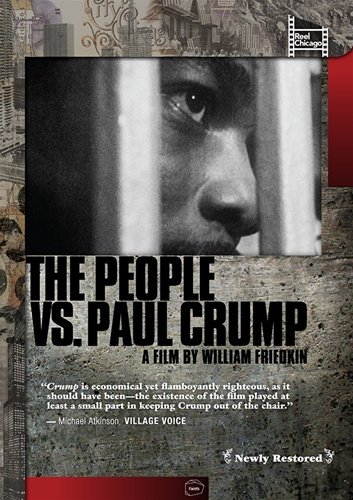 Paul Crump, an African American Chicago man convicted of murdering a security guard during the robbery of a meatpacking plant and sentenced to death in 1953, had faced 14 stays of execution when William Friedkin, a young television producer, took on his story. The People vs. Paul Crump became his directorial debut, a documentary that eschews any pretense of balance and instead makes Crump’s case directly to the viewers. This is documentary as advocacy, championing a cause with passionate and persuasive filmmaking, and the filmmaking is indeed provocative and compelling. The first shot of the film, an evocative shot of Crump leaning against the prison bars of his cell while another inmate blows a harmonica, comes right out of a social drama of injustice, immediately putting our sympathies with Crump.

It starts conventionally enough, with newspaper reporter John Justin Smith narrating in hardboiled newsman mode as he outlines Crump’s case with a mix of historical fact and personal connection. Smith introduces us the man behind the story in an interview that plays out like an old movie, with Smith hammering questions at Crump like a tough but committed investigative reporter grilling an indicted politician, skeptical but moved by the testimony and the compromised evidence against him. Crump comes off calm and measured in his responses and his confessions of other crimes and failings give the ring to truth to his account of events. Then Friedkin jumps from the static new newsreel interview style to a stylized recreation of the crime with actors playing out the robbery on the actual locations. Friedkin shoots it with a mobile handheld camera, a cinema verité style by way of a B-movie crime thriller or hard-hitting exploitation exposé.