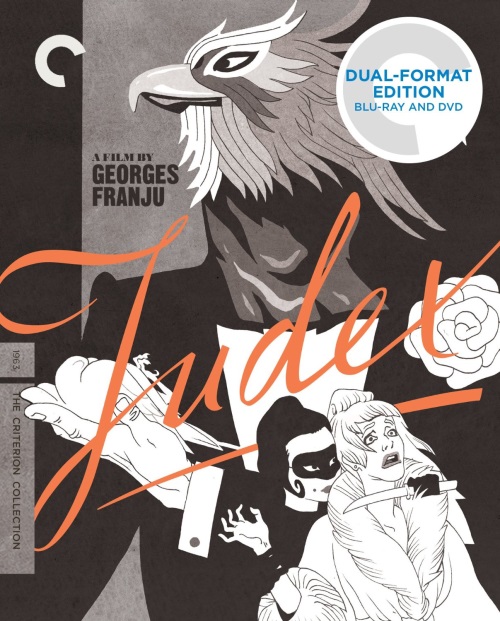 Judex (Criterion, Blu-ray+DVD Combo, DVD) – Georges Franju’s 1963 dreamy remaking / reimagining of Louis Feuillade’s 1916 pulp crime fantasy serial of crime and retribution almost defies the definition of remake. On the one hand it is oddly faithful to the bizarre plot of Feuillade’s original, about a masked vigilante (played with an impassive, blank quality by American magician Channing Pollock) who makes it his personal mission to punish a cruel titan of industry who callously destroys lives in his grasp for power, while compressing the five-hour-plus story to 90 minutes. He keeps the wicked femme fatale (played by Francine Bergé with a delicious wickedness), the innocent maiden (Edith Scob), the goofy detective and his scamp of a boy sidekick, even the 1916 setting, as well as the surreal atmosphere and poetic logic, but the parallels end there. As Franju himself admitted, he wasn’t interested in the spirit of the original Judex as much as the form, and he trades rollercoaster pacing and cliffhanger adventure for a kind of dream ballet of Feuillade’s elegant thriller. Franju’s audience had no access to Feuillade’s films in 1963 – and for the most part still didn’t until a decade or so ago – and Franju compounded the surreal quality by abstracting the conflict even more: there’s no motivation for Judex’s actions, no personality behind the mask, no reason for any of this. It simply is, and it is strange.

This is the kind of film I should love and it’s beyond me why I don’t respond more favorably to Franju’s Judex. I adore the original and I find Franju’s Eyes Without a Face haunting and entrancing. There are moments here as original as anything you’ll find in the French nouvelle vague films of the same era – Judex striding through a costume ball wearing the fierce, feathered mask of an eagle and performing sleight of hand tricks that release pigeons into the ballroom – but it all seems to drift above the story, disconnected to any sense of justice or vengeance or emotion of any kind. It’s a matter of formal beauty and pulp conventions as modern fairy tale, with superhero antics turned into a kind of ritualized dance. Maurice Jarre’s score is delicate and dreamy, suggesting not menace but tragedy and a wistful sense of loss, and the crisp, creamy cinematography of Marcel Fradetal gives it an unreal quality in the rarified reality. Franju really wanted to remake Feuillade’s more sinister Fantomas, with its criminal underworld and large-than-life villains constantly eluding the hero, and I can feel his disappointment in settling for this. His imagery is superb but the stakes are too abstract in invest in.

In French with English subtitles. As usual, Criterion presents a stunning disc, mastered from the original camera negative and nearly pristine after digital clean-up (there are the ghosts of ancient damage in a few shots, a reminder that this is over 50 year old), and includes two rare Franju documentary shorts: Hôtel des Invalides (1951), a tour of the war museum narrated by Michel Simon, and Le grand Méliès (1952), a half-hour portrait of the life and career of the pioneering director. Also features the 1998 TV documentary Franju le visionnaire and interviews with co-writer Jacques Champreux (from 2007) and actor Francine Bergé (from 2012). The accompanying booklet features an essay by Geoffrey O’Brien (which seems rather conflicted in his affection for the film) and excerpts from interviews with Franju.