“I am to be teamed with Billy Wilder, a young Austrian I’ve seen for about a year or two and like very much. I accepted the job joyfully.” Matthew Dessem does a fine job as researcher and writer on the team of Billy Wilder and Charles Brackett, one of Hollywood’s most fruitful examples of opposites attracting—until the inevitable explosion. Part of Dessem’s reportage comes from Brackett’s diaries, which he reports are to be published in the fall, at which time “Hollywood will get its Pepys.”

The new La Furia umana offers a dossier on King Vidor. For the multi-lingual, at any rate; those of us limited to English can enjoy a pair of interesting articles on Vidor and women: Eirik Frisvold Hanssen on his trio of comedies with Marion Davies, and Sudarshan Ramani on how the director’s “explorations of post-war neurosis and sexual hysteria” culminated in the unjustly maligned Beyond the Forest.

“Seeing this, Tokiko puts a gun in her handbag and goes to warn off her rival: a picture-perfect showdown between the modern girl, in her high heels and tight skirt, and the old-fashioned girl in her sandals and kimono. But then, in a strange and suggestive turn, Tokiko is also smitten, and bestows on her enemy not a bullet but a kiss.” Imogen Smith writes of two recently encountered modern girls, silent-movie division: Kinuyo Tanaka in Ozu’s Dragnet Girl, and Magda Holm, titular cross-dresser in Swanström’s The Girl in Tails.

“Chaplin’s physical comedy, on the other hand, was naturalistic; for the most part, his routines operated within an average person’s range of motion. This helps explain why Chaplin would become the most imitated person of his time.” Ignatiy Vishnevetsky describes the eternal relevance of Charlie Chaplin 100 years after his film debut.

Daniel Kremer’s efforts to uncover Sidney J. Furie’s supposedly lost sophomore film A Cool Sound from Hell aren’t quite as strenuous as he makes them sound—more doggedly calling up the BFI than piecing together and tracking down leads. But what the hell, he secured a happy ending for a movie probably nobody else was on the lookout for, so let him have his moment. Via Movie City News.

Juan Orol might be best known north of the border as Mexico’s Ed Wood, but, inspired by a new biopic about the director, El fantastico mundo de Juan Orol, Wheeler Winston Dixon insists he deserves more attention than that. For the demotic punch of his films, and for the drive that allowed him to succeed even as the Mexican film industry was being strangled out of existence by theater-chain mogul William O. Jenkins. Via David Hudson.

Disrespecting The Man Who Shot Liberty Valance, Matt Zoller Seitz breaks down what really happened when he was a student at Southern Methodist University and burned the Steenbeck on which Tobe Hooper had cut The Texas Chainsaw Massacre, a tale that has grown in the telling over the years.

The lazy conflation of costume design with extravagant period or sci-fi creations isn’t only hobbling awards races; as Pippa Day reports, outfits from those films are preserved and carefully catalogued, while such masterful modern-day costuming as Joseph Gordon-Levitt’s fleece jacket from Brick have been completely lost.

“It’s all so subjective, you know? I guess I shouldn’t complain. I’ve learned over the years that people get upset when they tell you something is their favorite movie and you go, ‘Really? You liked that piece of shit?’ That’s the sort of thing Sean Penn would say. So I now tell people, ‘Thank you, that’s great,’ and move on.” Without minimizing some of his nastier comments, or allowing them to overshadow how much of the conversation is bracing, who was expecting Gary Oldman to give David Hochman a staid, controversy-free interview (or ever have a nice thing to say about Nancy Pelosi)? Even his Neal Gabler-invoking apology has the arch pissiness of a natural born bomb thrower.

“In a way, it is a bit sad because… it is not only you but I have heard and read so many times that [his debut feature Here’s Your Life] is the most important film that people remember. I think, of course, that it can make a person happy in one way and sad in another way if you go on for fifty years after that!” Jan Troell discusses his career with Jonathan Marlow, with particular emphasis on his first film and his latest, though the decades in between get some attention as well.

“They are so beautiful, Helen. Coffee is such a strange thing. All the things you have to make it—people find what they love and make their own systems. Lots of people are doing really great things in coffee these days, but you have to find what works for you and you can instantly go to heaven.” Even (especially?) when the conversation’s limited to coffee—as it is with Helen Hollyman—David Lynch’s hyper-naïve enthusiasm remains distinctly his own. Via Criterion.

Better than any trailer you could put together to promote Linklater’s Boyhood are the cast portraits Matt Lankes took of star Ellar Coltrane each year as the film crew reconvened. 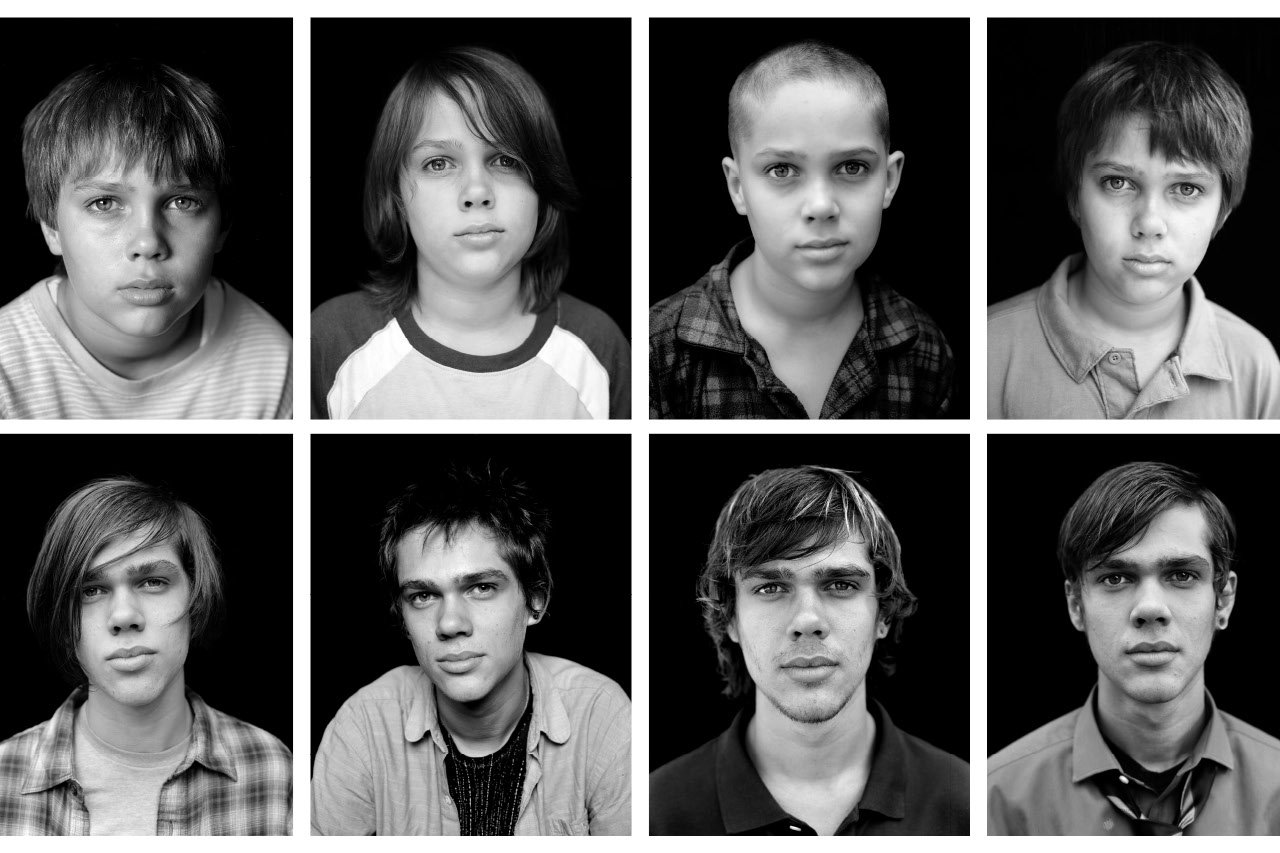 Adrian Curry’s poster galleries are often united by artist or theme; but even offering a sample of items linked only by the coincidence of being up for auction he’s got an unerring eye for striking design and elegant, witty caricature.

Video: Also spotted by Criterion: Guy Maddin, Kim Morgan, and a stuffed wolf salute Bing Crosby and Bela Lugosi. Any three of which should be enticement enough.

Video: “Well, you’re obviously the psychiatrist. I think it’s rather shabby of you to pretend to be the surgeon.” If you prefer your auteurist shorts more creepily sedate, here’s David Cronenberg voicing an offscreen doctor interviewing a woman (Evelyne Brochu) about the unorthodox breast surgery she’s requested, in a short film the director made for a retrospective at Amsterdam’s EYE Institute. NSFW, if you had to ask.

Eli Wallach. Dancer. Calvera. Tuco. Silva Vacarro. Don Altobella. Brooklyn kid. Actors Studio graduate. American treasure. “There are two kinds of people in the world, my friend: Those with a rope around the neck, and the people who have the job of doing the cutting.” Passed away at age 98. Claudia Luther at Los Angeles Times.