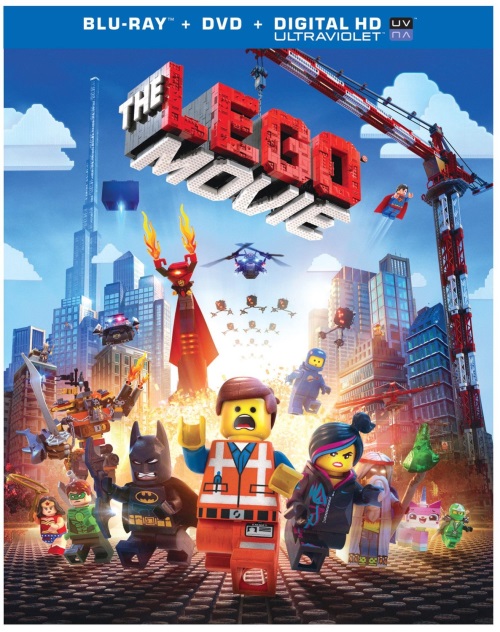 The LEGO Movie (Warner, Blu-ray, Blu-ray 3D, DVD, On Demand) may be the most entertaining feature-length product placement ever created. Written and directed by big screen pop culture surfers Phil Lord and Christopher Miller, the animated feature plays with the possibilities inherent in the toy universe of interlocking blocks where everything is awesome when you follow the rules and never stray from the kit instructions, or so LEGO minifigure and born follower Emmet (voice of Chris Pratt) believes. Then he’s told that he’s “the Chosen One” in the rebellion against Lord Business and his plot to freeze the possibilities into static perfection. The colorful adventure (and it is colorful, in all the bright, primary hues of the toy bricks) is a collision of order and anarchy as a superhero fable that spills over in to the real world in a marvelously clever and resonant turn.

Elizabeth Banks voices the rebel agent Wyldstyle, a master builder and adrenaline junkie who spirits Emmet from his regimented life of lock-step activity, Morgan Freeman spoofs the whole cliché of the wise sage who mixes prophecy with exposition, Will Ferrell has a couple of roles, and Will Arnett, Nick Offerman, Alison Brie, Charlie Day and Liam Neeson are all part of the chorus.

On Blu-ray, Blu-ray 3D and DVD with playful commentary by filmmakers Chris Miller and Phil Lord with actors Chris Pratt, Will Arnett, Charlie Day and Alison Brie, the kid-friendly featurette “Bringing LEGO to Life,” a bunch of shorter featurettes, an “Everything is Awesome” sing-along (parents may want to avoid this one—it’s an earworm waiting to wiggle into your mind), animation tests, deleted scenes and outtakes, and other supplements.

Also available on Digital HD, VOD and Cable on Demand 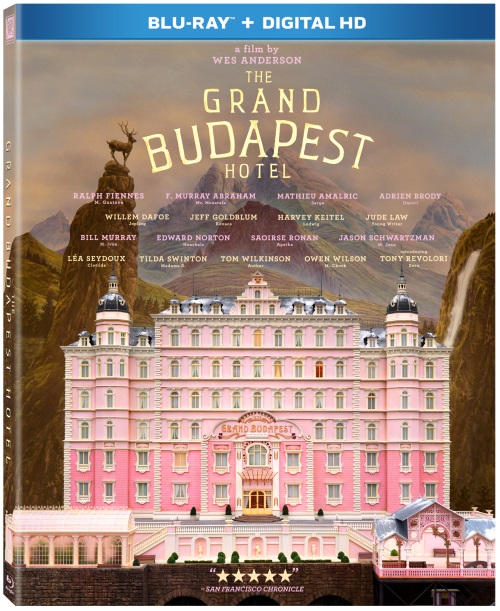 The Grand Budapest Hotel (Fox, Blu-ray, DVD) is one of my favorite movies of the year, an adventure, a murder mystery, an old-world tale, a storybook fable, a murder mystery conspiracy. But under the cake-frosting colors and period gilt is a bittersweet story about a way of life hanging on in a world modernizing and passing it by, something frozen in a bygone idea of entitlement and class, while the drumbeat of World War is beating at the border.

Ralph Fiennes stars as M. Gustave, the elegant, chivalrous, and gigolo-esque concierge of The Grand Budapest Hotel, a luxury hotel in the mountains of a fictional European duchy, and he has a deft way with Anderson’s comedy. He’s light and sprightly, with a combination of naturalness and elevated affectation of manner, yet he always comes off as sincere, especially in his paternal affection for young lobby Zero (Tony Revolori), who he grooms as his successor. There are those who find Anderson’s film in general and this one in particular fussy and twee but I am enchanted by the layering of detail in the imagery and by his affection for the characters, engaged by the mix of idealized old-world charm and empty privilege, and gripped by the ominous undercurrent of this world’s answer to fascism poisoning the culture and disfiguring the beauty of the grand ideal preserved in one man’s memory.

The Blu-ray and DVD features a four-part documentary, a tour of the town conducted by Bill Murray, and other featurettes. The Blu-ray also features a bonus UltraViolet Digital HD copy of the film. Also available on Digital HD.

More new releases on Blu-ray, DVD, Digital, and Cable On Demand at Cinephiled