“There’s three times in a man’s life when he has a right to yell at the moon: when he marries, when his children come, and…and when he finishes a job he had to be crazy to start.” For Geoffrey O’Brien, Red River is an epic that benefits from being made by “a director constitutionally averse to grandiosity and inclined more toward unsentimental comedy than soul-stirring melodrama.”

“That’s all it takes really, pressure, and time. That, and a big goddamn poster.” Since flopping upon its release (not even a rerelease campaign tied to its Oscar nomination helped), The Shawshank Redemption has gone on to be one of the most profitable items in the WB vault, as Russell Adams reports. And the $5,000 check Stephen King received for the rights has a happy ending in its own right. Via Sam Barsanti.

“In the end Bruno is left with nothing: just a used car, a senile old friend, and a stolen gun. What’s a good German to do?” Calum Marsh salutes Herzog’s Stroszek both for its well-acknowledged offbeat casting, and its less remarked upon comic joy.

“The essence of the film is elsewhere. You’re trying to pick up sand with a fork, you’re trying to extract the soul from the body with a pair of tongs and tweezers. You’re lunging to embrace shadows that vanish just when you think you are about to touch them.” The introduction to Mark Rappaport’s new e-book collection The Secret Life of Moving Shadows (posted at Jonathan Rosenbaum’s site at the latter’s request) works as a terrific hymn of praise to technology for changing everything about writing about film.

Digging into the archives of the Hong Kong Asia Financing Forum, a repository of English-language film pitches delivered in conjunction with the city’s film festival, Grady Hendrix highlights some of his favorite unrealized projects, including a disaster tale from Miike, a love story between man and goldfish by Seijun Suzuki, and a musical about conjoined twins Chang and Eng.

The Talkhouse solicits directors for reviews of current films. A mixed bag, like any such group effort, but well worth poking around. Especially for the moments that reveal more about the viewer than the object, like David Lowery using his two viewings of The Immigrant to think about what it means to remember a film, Caveh Zahedi on his long competition with von Trier (of which only Zahedi is aware), and the hidden refrain of my-turn-now? that runs through Sharknado helmer Anthony C. Ferrante’s take on Gareth Edward’s Godzilla.

“When college graduation came around in June 2006 and my then-girlfriend asked when I would get ‘a real job’ and I told her that she must be mistaken because as she knew I had a real job and I went there every day of the week and one of those days went home with a bunch of money, she failed to understand what I was talking about. We broke up that September and I hope she feels great about the choices she made with regards to employment at that time, because I sure do.” Alex Ross Perry recalls with fondness the years he spent working at Kim’s Video, and the film education he received there. Also at This Long Century, Susana de Sousa Dias shares an image of a young soldier that’s haunted her since she stumbled across it in the Portuguese Army film archives; and Lav Diaz presents a brief excerpt from an unproduced script that works as manifesto, mission statement, and possibly confessional.

In 2005, Amy Nicholson argues, the rise of YouTube and online gossip bloggers unbeholden to the dictates of publicists created a perfect storm that would rip apart the carefully managed images celebrities presented to the public. Their first victim (with major assist from his sister, a tyro publicist): Tom Cruise, Mr. Image Control himself, who was never quite as unhinged on the Oprah show as all those viral videos made out.

With help from a biomechanical researcher and a neuroscientist, William Herkewitz explains the kinetics and even more impressive brainwork behind one of Bruce Lee’s most formidable achievements: the punch that could knock you off your pins when thrown from just one inch away. Via io9.

“The word ‘inspired’ at the beginning of this film is a little bit strange. I didn’t put that slogan in front of the movie. What the fuck is this ‘inspired’? I’m not inspired, I’m assaulted.” Catherine Shoard catches up with Abel Ferrara in Cannes, where Welcome to New York screened to official indifference, critical raves, and threats of lawsuits. Placing Ferrara precisely in his comfort zone: the center of attention even as he’s pushed to the margins.

“When there’s a big explosion, it doesn’t really have a visceral impact on the audience if it’s just flinging people through the air. They know that’s just stunts. But if you fly people thorough the air and they then they [sic] hit something, it’s a lot better. And then if they hit something really hard—like, you know, a brick wall—it’s even better. And if they hit a kind of rough edge on that brick wall, then you’re getting to the good stuff. And then if what they hit breaks, then that’s the best.” Action maestro (yeah, I’m one of them) Paul W. S. Anderson describes the method behind constructing a first-rate fight scene or jump scare with Bilge Ebiri.

“Nick would write a version and I would write a version, and then we’d combine the elements that worked. That was the goal. Then about a week later I called him and he said, ‘I’m almost done,’ and I was on chapter three. I was 40 pages in—it was going to be a 2,000-page screenplay [laughs].” Jim Mickle discusses adapting Joe R. Landsdale’s Cold in July—from writing the screenplay with regular collaborator Nick Damici to putting together a dream cast—with R. Emmet Sweeney.

“I think of my own kids. I try to communicate with them, but it’s hard. I joke about it with them. They have their issues as teenagers. I give them their space, but when I have to step in and be firm about something, I am. But my father wasn’t a bad father, or absent. He was absent in some ways. He was very loving. He adored me…as I do my kids.” Notoriously tight-lipped Robert De Niro opens up a bit to Jerry Portwood talking about the documentary he’s made about his late painter father. But only a bit; it’s still interesting to see where even plugging his personal story De Niro shuts things down. Via Movie City News.

Reed Young’s photography series Italian Dubbers playfully recreates iconic scenes from American movies, the titular talents physically standing in for the actors just as they have done so vocally for years. Via David Hudson.

Mark Fertig presents a beautiful gallery of posters from the home of “the most recognizable poster style of any studio in Hollywood, and perhaps the most striking,” Republic Pictures. 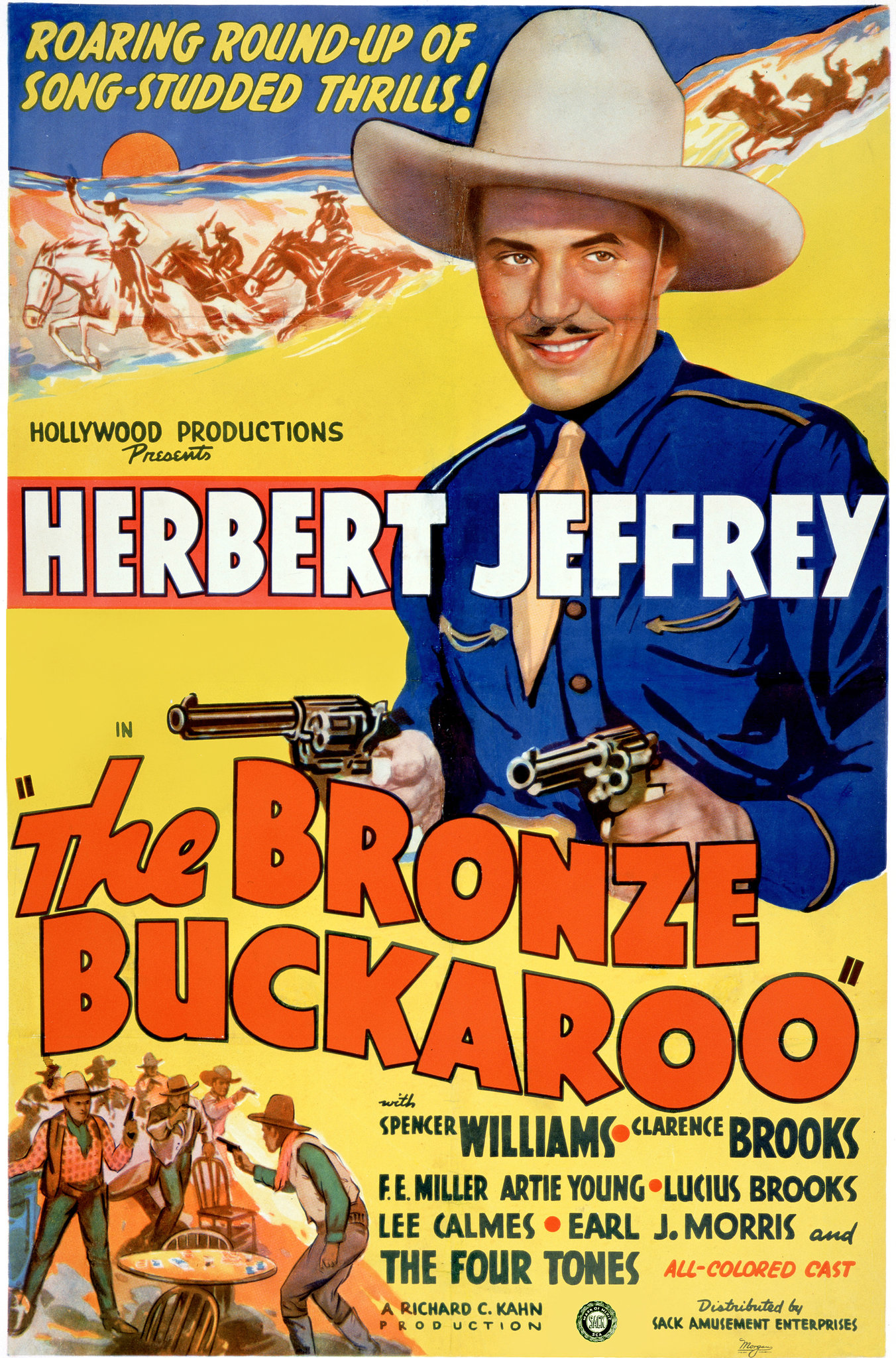 Actor and singer Herb Jeffries starred as a singing cowboy billed as “the Bronze Buckaroo” in a series of “race films” in the 1930s, starting with Harlem on the Prairie (1937), and sang with the Duke Ellington Orchestra in the 1940s, highlights in a career that spanned over 70 years. He began in the 1930s, singing with Earl Hines and his orchestra, and continued through the 2000s. He passed this week at the age of 100 (according to his birth certificate; he may have been older). William Yardley explores his life and career at The New York Times.

German filmmaker Helma Sanders-Brahms, one of the major figures of the New German Cinema, directed 16 features and seven documentaries in her 40 year career, including Germany, Pale Mother (1980), which was just restored and screened in its original version at the Berlinale. She dies at the age of 73 after a long illness. Martin Blaney at Screen Daily.