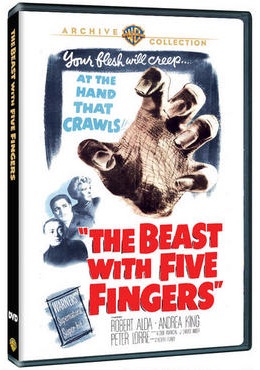 “Your flesh will creep… at the hand that crawls!” promises the poster for the 1948 The Beast with Five Fingers, a Warner Bros. production that, modest by studio standards, is one of the classier horror films of its day. Once a thriving genre, horror films had largely slipped into the B-movie units of the Hollywood majors by the 1940s, with the Poverty Row studios picking up the slack. This production, helmed by Robert Florey and featuring Robert Alda, Peter Lorre, and J. Carrol Naish, sounds on the surface like a twist on The Hands of Orlac, a chestnut of a thriller about the hands of a strangler grafted onto the body of a musician that have a murderous life of their own. And while The Beast with Five Fingers does indeed feature a famed musician and a killer hand crawling through the picture, it is also an old dark house thriller set in a turn-of-the-century Italian castle where friends and relatives gather for the reading of a will and start turning up dead.

That all comes later. The film opens with Robert Alda as an American in Italy fleecing tourists with ersatz jewelry and a line of malarkey sold with a devilish grin. That’s just a sideline for Conrad Ryler, a former musician who is now part of the retinue that serves Francis Ingram (Victor Francen), a piano maestro paralyzed by a stroke but for one arm, with which he uses to pound out Brahms on the grand piano that dominates the front room. Ingram’s nurse Julie (Andrea King) and his secretary Hilary (Peter Lorre), an obsessive who is usually squirrelled away in the library studying ancient astrology and magic, fill out Ingram’s staff, and it’s a rather strained sense of community.