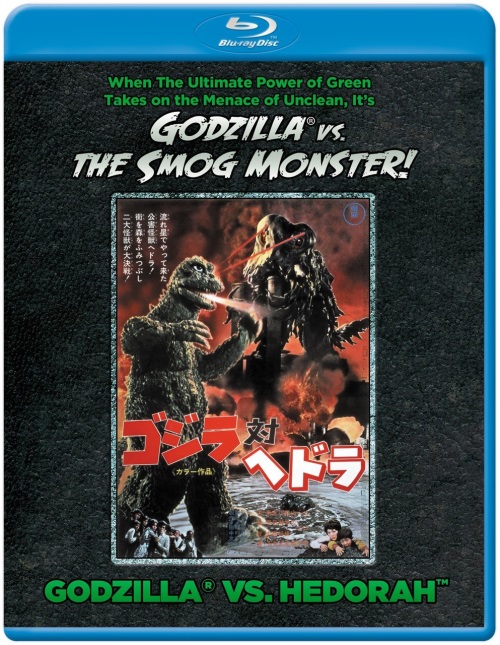 Remakes have a tendency to revive interest in the originals, at least as far as the studios are concerned. They roll out new editions rolling on disc and digital streams in anticipation of interest and the new Godzilla has no shortage of ancestors: 28 Japanese Godzilla features (and one American film that is best not spoken of) from the 1954 original to the final Japanese appearance in the 50th Anniversary feature Godzilla: Final Wars (2004).

Eleven of those films are newly released on Blu-ray this month, spanning forty years of Japanese giant monster madness. Not all of them are masterpieces (or even particularly good, to be honest) but a couple of them are classic and most of them are great fun. And through them all, Godzilla is incarnated by a stuntman in a suit stomping through miniature cities and landscapes while an overcranked camera filmed it at high speed to give a dreamy, slightly-slow motion look and a sense of mass and size to the monster battles. The process is affectionately known as suitmation.

Kraken, an imprint of anime specialist Section23, has three pictures from the first wave of Godzilla film, known to the kaiju cognoscenti as the Showa Period. One of them, the 1971 Godzilla vs. Hedorah (Kraken/Section23, Blu-ray, DVD), originally released in the US as Godzilla vs. The Smog Monster, is the trippiest picture of the entire cycle. It’s a Mod-zilla mixing of pop music, hip nightclub scenes and psychedelic imagery with an environmental message and the pollution spawned monster.

That’s right, Hedorah is born of pollution and toxic waste, growing from a bizarre black tadpole to a weird, blobby slime monster (the name, in fact, is a pun on the word hedoro, the Japanese term for sludge or slime) through osmosis and a voracious appetite for pollution. In the film’s most memorable (and unabashadly druggiest) scene, Hedorah grows legs (or something similar that provides landfall locomotion), ambles up to a smokestack belching black smoke and huffs it down like a stoner with a giant, putrid bong. Sounds like a solution for pollution, right? Except that Hedorah oozes poison gas as a by-product, which itself evolves from a knock-out gas to an acid fog that eats its victims down to the bone. Yes, this is the first Godzilla film since the debut that leaves victims littered across the screen. Even Godzilla is affected by it, and when he punches Hedorah, his arms simply sink into the creature, like it was made of sludge.

The series had been sliding into juvenile silliness for a few years and Banno was brought in to recharge the series. He has some big ideas for this mod monster party and the environmentalist theme is unmistakable, but the seriousness of the message is somewhat upended with the pop-art playfulness of his direction. Animated interludes are interspersed, providing anything from pseudo-educational illustrations for scientific exposition to mere cartoonish doodling, and a dour sequence featuring refugees from the affected cities rendered in black and white jolts to color a teen hipster grabs a guitar and leads a rock band in a high energy dance party in the middle of a rural field. Less endearing is the woozy new Godzilla theme with a wah-wah trombone that suggests the comic stumbling of a wobbly drunk rather than the mighty threat of a prehistoric creature with an atomic upgrade. And for this one film only, Godzilla flies, and it’s not dignified by any measure. He tucks his tail between his legs, turns around, and uses the force of his radioactive breath as a jet propulsion to chase Hedorah flying backwards.

It’s truly bizarre and quite a trip, and it was too much for Toho Studios. A planned sequel was scrapped, Banno was bounced from the franchise and journeyman director Jun Fukuda brought back. Some fans hate the film. I think the sheer oddity of the creative chemistry makes it one of the most strangely entertaining entries of the entire series. 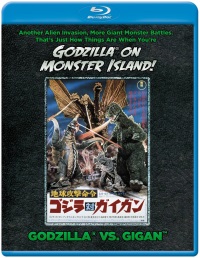 Jun Fukuda directs the two other Godzilla releases from Kraken: Ebirah, Horror of the Deep (Kraken/Section23, Blu-ray, DVD), a goofy entry from 1966 which sets Godzilla and Mothra against Ebirah, giant shrimp monster (it was called Godzilla vs. The Sea Monster stateside), and Godzilla Vs. Gigan (Kraken/Section23, Blu-ray, DVD), the 1972 follow-up to Hedorah where the Big G defends Earth from aliens who control space monsters Gigan and King Ghidorah from a secret headquarters inside the head of the Godzilla-replica building at a theme park, no less (it was renamed Godzilla on Monster Island in the U.S.). 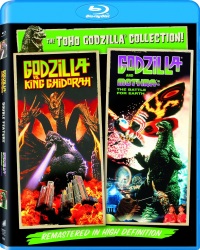 From Sony comes a quartet of double features from the second and third waves of Japanese series. Godzilla vs. King Ghidorah / Godzilla and Mothra: The Battle for Earth (Sony, Blu-ray) are the third and fourth films in the Heisei series, which rebooted the story of the Big G with the 1984 The Return of Godzilla, sweeping away the all the previous sequels as if they never existed and building a new mythology with time travelers and a few choice stars of the previous series.

Thus Godzilla vs. King Ghidorah (1991), a wild mix of time travel, bionic monsters and historical revisionism. A team of do-gooders from the future pay a visit to 1992 Japan, ostensibly to save the island nation from certain doom by ridding them of Godzilla, but in reality putting in motion an insidious plan for… well, you know how these things work. The film explains Godzilla’s origins (he’s a surviving dinosaur mutated by the radiation of H-bomb tests in the South Seas islands), then wipes it away with alien hocus pocus. In his place the Futurians create the dreaded three-headed, gold-scaled flying dragon King Ghidora, whose snaky, bobbing heads scream lightning bolts, and send him on to level Tokyo. Fear not, for no simple time travel paradox can stop the creation of the planet’s greatest lizard king and Godzilla is back, bigger, badder and angrier than ever. Don’t try to make sense of the time travel shenanigans for the plot has more holes than sieve. Just enjoy the no holds barred giant monster battles (including a bout between the Big G and a rebuilt flesh and metal Mecha-King Ghidora) and loopy sci-fi flourishes. He returns in Godzilla and Mothra: The Battle for Earth (1992), which is practically a modern remake of the original Godzilla vs. Mothra, with an evil twin Mothra tossed in for good measure 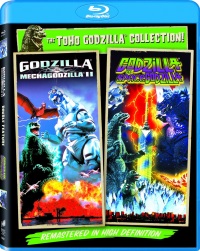 The big monster battles continue in Godzilla vs. Mechagodzilla II / Godzilla vs. SpaceGodzilla (Sony, Blu-ray), which pit the Big G against the giant robozilla built to protect the world and a bizarre clone from space, respectively, and in Godzilla vs. Destroyah / Godzilla vs. Megaguirus (Sony, Blu-ray). The former celebrated his 40th Anniversary by killing him off in a knock-down, drag out match where Godzilla passes the torch to Godzilla Junior with a blast of radioactive energy. It was the final film in the Heisei series and the Japanese franchise took a break while Roland Emmerich made his misguided remake. After it flopped, Toho came back with the Millennium series, of which Godzilla vs. Megaguirus (2000) was the second installment. 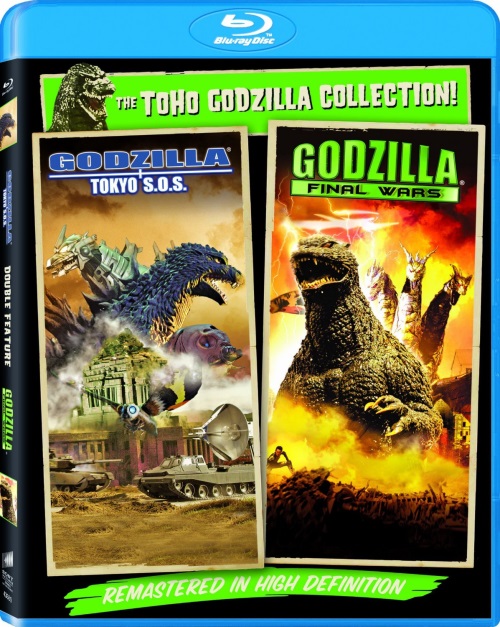 The Japanese series comes to an end with Godzilla: Tokyo S.O.S. / Godzilla: Final Wars (Sony, Blu-ray). Tokyo S.O.S. (2003) brings back both Mechagodzilla and Mothra (along with her singing pixie princesses) and in an inspired bit of nostalgia has Hiroshi Koizumi reprise his role as Dr. Shin’ichi Chujo, his character from the original Mothra. This chapter is set in the culture of mecha mechanics and pilots that inspired Pacific Rim and pits both of its guest stars against Godzilla. Watch the post-credits teaser for the set-up for the 40th Anniversary feature Godzilla: Final Wars (2004), to date the final Japanese Godzilla film.

Godzilla: Final Wars is at once tribute, celebration, summing up, and send off, and quite possibly the first Godzilla film directed by an honest to goodness fan of the old-school movies: genre stylist Ryuhei Kitamura (of the cult hit Versus). It’s the first Godzilla film in decades to embrace that early “history,” bringing back all the old monsters for one last fight, and for good measure it tosses in an alien invasion force and a team of Power Ranger-like mutants to enlist Godzilla in their battle to take back the Earth. It’s lusciously, knowingly, lovingly cheesy, an affectionate farewell with a hilarious parting shot at the American remake. Every creature brought in to battle Godzilla is a classic suitmation monster with one exception, a suspiciously familiar CGI lizard who is easily tromped by the real lizard king in record time.