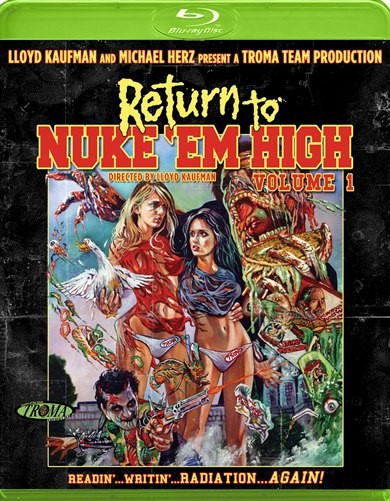 If you’re arriving late to class, here’s the recap: director / producer / modern B-movie legend Lloyd Kaufman directed the original Class of Nuke ‘Em High, a flamboyantly grotesque parody of high school movies and radioactive mutant horror, in 1986. The premise: a high school in Tromaville, the most toxic city in America, is located right next to a nuclear power plant and the students gets contaminated when a dealer sells drugs irradiated from the plant. It spawned two sequels (produced and co-written but not directed by Kaufman), the last one released in 1994. Twenty years later, Kaufman revives the franchise with a new micro-budget epic so sprawling that it was split into two parts (ostensibly upon the recommendation of Quentin Tarantino, a la Kill Bill). Return to Nuke ‘Em High Volume 1 was shown at film festivals and played limited runs and special midnight screenings across the country before landing on Blu-ray, DVD, and digital platforms, which is still the primary mode of distribution for Troma’s cult movies.

In Return to Nuke ‘Em High Volume 1, the old nuclear plant and its giant cooling towers (which loomed over the old high school thanks to cheap optical effects) have been bulldozed under (that’s what passes for environmental clean-up in the Tromaverse) but a new business has sprung up in its place. As guest narrator Stan Lee explains over the opening montage of clips from the earlier trilogy, “Tromorganic Foodstuffs, Inc, was built right over the old Tromaville Nuclear Power Plant. What could go wrong?”