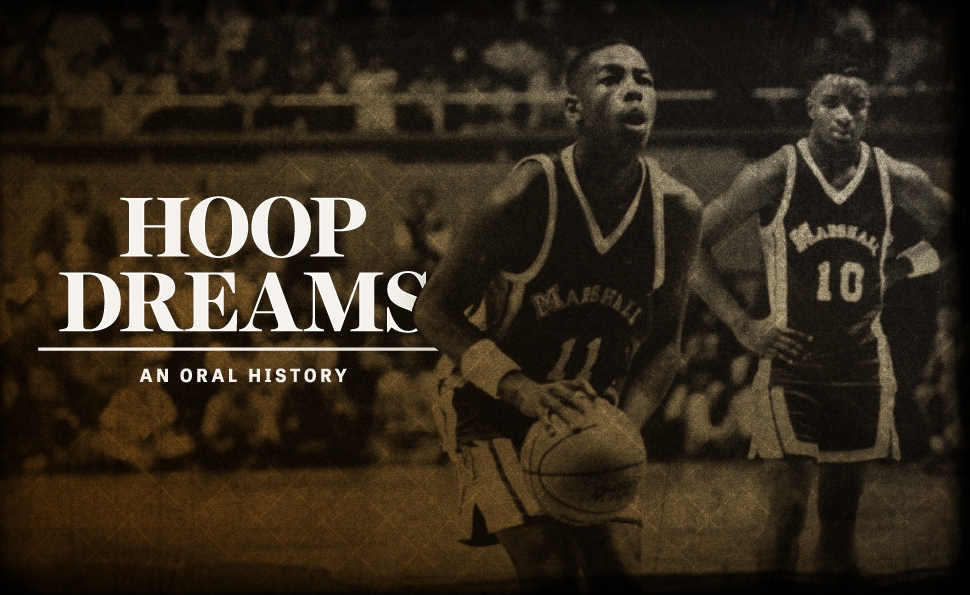 “I remember distinctly having this conversation with a higher-up at Corporation For Public Broadcasting [CPB] when we applied to them. He’s an executive who is African-American. He said, ‘It’s very interesting, but I don’t feel the stakes in this.’ I said, ‘What do you mean?’ And he goes, ‘If one of these guys became a drug addict or was killed, well, then you got something. Now that’s a story.’ And I was like, ‘We’re hoping neither of those things happen to these guys.’” In Jason Guerrasio’s oral history of Hoop Dreams, the filmmakers and some subjects lay out how a project practically stumbled into becaming one of the great success stories in documentary films—at least if you don’t count its treatment by the Oscars and the Hollywood studios.

“What he did have in his first talkies, unfortunately, was a nervous voice. Though it was basically a baritone, it was a jumpy, pinched, sometimes nasal baritone. His voice revealed something about his own insecurity, and this left him open to ridicule.” Dan Callahan gets the big misapprehension about John Gilbert out of the way to consider an actor who never found in talkies the assurance, or the support system that had made such confidence possible, he’d had in the silent days.

“Make-up is pointless! It does nothing anymore! Are you even listening to me? Do you even care? You stand there with your 22-year-old skin and your tits like rocks and laugh at me.” In an interview and brief excerpt from her new book on the actor, Karina Longworth discusses how Meryl Streep’s turn to comedy—which overcame both Hollywood’s age barrier for women and critics sniffing at her supposed stuffiness—came from as feminist a position as her other career choices.

For J. Hoberman Rififi is not merely one of the great noirs, but emblematic of “transnational” films, a “cinema that crossed national boundaries while appealing to both popular audiences and cinephiles,” however unmotivated of his own free will it was that Dassin wound up in France.

Given his day job, no surprise that John Bailey would not only love Vertov’s Man with a Movie Camera, but be especially captivated by the daring escapades of younger brother Mikhail Kaufman in the title role, and the 1927 DeBrie Parvo he wields throughout.

In the wake of Manohla Dargis’s recent suggestion that, with over 900 films flooding New York annually the spigot should be turned down a bit, the Times solicits thoughts on the state of independent film from such figures as James Gray, Christine Vachon, and Film Forum director Karen Cooper.

“You dress like shit, so fuck you!” Christopher Laverty offers some interesting articles on clothing design: for The Standard, Giorgio Armani describes the thoughts behind the elegant look he crafted for five leading men, from American Gigolo to The Wolf of Wall Street. While Laverty’s own site ClothesonFilm hosts Bonnie Radcliffe’s well-observed analysis of how American Psycho uses sartorial perfection as both badge and barrier.

The unifying theme of Michael Koresky’s tour of three movies from 1981 is Hollywood’s treatment of the elderly, who, when finally not ignored, get sentimentalized as curmudgeons with a heart of gold, simplified as sardonic quipsters, or cynically used to bring gravitas to by-the-rote horrors.

The BFI has posted the short but moving telegram Dirk Bogarde sent to Joseph Losey at the conclusion of filming Accident.

Nathan Yau has translated each of the AFI’s top 100 movie quotes into graph form. While some depictions are merely the type of minimalist icons overdone of late, several—like the Venn diagram illustrating Ollie’s immortal lament from Sons of the Desert—are positively inspired. Via io9.

“I don’t know how much truth people are gonna see in a film even if it’s a documentary, ya dig? And if you say it’s not a documentary, then no way. I mean, I don’t go to the movies looking for an answer to who killed Jesse James, you know what I’m saying?” With a film about Dominique Strauss-Kahn just finished and one on the death of Pasolini about to start filming, Abel Ferrara has a lot on his mind about representing the truth in cinema, as revealed in his interview with Calum Marsh. Not that he’s shy expressing his thoughts on other matters, like the relative values of critics or test screenings.

“I saw different types of machines and dials and things that I hadn’t seen before, and I saw many smokestacks with smoke coming out and some with fire coming out, and I got a feeling of industry even though, maybe, I didn’t know what it was. It was so different and it held a power and when I was very little, it held a fear.” David Lynch—I mean, who else could it be?—describing to Liz Jobey his first childhood encounter with the abandoned factories of which he’s become an obsessive chronicler. A small gallery of his photographs accompanies.

“My characters rarely find themselves where they want to be in the world: there is always somewhere to escape from, to return to, or to conquer by means of the imagination.” Mati Diop, interviewed by Andréa Picard, discusses what her acclaimed short films have taken from the influence of collaborators like Claire Denis and the legacy of her uncle, Djibril Diop Mambéty. Via Criterion.

Lodge Kerrigan has posted some behind-the-scenes photographs from Clean, Shaven, including, yes, a look at the prosthetic used for that scene. Also at This Long Century, Manakamana’s Stephanie Spray, who began her filmmaking career in Nepal, notes the ironies of Kentucky Fried Chicken’s encroachment in the Third World. Via David Hudson.

Philip Castle, designer of the posters for A Clockwork Orange and Full Metal Jacket, among others, offers the rare account of working with Stanley Kubrick that comes off as a completely relaxed and genially collaborative experience. Among the previously unseen artwork illustrating the interview are the first sketches for A Clockwork Orange, drawn in the dark as Castle screened the film’s rough cut at Kubrick’s home. Via Christian Annyas.

Russell Johnson will forever be identified as The Professor on Gilligan’s Island but he was as busy a contract studio actor as there was in the years before he landed the role, appearing in scores of TV shows and movies (often uncredited), playing heavies and extras in westerns (he spins the Chuck-a-Luck wheel in Rancho Notorious) and, yes, scientists is a handful of Universal science fiction films. His most memorable turns came in the films of Jack Arnold: It Came From Outer Space (1953), This Island Earth (1955, which got an uncredited assist from Arnold), and as an abusive, alcoholic father in The Space Children (1958). (Arnold also directed Russell in over two dozen episodes of Gilligan’s Island.) He also appeared in two episodes of the original The Twilight Zone and played scientist for Roger Corman in Attack of the Crab Monsters (1957). He spent the last decades of his life in semi-retirement on Bainbridge Island in Washington State and passed away this week from natural causes at the age of 89. More from Bruce Weber at New York Times.

Dave Madden, another sitcom icon from the baby boomer era, played the put-upon manager of the family rock band in The Partridge Family, a role that had him playing comic relief off Danny Bonaduce. Before that role, he was a member of the Laugh-In comedy ensemble and he later landed a semi-regular role on the sitcom Alice. He died in Florida at the age of 82. More from Variety.

Japanese actress Keiko Awaji made a memorable debut at the age of 16 as a brassy showgirl in Akira Kurosawa’s Stray Dog (1949) and co-starred in The Bridges of Toko-Ri (1954) at the beginning of a busy career in Japanese cinema. She passed away at the age of 80, from cancer. More from The Japan Times.

Ruth Duccini, who played a munchkin on the original The Wizard of Oz, was one of the last living members of the cast when she passed away this week at 95. Elaine Woo at Los Angeles Times.