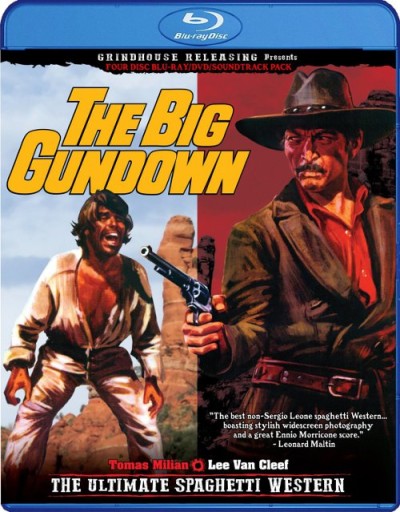 It’s hard to believe that The Big Gundown (Grindhouse, Blu-ray+DVD Combo), easily one of the best spaghetti westerns ever made, has never been on home video in the U.S. in any legitimate form before. It features Lee Van Cleef in a rare heroic role as Jonathan Corbett, a dogged lawman without a badge who applies an unwavering and unforgiving sense of justice, and Tomas Milian as Cuchillo, the Mexican peasant outlaw accused of raping and killing a 12-year-old girl. Cuchillo is more con man and frontier rascal than hardened criminal, but his antics and his survival instincts still manage to get a few unsavory types killed in the proverbial crossfire while Corbett’s obsessive pursuit of justice brings its own collateral damage. But in the savage frontier societies of this spaghetti western culture, that still makes them the good guys.

Director Sergio Sollima is not the stylist that Sergio Leone was and doesn’t have Leone’s operatic approach to conflict on the desert frontier, but with his screenwriting collaborator Sergio Donati he certainly had a way with portraying the corruption of the American dream on the frontier. Van Cleef’s Corbett is a humorless, unstoppable force and Milian’s Cuchillo a wily, earthy Bugs Bunny playing pranks on his escape, but both are pawns in a game of power and money. Which, of course, they learn in due course as the pursuit crosses the border into Mexico and the forces of law and order sent by a would-be railroad baron become ruthless vigilantes. Ennio Morricone provides a suitably spare score and Almeria, Spain, and surrounding areas double for the towns and the beautiful but hostile desert plains.

This debut release is a true labor of love from Grindhouse, a four-disc Blu-ray+DVD+CD Combo that features both the original English-language release version expanded with three additional scenes not seen in American release prints, and the complete Italian director’s cut, which runs 15 longer than the expanded American version (a complete list of cuts is listed in a DVD-ROM supplement on the DVD). The American version is mastered from a 2k digital restoration and the Italian cut uses some of these elements, which makes it relatively easy to spot the footage unique to this version (the drop in video quality is not dramatic but it is noticeable). Both version are presented on separate Blu-ray discs, with the DVD featuring the expanded American cut and a CD soundtrack with Ennio Morricone’s score. 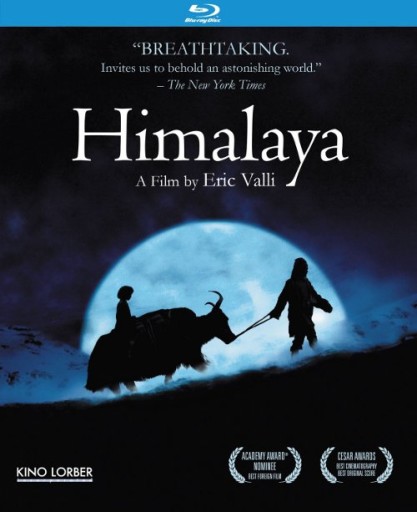 Himalaya (Kino Lorber, Blu-ray, DVD) (Dec 31) – Director Eric Valli, a former National Geographic documentarian, hauled his crew up to the high passes and mountain lakes of the Himalayas to shoot this simple, almost mythic survival adventure, but this no documentary. It could be 2 or 200 years ago that this tribe makes its trade pilgrimage through the mountains to the low land. At stake is the stubborn pride of the old former chief reclaiming his position when his son is killed, and the sense of responsibility of the rebellious young natural leader when he sees blind emotion leading the old man’s determination to make the journey without him.

There’s a certain hit of a European creator turning the adventure of an almost primitive culture into a pseudo-mythic journey and the simplicity of this tale threatens to collapse into cliché at times, but the iconic power and directness of the non-actors and the sheer magnificence of the imagery pulls this caravan over the trickiest terrain. Features commentary by director Eric Valli, a 26-minute “making of” documentary, and the original EPK (electronic press kit) for the film. 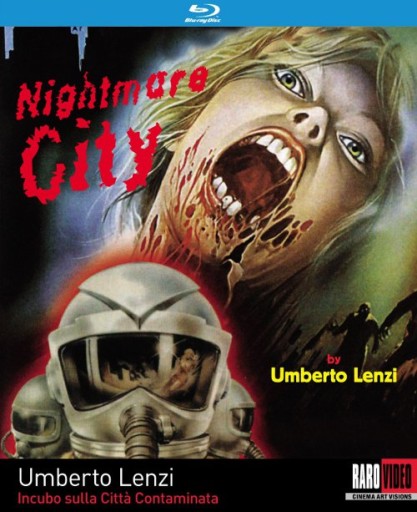 Nightmare City (Raro, Blu-ray, DVD) (Dec 31), also known as City of the Walking Dead, is the notorious goremeister Umberto Lenzi’s 1981 pseudo zombie thriller. These are actually radioactive mutants, the victims of a deadly spill from a local nuclear plant disaster, but they have an unhealthy hunger for human flesh just the same. Hugo Stiglitz (yes, the inspiration for the name of the Tarantino character in Inglourious Basterds) is the journalist sent to cover the accident and Laura Trotter is his medical doctor wife, who do their best the evade the flesh eating ghouls while the army (led by Mel Ferrer) just seems to annoy them.

Previously on DVD in the US, this edition features a new HD master. Italian and English language versions with optional English subtitles, plus an interview with director Umberto Lenzi, trailers, and a booklet.