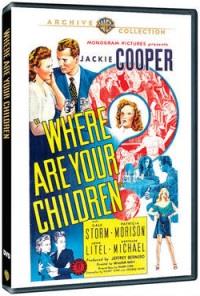 The manufacture on demand line has been a boon to film buffs with rather specialized tastes, bringing out secondary films by big stars, significant films by second-tier actors and actresses, vintage musicals, cult series, and other films that don’t have the credentials to compete in the mainstream DVD and Blu-ray market.

One area that is especially snubbed by studio releases is the B-movie. The term itself is often misused by folks who use it to refer to any low-budget film. The real B-movie was a very particular kind of production. Its heyday was the mid-thirties, when Hollywood first started experimenting with the double feature as the foundation of a night at the movies, to the early 1950s, when TV started competing for audiences the B-movie (in particular the B-western) evolved into TV programs.

Simply put, the B-movie was designed to play as the second feature in support of the star attraction. It generally ran between 55 and 70 minutes and featured up-and-comers, has-beens, or any number of players who simply found a familiar niche in stock genres, and were made cheaply and sold at a flat rate. To make money, they had to keep costs below the going rate. To keep making money, they had to make something audiences liked, or at least didn’t mind sitting through.

A lot of these movies found some level of fame and cult awareness — Charlie Chan mysteries, Roy Rogers and Gene Autry westerns — and in some cases could actually be a star attraction in their own right. Those films tended to find their way to home video. Most of the rest were forgettable and many of them pretty awful, but there are always exceptions and plenty of interesting items. It became its own cinematic ecosystem, with directors, producers, and stars who found a career in these films, but it could be a training ground for young directors and writers and a proving ground for new performers (like John Wayne, who spent almost a decade learning how to be a movie star by cranking out westerns for Republic). And while these films lacked resources and time, they also often get made with little front office oversight, which could lead to interesting subjects and approaches.

Case in point: the 1943 Women in Bondage (Warner Archive). It is not a prison picture, as the title might suggest, but one of Hollywood’s most harrowing anti-Nazi pictures. Gail Patrick is a proud and moral paragon of German womanhood who returns to the homeland after years abroad and finds her country under the spell of Hitler. While her husband (Alan Baxter), an SS officer, marches troops around the otherwise romantic little German village, she’s expected to take her place as a militant party woman, training young women to become proper paragons of Aryan maidenhood. Which includes, apparently, putting out for soldiers. It’s truly weird, a nightmarish mix of woman’s picture and scare film that paints Nazi Germany as a militant cult that practices Eugenics (“Only the physically perfect woman can be considered to marry the cream of German manhood,” proclaims one leader at a fitness exam) and outlaws baptisms (because babies should be dedicated to Hitler, not God). There’s no mention of concentration camps or the Final Solution here, and the religion under fire is Christianity, but it’s very much designed to outrage good American audiences.

While this comes from the Warner Archive line, it is actually a Monogram picture, a company that made a good living on cheap productions for a long time. Director Steve Sekely, a Hungarian émigré who fled Nazi Europe, surely brought his own animosity to the Third Reich to sell this picture. He managed to get use of a standing mittel European village set, the kind you might see in a harmless romantic operetta, and turn it into a twisted nightmare by decorating it with swastika banners and putting it under the police state occupation of jack-booted soldiers. It makes the film look a little more lavish than its budget would otherwise allow. 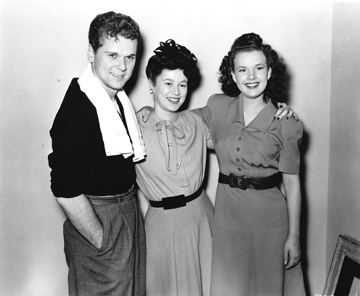 The rest of the films in this recent run of releases are also Monogram productions. Heading back stateside is Where Are Your Children? (Warner Archive), with Gale Storm as a good girl who slides into juvenile delinquency and Jackie Cooper as the all-American son of a privileged rich mother. While he goes to serve his country over the objections of mother, young Miss Storm falls in with a bad crowd and ends up pregnant and abandoned in the big city. It too is a war film in its own right. The 1943 production is social diatribe of kids running wild without supervision during the war, and ends with a stern lecture by a judge and bizarre happy ending thanks to the support of a benevolent community stepping in to take responsibility. For cult fans, note that the juvenile delinquent who steals a car and kills an old man on his joy ride is Neyle Morrow, soon to become a favorite of director Sam Fuller.