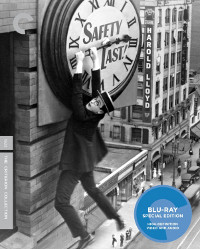 The image of Harold Lloyd hanging from the hands of a clock high above the Los Angeles city streets may be the single most iconic shot that says “silent movies” and “slapstick comedy” to the general public without further explanation. It is of course one of the great set pieces in Safety Last! (1923), the fourth and still most famous feature from the acrobatic silent comedy superstar.

Lloyd plays the small town swell trying to make good in the big city, putting on a show of success for his girl back home while scraping by as a department store at the fabrics counter, still waiting for his big break. He’s simply called “The Boy” in the credits but his pay stub puts his name right out there — Harold Lloyd — and why not? It’s a familiar variation in his repertoire as “the glasses character,” as he called the persona defined by his distinctive horn-rimmed glasses and Horatio Alger spirit. Whether rural or urban, he was the everyman trying to make his way in the world and win the girl. All of the great silent comics pretty created a defining screen character which they dropped into different situations. As popular as Chaplin and Keaton and even more successful financially, Lloyd was the modern man of the big three, the bright young man of the jazz age trying to carve out his piece of the American dream. Lloyd didn’t take directing or writing credit (Fred C. Newmeyer and Sam Taylor share the directing title card and Keystone komedy king Hal Roach is one of the screenwriters), but at this point in his fast-rising career he was, like Chaplin and Keaton, very much in charge of his films. He developed the stories, helped design the stunts, and made sure the production looked big and handsome and impressive.