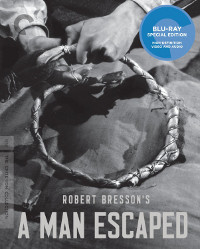 The film was released last week on Blu-ray and DVD, mastered from the original 35mm negative. Both editions of the disc feature a new visual essay, written by David Bordwell and Kristin Thompson, on Bresson’s use of sound and three archival documentaries on Bresson’s art and career. “Bresson: Without a Trace” was produced in 1965 for the French TV program “Cinéastes de notre temps” and features the first on-camera interview given by Bresson. “The Road to Bresson” is a 1984 appreciation featuring interviews with filmmakers Louis Malle, Paul Schrader, and Andrei Tarkovsky, and “The Essence of Forms” is a 45-minute documentary from 2010 that includes an interview with “A Man Escaped” star François Leterrier and Bresson cinematographers Pierre Lhomme and Emmanuel Machuel.

A clip of the visual essay, written by David Bordwell and Kristin Thompson is featured below.

To celebrated of the release of the first Bresson film to get a Blu-ray release in the U.S. (or, to the best of my knowledge, anywhere), we survey Bresson’s career through films available on disc or available for streaming on the web.

To the uninitiated Bresson can seem maddeningly indifferent—his films eschew the kind of dramatic spikes and psychological grounding of his contemporaries (the psychological intensity of Bergman seems downright flamboyant next to Bresson’s minimalist approach)—and even many cineastes are left cold by his remove. He systematically strips affectation and method from his performers by relentlessly drilling them in rehearsals until they master the mechanical, uninflected motions and line deliveries. They aren’t actors but “models,” taking a term from painting to describe their function in his filmmaking practice.

But give yourself over to his aesthetic and you find something that Paul Schrader described as “transcendental cinema.” Bresson seeks to reach the humanity of his characters, the soul if you will, by removing all barriers between the audience and performer.

Disappointed with the results of Les Anges de Peche (1943), recreated the very nature of cinema for himself in his own small way. In a mere thirteen features in his forty year career he carved out one of the most unique bodies of work in world cinema, a set of films both somber and celebratory in their search for grace. In the documentary-like scrutiny and detail in 1950s trilogy Diary of a Country Priest (1951), A Man Escaped (1956), and Pickpocket (1959) he masters his narrative control and ascetic approach with an increasing tendency toward fragmentation. His insistent close-ups isolate details not simply for clarity but to simultaneously foreground and distance action, and to break the kind of engagement audiences fall into with characters and stories.

After pushing these ideas to the extreme in the simultaneously stifling and sedate The Trial of Joan Arc (1961), Bresson turned around and invited the natural world into his films. The tightly orchestrated dramas of Au Hasard Balthazar (1966) and Mouchette (1967) play out in fields, forests, countrysides, and seemingly unrehearsed crowds of the world as we know it. With the 1970s, the aging Bresson turned his attentions to the youth of France in a series of films that are perhaps his least seen, including the Arthurian drama Lancelot du Lac (1974), and the alienated teen rebel drama The Devil Probably (1977).

By L’Argent (1982), his final film, he has creates the near abstraction of character and action within a fated universe (or near enough) of cause and effect. Yet what we ultimately see on the screen aren’t drones or robots or flat, uninflected amateurs, but characters under the thumb of life who show so little emotion that the slightest tick becomes an enormous, exultant explosion. Slowly, over the course of his films, these rote, flat performances come alive with a kind of truth very different from the psychologically motivated performances of even the greatest actors – not better or worse, but most assuredly different. Bresson ultimately takes us to a place only his films can, finding amidst the pain of life and the acceptance of death a state of grace.

Diary of a Country Priest is no longer available new (though you can still find it for rent in many disc rental stores with a commitment to world classics) but Criterion still offers Les dames du Bois de Boulogne, Pickpocket, Au hazard Balthazar, and Mouchette on DVD and A Man Escaped on Blu-ray and DVD.

Lancelot du Lac was released by New Yorker a decade ago but is long out of print (again, discerning video stores are your best hope here), and The Devil Probably was released last year by Olive in a frustratingly poor, non-HD edition.

On Hulu  Plus, which has an exclusive Criterion Channel, subscribers can stream all five Bresson films that Criterion has currently in print on disc plus two additional films that are still unavailable on disc: The Trial of Joan of Arc and L’Argent.