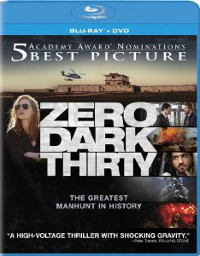 Zero Dark Thirty (Sony) has been praised as the best American film of 2012. It’s also been accused of justifying American torture of detainees and turned into a political football by members of congress demanding an investigation into the intelligence provided to the filmmakers by the administration.

That’s testament to the complexity of the film and the volatile nature of the subject matter. The direction by Kathryn Bigelow, who won Oscars for Best Film and Best Director in her previous film “The Hurt Locker,” is fierce and focused and Mark Boal’s screenplay grapples with the messy history of the eight-year-long intelligence operation to find Osama Bin Laden by refusing to make a spy thriller out of it.

As in The Hurt Locker, Zero Dark Thirty shows us what this kind war does to the soldiers in the field, in particular Jessica Chastain’s Maya, a fictionalized take on the real CIA agent who unrelentingly followed the slimmest of leads and synthesized seemingly unrelated pieces of information into a map that led to Bin Laden. But the focus is not on the personal sacrifice so much as on the enormity of the job and the tenacity of one agent (“Washington says she’s a killer,” is the one-sentence resume offered on her arrival) to doggedly follow the trail while the bureaucrats and politicians weigh resources and shift focus with each new threat. After the tension and anxiety builds through the investigation, Bigelow pays off with the raid on the compound, played out in real time without movie heroics.

This isn’t documentary, mind you, and Bigelow and Boal take some dramatic license in the details, but it’s in the service of exploring the real story of the investigation as well as the culture of intelligence work and the reality of agents in the field battling bureaucracy on the one hand and terrorists on their own home field on the other. It is intelligent, uncompromising, and utterly compelling, and it begins right off by showing the torture and waterboarding of a prisoner, a man that the lead interrogator (Jason Clarke) admits right off will never be released.

That’s the reality of the war on terror in 2003 and priority #1 is finding and capturing Bin Laden. By refusing to duck the role of torture, and even more daringly refusing to have Maya verbally condemn it, Bigelow drew some heat. While the government vainly tried to claim it somehow distorted American policy (when in fact the policy itself was distorted), others have charged that the film makes the case that torture was a successful tool, when in fact Bigelow and Boal show us that it never produced any information that wasn’t already gathered through other means, and failed to produce reliable intelligence on pressing threats.

Bigelow leaves it to us to draw our own conclusions — on the morality of torture as well as the effectiveness of it — and it appears to have become a Rorschach test for audiences. The controversy fueled interest in the film but it may have cost Bigelow an Oscar nomination for her direction, which by my measure is the most accomplished and the most gripping American film of 2012.

It was nominated for five Academy Awards, including Best Picture, Best Actress (Chastain), and Best Original Screenplay, and won for Best Sound Editing (shared with Skyfall), and it was the number one choice on MSN’s critics’ poll.

The Blu-ray and DVD both present four featurettes, all under ten minutes. “The Compound” is the longest of them and it is indeed a guided tour of the set built to serve as the Bin Laden compound. “Geared Up” looks at the equipment used by the actors playing SEAL Team Six and the training they went through for the invasion scene and “Targeting Jessica Chastain” is a brief profile of the Chastain and the character of Maya. Though brief, they offer a lot of detail on the preparation and research behind the production. The least of the supplements, in fact, is “No Small Feat,” which purports to be the “making of” production but is actually a four-minute promotional piece. The Blu-ray also features an UltraViolet digital copy for download and instant streaming. 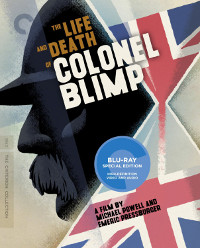 The Life and Death of Colonel Blimp (Criterion), an unconventional wartime drama from The Archers (director Michael Powell and screenwriter Emeric Pressburger), was made against the wishes of the British government and went on to become one of the most beloved British films of all time.

This dashing, deft epic begins with the dinosaur of an old soldier, Major General Clive Wynne-Candy (a curmudgeonly Roger Livesay in a bald cap and walrus mustache), getting ambushed by the new young army in an attempt to jolt the old man out of his outdated notions of a “gentleman’s war” against the Nazis, and then drifts back to show just how Candy got here. Livesay is warm and witty as an ambitious young officer with a prankster’s streak, who becomes devoted to his German rival (Anton Walbrook) and falls in love with a series of beautiful women (all of them played by Deborah Kerr), all the while petrifying as the world changes around him over the course of three wars.

Winston Churchill tried to stop the film from being made–he refused to release Sir Laurence Olivier (the filmmakers’ first choice) from service and prevented the armed forces from cooperating with the filmmaker–but made it was, in beautiful Technicolor and sweeping, grand style that defied the budget. Though it was cut in subsequent years, the BFI restored the film to its complete 163 minute running time and original flashback structure.

This is one of Martin Scorsese’s favorite movies and in 2011 the Film Foundation (an organization dedicated to film preservation that was co-founded by Scorsese) helped fund a new 4K digital restoration, which is the source of this new DVD edition and Blu-ray debut from Criterion.

New to the disc is a restoration demonstration hosted by Martin Scorsese, who explains the technology of three-strip Technicolor and the process of restoration (see the clip below), and a new half-hour interview with Thelma Schoonmaker, Michael Powell’s widow and Martin Scorsese’s longtime film editor, by Michael Henry Wilson.

Carried over from the previous DVD release is commentary by director Michael Powell and Martin Scorsese (originally recorded in 1988 for laserdisc) and the 24-minute “A Profile of The Life and Death of Colonel Blimp,” produced in 2000 for Carlton TV and featuring film historian Ian Christie, filmmaker Kevin Macdonald (grandson of Emeric Pressburger), and cinematographer Jack Cardiff (among others), plus a collection of Sir David Low’s original “Colonel Blimp” cartoons, and behind-the-scenes and production stills from Michael Powell’s private collection. Also includes a booklet with a new essay by Molly Haskell. 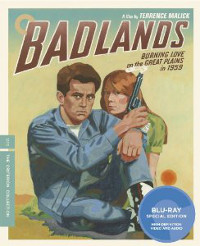 Badlands (Criterion), Terrence Malick’s assured debut feature, draws on the true story of spree killer Charlie Starkweather and his 14 year old girlfriend. Martin Sheen is the unstable 25 year old who kills the father (Warren Oates) of girlfriend Sissy Spacek and hits the road in a doomed attempt to find some romantic idyll in the sunset. Beautifully shot on the American plains, Malick contrasts the matter-of-fact killings by the increasingly unpredictable Sheen with banal, oblivious narration in a hopelessly romantic tenor by Spacek. The utter meaningless of their actions creates the real horror in this anything but romantic take on the “criminal couple on the road” genre. 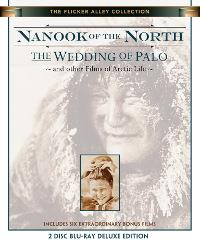 Nanook of the North (1922), is considered the first great nonfiction film, even though most of it was staged for the cameras. Director Robert Flaherty, often cited as the godfather of documentary filmmaking, discovered that the culture he wanted to show no longer existed so he recreated for the camera with the Inuit “subjects.” Flaherty and his actors deliver a drama of survival in a severe and unforgiving environment, and though it may seem naïve by modern standards it remains moving, involving, and quite beautiful. David Shepard restored the film in 1972 and this disc is mastered from a fine grain master of that restoration.

The full title of this set is actually Nanook of the North / The Wedding of Palo and other films of Arctic Life (Flicker Alley) and it indeed supplements the headline feature with plenty of archival extras. The Wedding of Paolo (1934), a Danish documentary on the native Inuit culture of East Greenland by Danish explorer and anthropologist Dr. Knud Rasmussen, is “Nanook”‘s natural companion piece, another portrait of a vanishing culture. A more literal companion piece is “Nanook Revisited” (1988), an hour-long TV documentary that revisits the locations of “Nanook” to see the changes after seventy years. There are also five archival short films: “Captain Kleinschmidt’s Arctic Hunt” (1913), “Primitive Love” (1927), “Houses of the Arctic” (1928), “Eskimo Hunters of Northwestern Alaska” (1949), and “Face of the High Arctic” (1959). The two-disc Blu-ray also featuring a booklet with essays on the two historical features and notes on the other six films.

More releases and reviews at Videodrone on MSN Entertainment