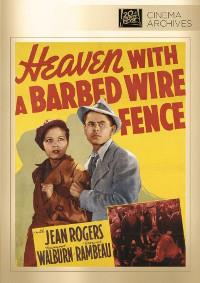 Glenn Ford made his feature debut in this 1939 populist drama, a road movie about riding the rails across America in what would be the final years of the Depression. While he’s fourth billed (behind Jean Rogers, Raymond Walburn, and Marjorie Rambeau), he’s the star of the picture, a working class Joe from New York City who spends his entire savings on a ranch in Arizona (sight unseen but a gorgeous pamphlet!) and rides the rails to get to his too-good-to-be-true dream place. This is the tough, defiant Ford that became the grim, urban tough guy of Gilda and the calloused cowboy loner of numerous westerns in protean form, not even 25 years old but already with a chip on his shoulder and the obstinate attitude of a guy who has taken care of himself for so long he figures he knows it all.

The film is directed by Ricardo Cortez, longtime romantic leading man and character actor (and the first Sam Spade in the 1931 “The Maltese Falcon”), during a brief burst of filmmaking in the B-unit of 20th Century Fox when good roles were getting scarce, and written by Dalton Trumbo before he graduated to the top of the screenwriting ranks. But if it’s a B-movie by definition — it runs a mere 65 minutes and makes the most of minimal resources: New York is a stock street set surrounded by stock footage, hobo camps and rail-side meadows are tiny studio sets with painted backdrops, and the few location shots are surely just down the street from the studio lot — it’s a B-movie with ambition.

This slice-of-life story on the road is a piece of American populism with a different brand of optimism and pluck than the sentimental Capra-corn of “Meet John Doe.” Joe is a street-smart guy with a go-it-alone attitude tossed into a world he hasn’t the first clue how to navigate. A flop as a hitchhiker, he hops a boxcar and gets a quick education from veteran hobo Tony (Richard Conte, making his own film debut under his given name Nicholas Conte). Before he knows it he’s formed a family on the road with Anita (Jean Rogers), an illegal immigrant from Spain (though her contrived broken-English accent sounds more Dutch than Spanish), and The Professor (Raymond Walburn), a former academic on hard times with the patter of a con-man and the heart of a philanthropist. Along the way, they pass through a hobo camp (where Ward Bond has a bit as a brawny brute), a saloon that could have come from the old west, and a Russian Orthodox community that opens their arms and their culture to the crew. None of Capra’s corrupt fat cat industrialists or fast-talking reporters looking to rib the rubes here, just folk trying to get by.

And along with the melting pot of immigrant America and rural decency is a jab of international politics: Anita is an orphan of the Spanish Civil War, fleeing the Fascist forces that killed her parents and took her family farm. Just the kind of thing that Trumbo could slip in as long as he didn’t mention names or make a speech of it. As far as that goes, the term “Depression” is never uttered, which was surely not necessary for audiences who recognized the reality of hard times, scares jobs, and armies of homeless shown in screen.

This quartet navigates hunger and homelessness, railroad bulls and hobo bullies, a gunshot wound, an arrest warrant, and more, but for all the hardships and setbacks, “Heaven” maintains an optimistic sense of American generosity and acceptance in hard times. Joe can’t go it alone after all — what does a city boy know about ranching and farming in the southwest climes? — and he doesn’t need to. He’s got family.

The print is perfectly acceptable, not restored but decently preserved and mastered and as good as anything that 20th Century Fox Cinema Archives has debuted to date. There’s minimal wear on the print and the soundtrack and solid, stable image.

More releases and reviews at Videodrone on MSN Entertainment