Continuing our tribute to the best of 2012, here are my picks for the top TV releases on disc. 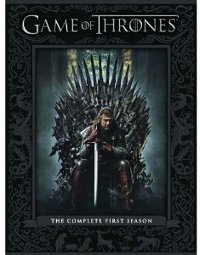 1. “Game of Thrones: The Complete First Season” (HBO) – Pay cable is always looking for the next buzz show, a series that gets people talking, watching and subscribing. “Game of Thrones,” the epic fantasy set in a medieval world of warring kingdoms, cutthroat royal families, barbarians, dragons, and some undefined evil kept at bay (at least up until now) behind a massive wall taller than a skyscraper, is such a show. This complex, intelligent, and visually impressive production is the most lavish fantasy epic TV has ever seen. This could be a fanciful take on Europe of the Dark Ages but for the echoes of supernatural forces massing outside of the borders. The casting is superb, the production looks amazing, like a medieval epic shrouded in the shadow of a winter storm, and the writing is intelligent and always surprising. Like so many HBO shows, it takes its time unfolding its story and doesn’t follow the expectations of TV storytelling (major characters are constantly sacrificed to the ruthlessness of the story), but it casts its spell from the opening scenes.

The disc release is as lavish as you could hope, with solid commentary tracks and plenty of interesting featurettes and interviews, and the Blu-ray includes an interactive “In-Episode Guide” viewing mode and the superb “Anatomy of an Episode” mode that offers the sixth episode with a fully integrated audio-video commentary track with video interviews, storyboards, and other picture-in-picture supplements. (Full review here)

2. “Homeland: The Complete First Season” (Fox) is the first Showtime original series to take on HBO in the realm in which the latter dominates: dense, challenging, intelligent drama. This show, adapted from an Israeli TV series called “Prisoners of War” about contemporary POWs struggling to find their place when they return home, was developed for American audiences by its Israeli creator Gideon Raff with Alex Gansa and Howard Gordon of “24” and cast with two superb actors in the lead: Claire Danes as a CIA analyst who has trouble working well with others and Damian Lewis as an American Marine back home after eight years of captivity under Al-Qaeda and may be a sleeper agent. This incarnation is wrapped tightly in the war on terror and the American intelligence culture, but behind the realpolitik thriller is also the story of war and captivity takes its toll on the folks on the front lines. The actions and decisions of its characters puts issues of patriotism, faith, and responsibility to family into focus in ways we don’t often see. The first season earned six Emmy awards. (Full review here)

3. “Mildred Pierce” (HBO) is less a remake than a new run at adapting the James M. Cain novel. Previously made into a Hollywood classic (which earned Joan Crawford her only Oscar), it’s been transformed into a five-hour mini-series by Todd Haynes, who casts Kate Winslet in the title role as the mother blindly devoted to her sneering, status-conscious daughter. There’s none of the murder mystery plot that Hollywood added to the depression-era melodrama. This is a character study in maternal sacrifice, a skewed success story rooted in guilt and damaged self-esteem and powered by willful blindness of her daughter Veda’s (Evan Rachel Wood) evolution and her own compromises. The mini-series form has largely migrated from the networks to cable, and HBO is the perfect place for such an adult production. Superb. (Full review here)