While you can find many of the best Blu-ray releases in my countdown of the Top Ten disc releases of 2012, this is a list of the top Blu-ray debuts of films previously available on DVD only, upgraded with new transfers and digital masters. 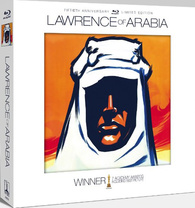 How does this look? To quote T.E. Lawrence: “It’s clean.” Yes, and it’s clear and sharp and strong, as beautiful a Blu-ray as you’ve seen. The original camera negative was scanned at 8k, creating an enormous digital snapshot of every frame of film to work from, and then the finished production was “down-rezzed” to 4k for digital projection and digital mastering on Blu-ray. It’s packed with supplements, including the never-before-release?d extended version of the “Balcony Scene” with Peter O’Toole and Jack Hawkins, a sequence that Lean was unable to put back into his reconstruction due to missing elements. The producers of the disc have not inserted it into the film — for better or worse, the version presented here is the one that Lean signed off on in 1989 — but this sequence is legendary among “Lawrence” fans and editor Anne V. Coates puts it in context in a video introduction. Finally seeing it is a true pleasure. (Full review here) 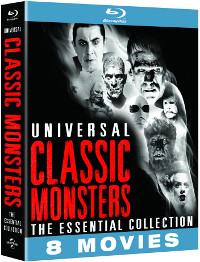 2. “Universal Classic Monsters: The Essential Collection” (Universal) presents the long-awaited Blu-ray debuts of the most famous Universal monster movies from the thirties through the fifties: “Dracula” (1931) with Bela Lugosi, “Frankenstein” (1931), “The Mummy” (1932), and “The Bride of Frankenstein” (1935) with Boris Karloff, “The Invisible Man” (1933) with Claude Rains, and “The Wolf Man” (1941) with Lon Chaney Jr., plus the Technicolor “Phantom of the Opera” (1943) with Claude Rains and “Creature From the Black Lagoon” (1954) from the fifties era of Universal monster movies, a ninth feature — the 1931 Spanish language “Dracula” — and the 3D version of “Creature” (requires a full HD 3D TV, compatible 3D glasses, and a Blu-ray 3D player). It presents magnificent new HD masters of each film, all with a significant leap in detail, sharpness, and contrast from the previous (superb) DVD editions. The earlier films are the most impressive, given their age and the results on screen. Great care was lavished in the sets, lighting, and make-up of these films and these editions preserve the depth and detail and texture of this era’s studio filmmaking. I love the richness of black and white on a well-mastered Blu-ray and these are superb. Universal does this one up right, complete with a treasure trove of documentaries, commentary tracks, and more. (Full review here)

3. “Jaws” (Universal), Steven Spielberg’s meticulously-directed, tension-filled, career-redefining thrill machine, has been pegged as the original modern summer blockbuster. And while that is true, this pop-culture masterpiece is more than simply a well-tooled thriller. Spielberg brings a sense of community, family, and humanity to the supermarket thriller from Peter Benchley, a book more designed than written. This is an elemental monster movie as well-tooled thriller invading the comfort zone of the suburban summer vacation. The restoration and digital transfer are top notch and the Blu-ray debut features the legendary, years-in-the-making documentary “The Shark is Still Working: The Impact and Legacy of Jaws” along with the previously available supplements. (Full review here)

4. “Casablanca” (Warner) is a beauty of a special edition. For the 70th Anniversary, Warner has remastered the film in a 4K scan (theatrical big screen quality) for a three-disc deluxe Blu-ray+DVD Combo edition with two new documentaries plus all the supplements of the previous special editions (and there have been many). The transfer is an improvement over the 2008 Blu-ray release, with greater clarity and detail and a sensitivity to the original black and white film that preserves the texture of the original without drawing attention to the grain. (Full review here)

5. “Bond 50” (Fox) – The best-selling Blu-ray box set of 2012 presents five decades, six James Bonds, and 22 films in this deluxe box set: the complete official James Bond series to date, from “Dr. No” (1962) to “Quantum of Solace” (2009), including the Blu-ray debuts of nine classic Bond films and over 120 hours of bonus features! (This does not include the non-series “Never Say Never Again” or the 1967 Bond spoof “Casino Royale.”) It’s also the most efficient and logical packaging of the films to date. Though I do with the case include at least the film credits and the supplements on each disc. (Full review here)