The Hollywood Reporter details the role former publisher Billy Wilkerson played in the blacklist, a mea culpa they admit is painfully overdue even as they kind of fudge it with a series of who-can-say shrugs about the paper’s impact towards the end. Included is a photo gallery of surviving blacklist victims that ends with Kirk Douglas, because white hats and happy endings, you know? Via Movie City News.

“But like any good student of Gurdjieff or Stanislavsky or Freud, Ray had come to his teachers with a question that was all his own, and had come away each time with a better version of his question: how can people—two people, or multitudes—love one another, to quote King of Kings?” Bill Krohn’s magnificent close reading of Ray’s We Can’t Go Home Again may not convince you of the film’s greatness, but he forever places it firmly amid the worried, questioning works the student-turned-teacher had made since the beginning.

In their latest discussion, Manohla Dargis and A. O. Scott take heart from a number of recent films that, success or failure, are pushing against formulaic storytelling conventions.

Most of said conventions, of course, are hawked and hammered home in books on screenplay writing, a how-to genre that has exploded in recent years. Jonathan Zimmerman spent some time under their spell, and has returned to tell the tale.

Among other delights, the new issue of Experimental Conversations—spotted by Girish Shambu—has Fergus Daly drawing a dense portrait of film noir’s godless morality (and showing off an encyclopedic affinity for telling bits of dialogue); two articles kicking off a series by David Brancaleone on the underappreciated legacy of neorealist screenwriter Cesare Zavattini (part two here); and part two of Jit Phokaew et al.’s survey of Thailand’s alternative cinema.

At Film Comment, Maggie Hennefeld runs down her highlights of the recent Pordenone Silent Film Festival, which includes the rescue of Anna Sten from her relegation as a Cole Porter punchline.

Two stabs at critical reevaluations at Criterion: Giulia D’Agnolo Vallan does the heavy lifting for Heaven’s Gate, while more amusingly Chuck Stephens considers four of Shochiku’s horror films and wonders how at a minimum, with its “chaotic emotions, nightmare commotions, pulsating psychedelic lights, mercurial space slime, and newsreel images of blood- splattered combat forces,” Goke, Body Snatcher from Hell hasn’t “been recognized as the greatest film of all time.”

On Heaven’s Gate revisionism, Artforum’s Howard Hampton does a far better job, by skipping the formal arguments and going straight for the reverie, a sympathetic engagement that leads to such out-of-the-blue observations as how “even a bloody cow carcass dragged over a muddy enclosure leaves a painterly stain.”

“Well, I was going to do this myself, but…. Paint me, Chris. They’ll be masterpieces!” Michael Atkinson salutes Joan Bennett, and offers the intriguing suggestion that her “cocktail of woundedness and remorseless danger” would have made her perfect for a gloomily conspiratorial Irma Vep-style antiheroine if anybody in 1940s Hollywood had been looking around for one.

“Kids are neurotic, kids deal with fear, kids are confronted by really hostile impulses from the adults around them and the other kids, and you know, movies should acknowledge all this and create these fables that help them deal with those things.” Guillermo del Toro tells io9’s Charlie Jane Anders what’s missing from too many children’s movies. (Surprise, it’s horror.)

“Novels can dabble in flashbacks and backstory, although even that gets very, very labored and it’s overvalued. But films shouldn’t ever touch it…. It makes every story into a biopic, which is the worst genre film Hollywood ever generated, until the superhero film.” Jonathan Lethem discusses movies—the ones that have influenced him, the unmade adaptations of his novels that have financed his writing, the things they do better than books—with Fandor’s Jonathan Marlow.

From intertextual references graffiti’d on a wall to a Louvre display that could never have existed, Roland-François Lack finds playful blendings of reality and artifice throughout Melville’s Un flic, beyond just the notorious model train and

In 1986 Mitsubishi hired photographer Norman Seeff for an ad campaign involving portraits of movie directors. Whatever the commercial impetus, the images are quite marvelous, from Jim Henson’s expressive hands to the sulfurous plume of smoke streaming from Bob Fosse’s lips. Via Criterion.

Video: Kevin B. Lee’s video essay on five tracking shots in P. T. Anderson pictures is worth watching in its own right, but even more so for M. J. Schneider’s thought-provoking (written) response, which offers a more nuanced reading of the shots as characters reacting to/defined by space before wondering if the project isn’t freighted too much by auteurist expectations—or if it’s even possible to discuss such matters outside of that context anymore.

Richard Robbins, who composed the scores for nearly every James Ivory feature since The Europeans in 1979, died at the age of 71. Ronald Bergan at The Guardian.

Film critic and historian Elliot Stein, whose work appeared in Village Voice, Rolling Stone, Sight & Sound, Film Comment, and Financial Times, among other publications, passed away at the age of 83. Jonathan Rosenbaum remembers his friend and colleague. 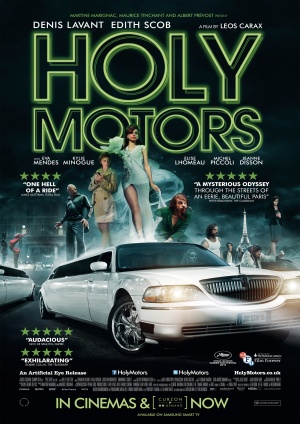 Holy Motors makes its much anticipated Seattle debut at The Varsity. Sean Axmaker reviewed it at Fandor here: “Behind these unrestrained journeys into all manner of mini-movies is an anxiety over the future of filmmaking and a fear of exhaustion (physical and creative) by the filmmakers, but the determination to keep creating these dreams and the sheer physical commitment to each performance is its own answer. But beyond that is the exhilaration of Carax’s flights of fantasy…”

Jack and Diane opens for a week at Northwest Film Forum. Kathleen Murphy reviews it here.

Café de Flore, from Quebecois filmmaker Jean-Marc Vallee, opens for a week at The Uptown.

Grand Illusion is screening a new 35mm print of Alfred Hitchcock’s Vertigo for a week-long run.

The weekly links page is compiled and curated by Bruce Reid, with obituaries and Seattle Screens curated by Sean Axmaker, and other contributions from friends of Parallax View