“Horror simply wouldn’t exist without the possibilities for poor choices and wrong avenues. Horror leads you down a path that’s been less taken for a good reason.” ‘Tis the season. Reverse Shot kicks off its annual suggestion of horror movie viewing with Michael Koresky’s fine appreciation (and source for the quote) of Lewin’s The Picture of Dorian Gray. Kevin J. Olson’s Italian Horror Blog-a-thon is underway till Halloween; so far from his contributors some jokey plot summaries, some nice appreciations (like Neil Fulwood on Lenzi’s Jonestown-exploiting Eaten Alive!), and no dearth of NSFW film stills. Dennis Harvey recommends Jess Franco even while correctly cautioning his readers they’re facing a success rate of about 1 in 12. And in the overgenerous spirit typical of the holidays, the Movie Morlocks’ HorrorDads zoom past the traditional double-feature to each offer a triple-length screening selection: one for the kids, one classic, one “pitched at the horror lifers…. No punches pulled, no quarter given, fangs bared.”

“There was one of the first warnings about the generation of young directors who had been to film school, or only to the movies all their life—was it possible they knew too little to deal with human realities? If so, there was an available answer poised: delete the complexity of the realities.” In an excerpt from his latest book The Big Screen, David Thomson is still, 37 years after Jaws, trying to figure out Steven Spielberg, and whether he can transcend the liabilities of his “determined youthfulness.”

“The earliest group of underground directors—which included Zhang Yuan, Wang Xiaoshuai, Lou Ye and Jia Zhangke, and emerged between the late 1980s and 2000—was dubbed the “Sixth Generation” by western film critics. It no longer exists. Most of the directors now submit to the system or have lost their creative power.” Film producer and festival programmer Zhu Rikun on the crippling obstructions and government interference that have pretty much silenced independent Chinese film, in an issue of New Statesman guest-edited by Ai Weiwei.

“A writer who’d dreamed him up wouldn’t be standing in line for any Oscar, no sir. This character breaks all the rules of drama. For a start, he has no arc. Stick with me, this is gold dust, I learned it in Hollywood.” Bill Forsyth notes the similarities between his own Local Hero and You’ve Been Trumped, Anthony Baxter’s documentary on Donald Trump’s maneuvers to open a Highlands golf course; and also the differences, beginning with the unrealistically callous, colorless villain in Baxter’s movie.

The Awl’s Carrie Frye reexamines Tippi Hedren’s animal activism and self-financed predator movie Roar as response to being the prey in and on the set of two of Hitch’s most troubling films. Via David Hudson.

In the LA Review of Books, David Ehrenstein remembers his friend, experimental filmmaker Warren Sonbert, and wonders how well any of his friends really knew the film diarist.

To prepare us for the latest rediscovered master, Film Comment’s Sarah Mankoff offers brief notes and a glittering collection of film clips on the comic stylings of Pierre Étaix.

And by all accounts (well, the three I’ve read so far) an emerging master is on display at the Museum of the Moving Image’s retrospective of Filipino filmmaker Raya Martin, at 28 already a mercurial, indefinable figure. MoMI’s own Phil Coldiron offers a good rundown, if you don’t mind writers who toss off a phrase like “the Deleuzo-Godardian notion of Hollywood”. L’s Steve Macfarlane has a more straightforward introduction, while Mubi’s Adrian Mendizabal provides the most context for Martin’s film’s, and the widest survey of their disparate methods.

“Well, the, uh, mattress is soft and there’re hangers in the closet and stationary with Bates Motel printed on it in case you want to make your friends back home feel envious, and the, uh….” The latest movie space explored in Mehruss Jon Ahl and Armin Karaoghlanian’s clever journal Interiors is the most infamous motel room in movie history.

Summing up the work of George Lucas, Camille Paglia makes some good points about the genuinely unparalleled level of control he exerts over his Gesamtkunstwerke and the avant-garde gestures he sneaks in, even if her championing him as the great artist of our time is merely an epic new height in her tendency to troll.

“I have always believed, both personally and in my scripts, in the triumph of the human spirit.” The funniest thing about Joe Esterhaz’s infamous 1989 letter to Michael Ovitz, wherein the writer reaffirmed his commitment to move to a new agency and called out Ovitz’s bullying tactics, is how insistent Esterhaz is on recasting this millionaires’ power struggle as something out of a movie about gangsters. With guess who as the golden boy?

“He’d call and say, ‘You gave me a list of all the theaters and I have photographs of them. This one doesn’t have good parking and the screen isn’t very good in this theater in Denver!’ I’d say, ‘How do you know about this theater in Denver?’ So this was not a man who just went out and made a movie.” Terry Semel and Tom Cruise remember working with Stanley Kubrick—and offer perhaps self-serving recollections on the ratings controversy around Eyes Wide Shut—with Interview’s Annette Insdorf.

“It was not capturing light properly, so I would slow the frame rate and push up the gain to try and paint with it and try interesting things. I showed Jean-Luc this and I think he really liked this idea of defect over quality.” Mubi’s Adam Cook offers a fascinating, surprisingly technical interview with Godard’s current cameraman Fabrice Aragno.

Srikanth Srinivasan offers a lovely collection of stills from films where men gaze rapturously at unattainable ghosts; Hitchock and De Palma, sure, but Marker and Oliveira make their appearance as well.

Adrian Curry’s contribution to the Étaix revival with a generous roundup of his movie posters—along with the information that, in his early days as a designer himself, Étaix created the famous silhouette, pipe and chin jutting at sharp angles, instantly recognizable as Hulot.

Audio: Film Comment presents two early radio collages—on aging and memory, and “the intersection of food, language and sex on the tip of the tongue,” by The Loneliest Planet director Julia Loktev.

Russell Means, the American Indian activist with Oglala Sioux nation and sometime film actor, died of cancer this week at age 72. Among his most famous screen roles are Chingachgook in Michael Mann’s The Last of the Mohicans and the voice of Powhatan in Disney’s animated Pocahontas. His long life and controversial career is covered by The New York Times.

Respected Swedish actress Anita Björk rose to fame in the title role of Alf Sjöberg’s 1951 Miss Julie. She worked with directors Ingmar Bergman, Mai Zetterling, and Bille August was courted by Alfred Hitchcock to star in I, Confess (the role went to Anne Baxter) in a career that spanned over 60 years on stage and screen. She passed away at the age of 89 of cancer. Jon Asp at Variety.

Yash Chopro, the Bollywood director dubbed the King of Romance, died in Mumbai this week at age 80. David Hudson collects obituaries and remembrances at Fandor’s Daily.

Opening at NWFF this week is Ben Rivers’ Two Years At Sea. Part documentary, part staged experience, part meditative portrait of a hermit living of the grid in rural Scotland, this debut feature from experimental filmmaker Rivers is all about texture, from the beauty of the B&W 16mm widescreen photography (Rivers hand-processed his film, which gives the image a distinctive pulse) to the pace of life unfolding for this man alone. It’s a narrative only in as much as one scene follows another. Otherwise, it could a still life in motion, captured forever in Rivers’ frame. Rivers will appear at the Friday screenings. 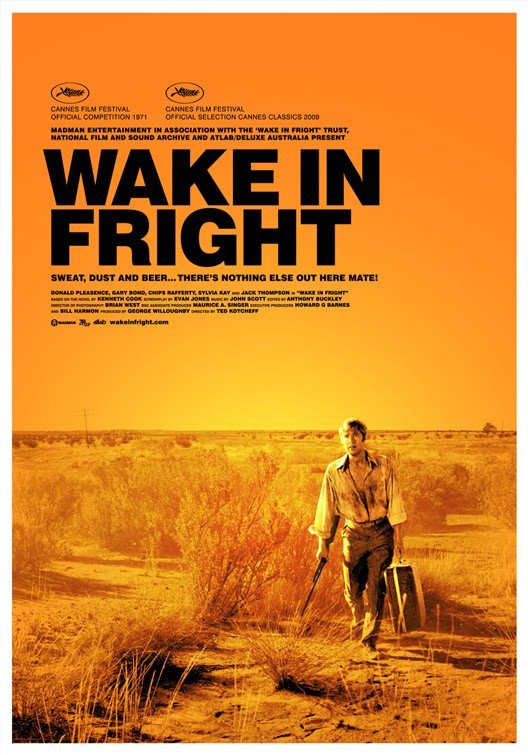 Wake in Fright, the 1971 thriller from Australia that has been cited as a pioneering entry in the nascent Australian New Wave, opens for a week at SIFF Film Center. “It’s clearly a seminal piece of work,” writes John Hartl in The Seattle Times.

Also at SIFF Film Center, playing earlier in the evening, is Fat Kid Rules the World, the family-friendly directorial debut by Matthew Lillard. He’ll be participating in a post-screening Q&A at the Friday and Saturday shows via Skype.

Grand Illusion’s “All Monsters Attack” October series concludes this week with a four-day run of Wallace & Gromit: The Curse of the Were-Rabbit (on 35mm, befitting a shot-on-film stop motion animation production), a couple psychotronic collections of oddities and rarities, and a Friday triple feature of the Hammer/Show Brothers collaboration The Legend of the 7 Golden Vampires (1974), the zero-budget American-made The Deadly Spawn (1983), and the Spanish The People Who Own the Dark with Paul Naschy. Schedule here.

More repertory screenings: For Halloween, the Uptown is showing Ghostbusters and the 1954 3D feature The Mad Magician with Vincent Price on Tuesday and Wednesday and What Ever Happened to Baby Jane? on Thursday, the day after Halloween. Showtimes here.

Not Halloween related, but definitely on the dark side, the Seattle Art Museum’s Film Noir Cycle is underway. This week is one of the best: Nicholas Ray’s In A Lonely Place (1950) with Humphrey Bogart and Gloria Grahame screens on Thursday, November 1. On 35mm, of course, in living black and white. Passes are sold out but there are always some single tickets available at the door.

In conjunction with the Seattle Art Museum’s “Elles: Women Artists from the Centre Pompidou, Paris,” SAM launches “Woman with a Camera: The Films of Agnès Varda,” a three films series beginning Friday, October 26 with Cleo from 5 to 7.

Opening for regular runs this week: the sprawling Cloud Atlas adapted and directed by Lana and Andy Wachowski and Tom Tykwer, the new French version of the classic book War of the Buttons, and the documentary The Other Dream Team about the Lithuanian basketball team at the 1992 Olympics.