“Nothing’s riding on this except the, uh, first amendment to the Constitution, freedom of the press, and maybe the future of the country. Not that any of that matters, but if you guys fuck up again, I’m going to get mad.” The new issue of the DGA Quarterly perhaps misjudged how election fever would grip this nation, but any excuse for their survey of political films will do. One of their arguments is that such topics are best handled now by television, with interview subjects including The West Wing‘s Thomas Schlamme and Homeland‘s Micheal Cuesta. But there’s also Alan J. Pakula on the making of All the President’s Men (first published in 1976); Oliver Stone recounting the editing trickery that allowed him to pull of the convention scene from Born on the Fourth of July; and a delightful collection of production shots (downloadable as a .pdf) ranging from Rob Reiner in the Oval Office to Otto Preminger the very model of humility standing on the Capitol parking lot. Via David Hudson.

“When he heard the news that James Dean was dead, Jim Mac and his friends, thirsty in a dry county, stole across the county line to Palarm Liquor. They drove back north to Toad Suck Ferry, and on an Arkansas River sandbar, they downed spirits, engaged in a mud fight, and from the dirt, they built Academy Awards for the ghost of Jimmy Dean.” Tyrone Jaeger’s look at the inspiration behind and making of September 30, 1955 is steeped in Southern detail that eludes most articles about James “Jim Mac” Bridges. No surprise, considering Jaeger’s blog is written for the Oxford American.

Following up his recent interview with Side by Side director Chris Kennealy, John Bailey rounds up a baker’s dozen of movie professionals—including Caleb Deschanel, Ken Burns collaborator Buddy Squires, and the charmingly named president of the ASC, Stephen Lighthill—for their thoughts on film, video, and the brave new world we’re entering.

One highlight of the Pordenone festival was the screening of Méliès’s restored Les Aventures de Robinson Crusoé, its narration and vivid colors apparently intact, as Pamela Hutchinson reports.

Also at The Guardian, premiere screenings of another kind, staged in warehouses and only announced by text message, as David Batty examines samizdat cinema in Saudi Arabia, a country with no official movie theaters.

Reflecting on the latest flare-up of death-to-snobbery film-culture wars, Nick Pinkerton remembers the bad old days of the ’80s, when Straub-Huillet and Syberberg where household names and Raul Ruiz had them lining up at the multiplex.

“[Dmytryk] recalled his preparation for a “flash” scene—a scene lasting no more than a second or two on the screen—the scene called for Monty to enter the room and see his baby for the first time. Monty practiced opening and closing the door countless times; he tried it abruptly, tentatively, fearfully, joyfully, excitedly, all to find the one entrance which would convey exactly the emotion he wanted.” Sheila O’Malley’s birthday salute to Montgomery Clift is a rich cornucopia of quotes from the actor’s friends, co-workers, and in this case biographer, Patricia Bosworth. 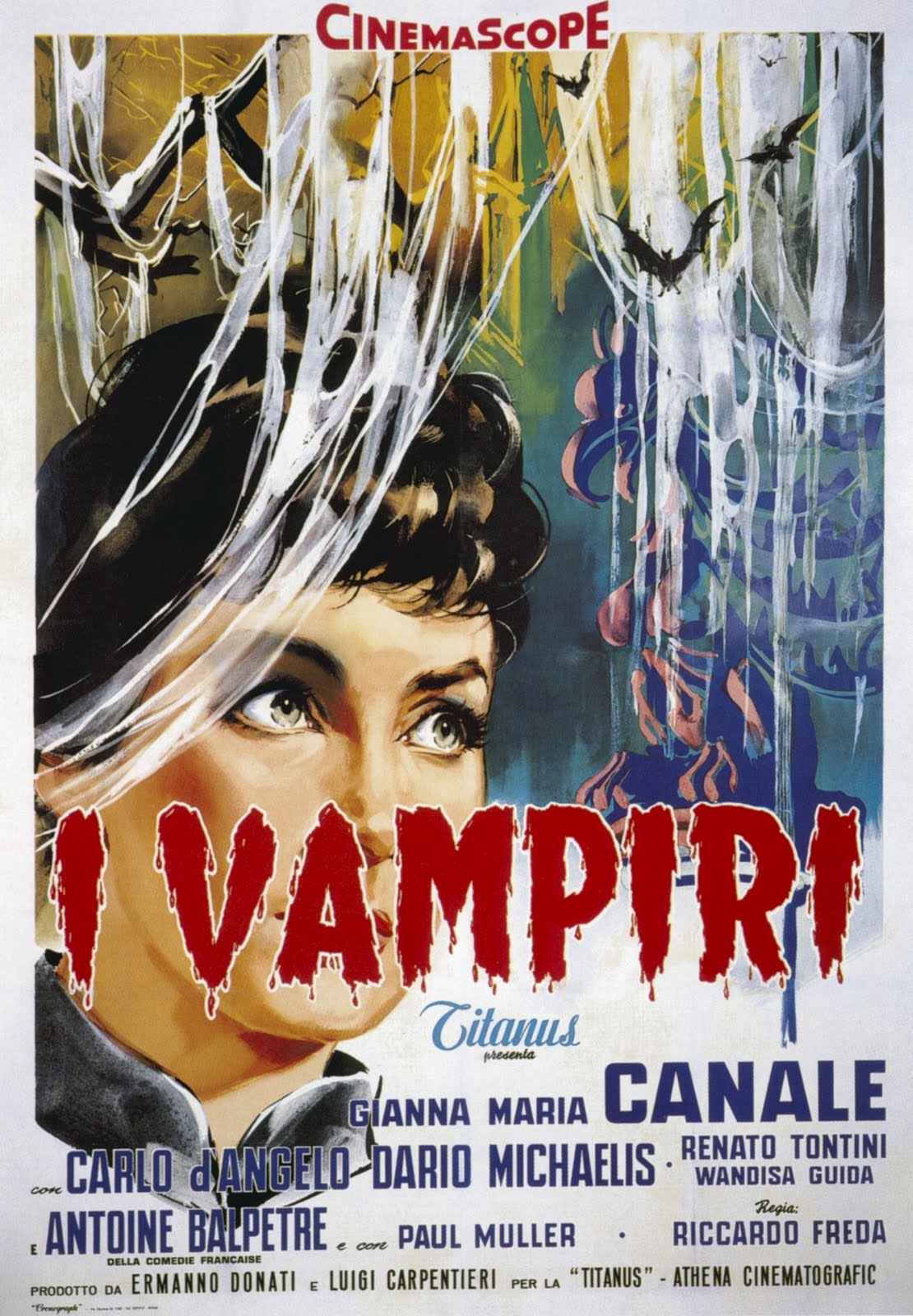 In preparation for the Italian Horror Blog-a-thon he will be hosting next week, Kevin J. Olson offers an overview of a field that has ever pushed for new outrages even as it swerved from subject to subject based on market whims. I’m not informed enough to vote yea or nay on Olson’s crowning The Living Dead at Manchester Morgue the greatest of all zombie films, but his picking What are Those Strange Drops of Blood Doing on Jennifer’s Body? as the greatest title seems nigh-unassailable.

Susan Doll argues the unconventional, nonstereotyped figure that Barbara Stanwyck cut in her westerns makes up for whatever filmmaking deficiencies mar the lesser films (and only helps the oddness of masterpieces like Forty Guns).

Speaking of, John D’Amico’s list of 35 unheralded great Westerns maybe could offer more than one or two sentences to justify each choice. But those sentences are pretty good (“Because there’s a whip fight. What’s more important than that?”), and any list of the genre that includes the directors Margheriti, Corman, Borzage (twice), and Ray Milland is taking its mission to go off the beaten path pretty seriously.

“The more that [images] get codified, stereotyped, made to look like publicity; more trouble will brew under the surface until it explodes. Explosions happen, especially in The Fury.” Continuing his translations from Cahiers du Cinéma, David Davidson offers a 1981 roundtable on Brian De Palma he marks (somewhat inaccurately, according to a commentator on the blog) as the turning point in the director’s reputation with the journal.

“I’m almost 38. I’ve been acting for 30 years. But I still get nauseous the day before and have weeks of incredible anxiety. They have to put fucking pads in my armpits because I sweat so much that it just drips down my wardrobe.” Joaquin Phoenix’s Interview Magazine sitdown with Elvis Mitchell is full of grand, almost naively truthful pronouncements beyond just his (grand, naively truthful) thoughts on the uselessness of awards.

As infographics go, The Economist’s tallying of each individual Bond’s propensity to martini, boff, or kill hits that sweet spot of utterly useless knowledge you’re delighted to finally have at your fingertips.

Will Schofield posts some art deco movie posters from 1930’s Sweden, with striking designs and some lovely caricature work (of Keaton and Crawford, separately of course, in particular). Via Criterion.

Video: The Walker Arts Center website debuts Apichatpong Weerasethakul’s Cactus River, a diary of his visit to an actress friend, and the waters that surround, sometimes threateningly, her contented domestic island. Again (and always), spotted by David Hudson.

Kôji Wakamatsu, the insanely prolific director whose almost 60-year career began with exploitation movies in the Japanese studios of the creatively turbulent sixties and continued on through 2012, passed away this week at the age of 76, after he was struck by a taxi. His films include the pop-art exploitation thrillers Go, Go, Second Time Virgin (1969) and Ecstasy Of The Angels (1972) and the recent historical drama Red Army Faction (2007), among his only films available on disc stateside. More from The Celluloid Liberation Front at The New Statesman. And more remembrances, tributes, and considerations gathered, as usual, by David Hudson at Fandor Daily.

Eduardo de Gregorio, the Argentine-born director and screenwriter who collaborated with Bernard Bertolucci on The Spider’s Stratagem and Jacques Rivette on three films, including Celine and Julie Go Boating, passed away this week in Paris at the age of 70. Jonathan Rosenbaum pays tribute to the man and his work, as a director as well as a screenwriter, at his website.

Russian screenwriter Eduard Y. Volodarsky, whose provocative films include Aleksey German’s Trial of the Road and My Friend Ivan Lapshin and Nikita Mikhalkov’s At Home Among Strangers, died at age 71. Andrew Roth at The New York Times.

Hong Kong screenwriter Szeto Kam Yuen was a regular collaborator on Johnnie To’s Milkyway Image productions, including To’s Exiled and the To-produced Too Many Ways To Be No. 1, A Hero Never Dies, and Accident, passed away at the young age of 48. Reported at Far East Films.

British character actor John Clive, whose played opposite Michael Caine in The Italian Job and Malcolm Macdowell in A Clockwork Orange and voiced John Lennon in Yellow Submarine, died at the age of 79. Ben Quinn at The Guardian.

Shirley Clarke’s 1961 drama The Connection, a true indie film about a group of addicts waiting for their fix, won rave reviews at Cannes and weathered a rocky road to release thanks to censorship battles in the U.S.. It has been revived and restored by Milestone Films and NWFF is showing the film in a new 35mm print this week as part of NWFF’s Earshot Jazz Film Festival, the film contribution to the 2012 Earshot Jazz Festival playing through November 4 all over Seattle.

This month’s “Framing Pictures,” the monthly discussion with film critics Richard T. Jameson, Robert Horton, and Bruce Reid (sitting in for Kathleen Murphy), takes place Friday, October 15 at 5pm at NWFF. Come and join the discussion (Jameson suggests some of the talking points here). It’s free. And you can follow the discussion on Facebook too.

Along with the Grand Illusion’s “All Monsters Attack” October series (this week featuring Arsenic and Old Lace and the 1943 Phantom of the Opera) is the archival film program “The Mormon Church Explains it All to You,” a collection of shorts and film clips produced by the Church of Jesus Christ of Latter Day Saints and curated by film collector Dennis Nyback. Plays Saturday and Sunday night, October 20 and 21.