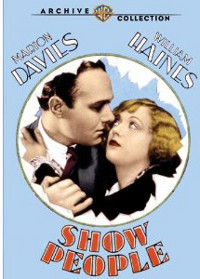 Show People (Warner Archive), from 1927, is one of the greatest of Hollywood silent movie self-portraits. It is a marvelous showcase for the talents of Marion Davies and in some ways it is the story of its star. Davies was a natural comedienne, full of warmth and sparkle and energy and sweetness, but William Randolph Hearst (her boyfriend) didn’t think comedy was dignified enough for his woman and wanted to build her up as a dramatic star.

In Show People, Davies plays Peggy Pepper, is naïve Southern girl trained in hoary stage melodrama and brought to Hollywood by a father who wants to make her a star. With her bright eyes and big smile and unassuming determination, Davies makes Peggy a delight, completely out of her element in the professional studio system but plucky enough to get over her humiliation and become a natural in the “low” comedy of slapstick while dreaming of the serious drama put out by the likes of High Art Studios, which indeed comes calling.

King Vidor rarely dipped his toes into comedy but this was his second film with Davies and he brings out the best in her and in the film, which spoofs the culture of Hollywood celebrity while celebrating the act of moviemaking. He slights neither aspect, and while his recreation of the slapstick film unit (a Keystone Kops-like team) is clearly a fiction, there is surely more authenticity to the moviemaking apparatus than we see in more contemporary films about filmmaking. And to fans of old Hollywood, the film also features some of the superstars of the era playing themselves in playful cameos, including Charles Chaplin (out of makeup), Douglas Fairbanks, William S. Hart, Mae Murray, Louella Parsons, Norma Talmadge, Lew Cody, Elinor Glyn, and King Vidor himself. He’s a better director than actor and he brings a light, deft touch to this bouncy comedy. The disc features an archival synchronized score with sound effects, and the mono soundtrack is low fidelity and in some sequences quite distorted. It preserves the original release version, but more audio work needs to be done.

Show People is one of the most famous of the Hollywood silent movie self-portraits. One far less well know but almost as accomplished and just as interesting is Souls For Sale (Warner Archive), a 1923 feature that was lost for years and rescued in the last decade.