Seattle screenings and cinema events are surveyed at Parallax View here, with a focus on SIFF 2012. 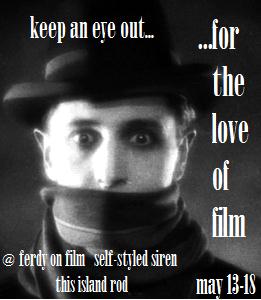 Whatever the financial tally when all’s said and done, the contributors to this year’s For the Love of Film blogathon have simply provided too many riches on too many topics to offer any meaningful list of highlights; any such won’t so much scratch the surface as gently buff it. So head over to the event’s three hosts—The Self-Styled Siren, Ferdy on Film, and This Island Rod—and sample the offerings for yourself.

The new Bright Lights journal devotes special focus to Anthony Mann, his career somewhat schematically broken up into low-budget noirs where he learned the craft (Robert E. Smith), westerns still underappreciated for their forcefulness and originality (Stephen Handzo), and late epics more complicated and subversive than they appear (Lee Westen Sabo on that “shambling, beautiful beast” The Fall of the Roman Empire). Another strong article in a dense issue is Christina Riley’s overview of the provocations—not least the casting of Dietrich—that run throughout Wilder’s A Foreign Affair.

“I would rather make the gravest of mistakes than surrender my own judgment.” A recent screening of The Last of the Mohicans was followed by a Michael Mann Q&A with Geoff Boucher. Kristopher Tapley has the highlights, but even he admits these outtakes can’t do justice to the wide-ranging, highly detailed thoughts you’d expect from Mann, so he’s fortunately appended the audio from the evening.

Translator Ted Fendt’s website Howling Wretches is barely a few months old yet already hosts two invaluable backstage reads, making their debut in English, from a 1984 issue of Cahiers du Cinéma. Alains Bergala and Philippon describe the shooting of Rohmer’s Full Moon in Paris, while Marc Chevrie’s visit to the set of Love on the Ground provides a fascinating look at the lengths to which Rivette will go to keep his films an unpredictable series of games. Via David Hudson.

“That Epstein’s films are uneven is part of their essential nature; he was genuinely experimenting, aiming not for a consistent level of craft or a seamless vehicle for narrative, but for moments that would kindle, images that would pierce.” The Chiseler’s Imogen Smith discusses, in prose nearly as vivid and transfixing as their imagery, three films by Jean Epstein.

In a similar vein, Ed Howard surveys the six “fascinating, poetic documentaries” that Maurice Pialat shot in Turkey in 1964, with topics ranging from studies of harbor life to the region’s religious history to the spectacle of a three-day wrestling match.

Kiyoshi Kurosawa’s earliest, least-known films are the subject of his interview with EG’s Mohamed Bouaouina and Anel Dragic.

“French women are not quiet…. They’re not submissive little bunnies. They have lives of their own. They don’t retreat into kitchens. And their men better not fuck around.” An engaging, rousingly uninhibited interview with Julie Delpy, courtesy of the Irish Times’s Tara Brady. Passed along by the Cinetrix.l

“He said, ‘We’re going up to Big Sur, we’re going to shoot up there.’ And we went up there. That’s where I met what’s-his-name, who makes the wine. Coppola.” The great Dick Miller (his recollections charmingly buttressed by his wife Lainie), interviewed for the A.V. Club by Caelum Vatnsdal, looks back at the barest fraction of the films he’s made. Which still makes for a wealth of anecdotes.

When it comes to celebrity handouts, Steve Martin’s legendary business cards have their first real competition via Tom Wilson, who preemptively answers fan questions about Back to the Future on a postcard (“Crispin Glover is unusual, but not as unusual as he sometimes presents himself.”).

“Do you know what time it is?” “A watch doesn’t really go with this outfit, daddy.” Josie Sampson revisits Clueless, and praises the deliberately tacky, “tasteless attempts at sophistication” of its costume design, a vibrant marker of childish things to be put away.

The Movie Morlocks’s morlockjeff’s two-part runthrough of the lesser-known, offbeat, and sometimes outright embarrassing byways of Mickey Rooney’s career becomes, when you remember that unique sprite’s indefatigable energy, a litany of perseverance both pathetic and oddly heroic, Rooney pressing on full bore whether aiding a talking duck, forcing a captive to play out Cyrano de Bergerac, or crawling about in a diaper and breast-feeding from Marianne Sagebrecht.

Also at the Morlocks, Kimberly Lindbergs offers some of her favorite photographs chronicling the Cannes festival, from Louis Lumière meeting in a train station with the town’s mayor to a lovely 1959 image of Cary Grant and Kim Novak lost in one another’s eyes. Another post, covering the ’60s, is to follow.

Even before seeing the colorfully desolate images, hanging midway between cinematic studies and tourist snapshots, of Wim Wenders’s latest photo exhibit, the title ‘Places, strange and quiet’ would probably give you a hint as to their maker. The Deichtor Hallen Hamburg offers a slideshow (click “Dia Show” at bottom right on the banner); a few more are viewable at Wenders’s own website. Spotted by Criterion.