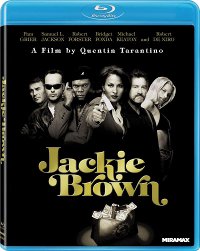 Robert Forster’s face is a mixture of been-around-the block and introspective peace. He doesn’t carry as much referential weight as Grier but makes a terrific counterpart. Where Grier’s energy and charisma define the resourceful Jackie, Forster has aged into a quiet gentleness, his chiseled face projecting an inner calm. Together they’re quite a pair, icons of the seventies as survivors in the nineties.

Dropping them into a caper film with a funky beat, Tarantino creates genre soup. Meticulous attention to detail, tongue-in-cheek establishing cards, a recurring time clock, even a (gratuitous) split screen recalls such caper classics as The Killing, The Thomas Crown Affair, and Twilight’s Last Gleaming. The Motown dominated soundtrack includes the theme songs to Across 110th St. and The Big Doll House (“Long Time Woman” sung by Pam Grier herself!) and highlights from the score to Jack Hill’s Coffy. Dirty Mary, Crazy Larry and Detroit 9000 play on TV, and Sam Jackson’s gun-dealing character references John Woo’s The Killer.

It’s more than a game of “name that reference,” though. His gift is in putting a spin on familiar conventions and surprising the audience by riffing on and defying expectations. The real pleasure of Tarantino’s references is that you don’t need to know the film to get the reference as long as you know the genre. In this age of video store collections and seventies chic, everyone can play! Jackie Brown works fine without a frame of reference, but for those already a part of his world the mixing and matching of genre conventions adds just another level of self reflexive fun.

But Leonard’s story doesn’t leave Tarantino much room to maneuver, and suddenly Tarantino’s easy pace becomes a weakness. His generous attention to detail and love of “how things work” spins the film out to two and a half hours, but without the ping-ping bounce of conversations or playful construction of his earlier films. Tarantino seems to be caught between making a character piece and a crime film, trying to split the difference.

So Jackie Brown isn’t quite his best film, but it should be, with its grown up, lived-in characters. It’s still his most mature to date.

Jackie Brown debuts on Blu-ray this week, along with Pulp Fiction, from Lionsgate.