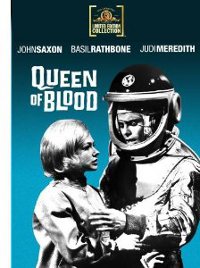 The actors are generally wooden even without the massive space helmets (reportedly the most expensive prop in the production, built to match the Soviet suits) restricting their performances, but then Harrington is going more for mood than drama. He creates a sense of strangeness to the American spaceships and bases by going for a minimalist aesthetic and sculpting the lighting to evoke a gothic horror. The alien attacks are not action scenes but otherworldly horror and Harrington gives them an eerie, suspenseful quality, and his climactic twist, while not exactly jaw-dropping, is clever in its own right and anticipates some of the key elements of Alien.

The MGM Limited Edition Collection disc is mastered for a nice 35mm print with vivid color and good clarity and only brief passages of minor wear, and presented in its correct anamorphic widescreen aspect ratio. 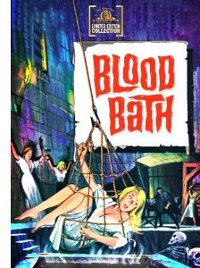 Blood Bath (aka Track of the Vampire) (1966) was a product of a similar form of recycling, in this case a Yugoslavian thriller about (of all things) art theft that Corman handed to Jack Hill, who had been faithfully jumping in to offer second-unit footage and, when necessary, “finish” troubled films (such as Dementia 13). He matched the shadowy footage of cobblestone streets and old world alleys and buildings of Belgrade with a drama set in the world of Beat poets and tortured artists in the coffee house culture of Venice, CA in the mid-sixties. His film plays like a serious version of Corman’s cult black comedy Bucket of Blood, with William Campbell as the tormented creator whose paintings meld art and murder. A cast of beauties becomes victims and terrorized targets, including Lori Saunders (often seen in a bikini), Marissa Mathes (whose nude modeling is carefully concealed by targeted angles) and Sandra Knight. The victims are dropped into a vat of wax (a la House of Wax) in an underground dungeon right out of Corman’s Poe films, which somehow found its way to California.

The vampire is courtesy of Stephanie Rothman, who shares directing and writing credit with Jack Hill, even though they essentially worked at cross purposes. Corman, dissatisfied with Hill’s version, handed the production over to Rothman, who rewrote the film to turn the artist into a vampire (played by an actor without the slightest resemblance to Campbell) and shot new footage to shoehorn this bizarre twist into the existing story. Rothman’s vampire is a hammy creation that doesn’t charm or terrify anyone, least of all the viewer. Hill’s location footage, however, is really quite handsome, giving a gothic atmosphere to Venice after dark. He has a great time with the coffee house beat culture, where Hill favorite Sid Haig (as Abdul the Arab) struggles to fit into the hipster group of insiders, and turns a flashback (featuring Corman himself as a long-dead painter) into a psychedelic nightmare. And watch for an inspired lift from Hitchcock’s Strangers on a Train, where he shoots a carousel horse as if a demon charging the camera. The scars of the production history are readily apparent in the film’s detours into incoherence, but Hill’s scenes are interesting enough to wish that his version of the film still existed. Until then, this is what we have.

Blood Bath has been available in numerous public domain editions, most taken from TV prints of varying degrees of wear and tear. This edition, taken from a well-preserved 35mm print, is a significant improvement over every previous edition, and it is presented in its proper widescreen format.

Available by order only from the MGM Limited Collection, from Amazon, Screen Archives Entertainment, Classic Movies Now and other web retailers.

MOD stands for “Manufacture on Demand” and represents a recent development in the DVD market, where slipping sales have slowed the release of classic, special interest and catalogue releases. These are DVD-R releases, no-frills discs from studio masters, ordered online and “burned” individually with every order. You can read a general introduction to the format and the model on my profile of the Warner Archive Collection on Parallax View here.