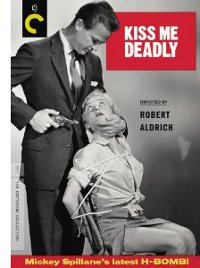 Criterion gives the film, previously available on an indifferent DVD from MGM, the special edition treatment on the beautifully remastered DVD and Blu-ray releases. 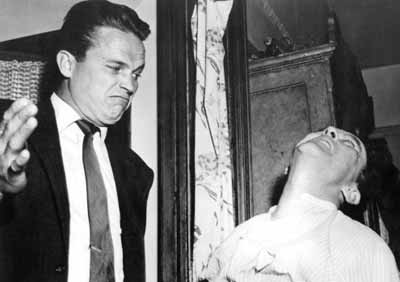 It features detailed, in-depth commentary by film noir historians Alain Silver and James Ursini, a video tribute by director Alex Cox, excerpts from documentaries on screenwriter A.I. Bezzerides and author Mickey Spillane, a video tour of the film’s locations then and now, the altered ending that was seen for years before the 1998 restoration and a booklet with a new essay by J. Hoberman and an archival article written by Robert Aldrich for the New York Herald-Tribune, defending the film during the controversy over its violence. (You can read J. Hoberman’s essay from the booklet at Criterion Current here.)

And if that’s not enough reason, the inspired art direction, recalling not just a lurid “True Detective” cover but the entire pulp magazine through the pages of the booklet, is icing on the radioactive cake.