Margot Benacerraf’s 1959 documentary of the hardscrabble lives on the peninsula of Araya, a barren desert surround by ocean and salt marshes on the northern reaches of Caribbean Venezuela, is non-fiction filmmaking as poetic realist portrait. 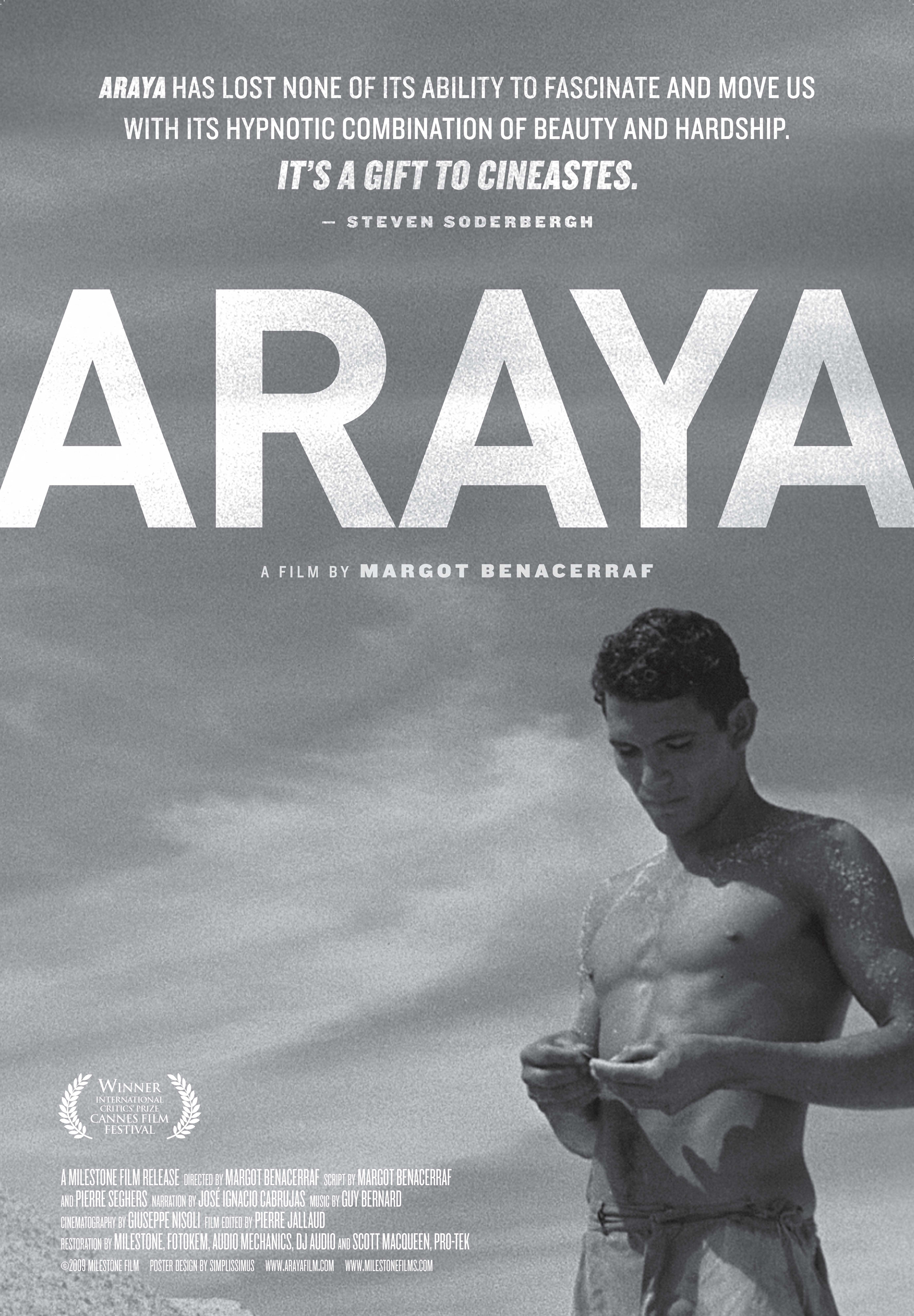 This land, and its unique salt marshes, was discovered and settled by the Spanish in 1500, when salt was as valuable as gold, and abandoned less than a century later, its stone fort left to crumble in the sun and wind and salt air, an unforgiving climate that has rendered the island an inhospitable desert. Yet the “daily ritual of salt” continues unchanged through the centuries, carried on by the ancestors of the workers who remained behind (“450 years have passed between its discovery and this breaking dawn”), and Benacerraf profiles the lives of the residents through those rituals as performed by three families from three different villages: the “salineros” cutting, harvesting and hauling the salt into enormous pyramids ready for export, others hauling sustenance from the sea in massive nets and selling surplus in nearby villages and salting the rest. For, as the lyrical narration reminds us like a chorus, “On this land, nothing grows. All comes from the sea.” There is no electricity (and thus no refrigeration) or plumbing, drinking water is trucked in and every resident big enough to haul a basket or pick out the catch from a fishing net is put to work. It is a hard, unforgiving life of grueling, monotonous work, set against a hard beauty of a barren land and a soundtrack of music created by the inhabitants.

Araya is a tone poem, a poetic portrait of an ancient existence in the modern world, with narration (scripted with Pierre Seghers) to match, a kind of blank verse that continually circles a few vivid and evocative motifs. Margot Benacerraf never meant it to be a documentary in the strictest sense. “I decided that I wanted to tell this story, but not as documentary in the contemporaneous sense of the word,” she explained in an interview years later. “I wanted to employ a more poetic mode, a narrative shaped by scripted rather than spontaneous action, a fictionalized documentary if you will, the flip side of the Italian neo-realist style which had enjoyed such prominence during the decade.”

In the tradition of Robert Flaherty, she captures the rhythms and rituals of their life as if a dramatic narrative, in beautifully composed images and austere compositions. She makes a point of bringing the wind- and sun-beaten faces of the inhabitants into her lens as she presents the details of their physical labors, unaided by any 20th century technology, with startling clarity. It’s an immersive experience, watching this lifestyle condensed into a single 24 hour cycle, a “day in the life” of an unending routine that simply staggers through shifts day and night. And it ends on the sudden transformation when the modern industrial world arrives in 1959, a startling coda that remakes their lives overnight in a mechanical rumble of trucks and cranes and motor boats on the lagoon.

Araya has been embraced as a tribute to an ancient way of life but Benacerraf—for all the stunning beauty of her images—never romanticizes the hard lives of these people. The mess of machinery, with its belching smoke and cacophony of rumbling engines and screeching metal, is a blight on the searing beauty of the barren landscapes and cloudless skies, to be sure, but the film is more nuanced than to simply dismiss this change as something destructive to the simple lives of the population. The old life was backbreaking, exhausting, numbing; working the lagoon and hauling salt into the massive pyramids to dry and await shipping (trade was their lifeline for anything that didn’t come from the sea, from clothes to fruit and vegetables) took a terrible physical toll on the bodies through sores and skin ulcers and flesh burned raw. This new industrial reality hits like an explosion, upending the old rituals overnight, but with it comes the possibility of easing the lives of these isolated peasants living day to day, working night and day. While there is nobility to the people, it has to do with their fortitude, not any commitment to preserving an ancient way of life.

The film won awards at the Cannes Film Festival and was celebrated in festivals around the world in 1959, yet it all but disappeared soon after but for sporadic revivals and releases (it didn’t even premiere in Venezuela until 1977), even after Araya was (in 1990) chosen as one of the five best films in the history of Latin America. Araya is the only feature from Benacerraf, who is revered as a national treasure in Venezuela, for her dedication to exploring national culture in her films and preserving and nurturing cinema in Venezuela in the years since 1959. The film was finally restored and revived by Milestone in 2009, and it has its revival premiere at the Berlin Film Festival.

The DVD is gorgeous—Milestone did a superb job in overseeing the film restoration and the digital mastering for DVD—and it features interviews with and archival documentaries about the acclaimed director Margot Benacerraf plus her only other film, the 1951 short documentary Reverón, on the Venezuelan artist Armando Reverón. The black and white film is in Spanish with English subtitles and features alternate French language narration.