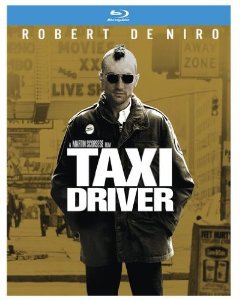 Martin Scorsese’ incendiary masterpiece of alienation and anger and urban anxiety may be the most maverick vision in all of seventies American cinema. It is certainly one of the most courageous and passionate portraits of the American underbelly ever put on film, a movie bathed in blood as much as in light, and revisiting the film on its Blu-ray debut, mastered from the brand new digital restoration currently making the rounds on the festival and repertory cinema circuit, only confirms the power of the film to, after all these years, sink the audience into the mind and filthy, fetid world of Travis Bickle.

Directed by the ambitious young Scorsese, who confesses that he was driven to make this silent scream turned psychotic explosion of a script by Paul Schrader, and starring Robert DeNiro as Travis Bickle, it is a primal portrait and uncompromising vision carved out of the New York night, the summer heat and the garbage of the Times Square cesspool. Bickle, a character inspired by would-be assassin Arthur Bremer and Jean-Paul Sartre’s novel “La Naussee” as well as Schrader’s own spiral into self-obsessed urban loneliness, is no hero. The restless, insomniac Vietnam veteran who takes a job driving a taxi on the night shift and muses over the urban cesspool that he wanders through in his nocturnal prowlings in a hateful gutter poetry has convinced himself that he’s “God’s lonely man,” the self-appointed avenging angel out to clean up the garbage on the streets.

DeNiro reads his journal entries in a near monotone voice-over, a matter-of-fact racism and homophobia and contempt for wide swathes of the human race creeping into his unexamined musings. His unacknowledged racism and intolerance (seen in his reflexive expression of contempt every time he catches sight of an African American on the street) becomes his excuse to unleash his anger in a violent spree under the guise of heroism and vigilante justice. And film’s final, sour irony is that the world believes his delusions of chivalry as much as he does.

Scorsese and cinematographer Michael Chapman create an almost hellish vision of New York at night as seen through the eyes of Bickle. Steam rises out of the grates and manhole covers like some primordial urban swamp (some of the street scenes were shot at slightly higher speeds, giving the steam an eerie, unreal slowness when played back) and there’s a lurid, abrupt quality to the violence, like a Weegee photo in the brutal glare of red police light, blunt and grotesque and explosive. The new restoration doesn’t “clean up” the image so much as sharpen the texture of the portrait. It’s so visceral it you can feel the heat and grime waft off the screen.

Kim Morgan revisited the film when the new restoration premiered in Berlin (“after many viewings throughout my life, the movie, all red light and red blood and red anger, is still lingering in my mind”) in a superb post on the MSN Hitlist blog, which also offers details on the restoration itself, supervised by the film’s cinematographer Michael Chapman.

The Blu-ray debut features all the supplements of the previous DVD “Limited Collector’s Edition” and more. That includes separate commentary tracks by professor and writer Robert Kolker and screenwriter Paul  Schrader, 15-minute “Martin Scorsese on Taxi Driver” (talking about his influences and his reflections on the work decades later) and the 21-minute “God’s Lonely Man” (reflections by screenwriter Schrader and critic Kolker), along with storyboard-to-film comparisons (with an introduction by Scorsese) and shorter companion featurettes from the 2007 edition, and the superb 70-minute documentary “Making Taxi Driver” from the 1999 DVD release.

New to this edition is the interactive Blu-ray exclusive “Script to Screen” function, which scrolls actual script pages (with Scorsese’s notations) along with the film, and the movieIQ function which synchs up the film with computer or iPhone (through wireless-enabled players) to run supplementary material. The archival revival of this edition is the original 1986 commentary by Martin Scorsese and Paul Schrader (recorded separately) for the (long out of print) Criterion laserdisc release. This is one of the very first commentary tracks ever recorded and has been unavailable to most viewers for years (there aren’t a lot of laserdisc players still spinning discs out there). The unfamiliarity with the concept is apparent in the long silences of the track, even with the two separate tracks edited together and a narrator offering periodic introductions and background notes, and much of their talk has been reiterated in later interviews, commentary tracks and documentaries, but it is still illuminating and historically important: a track recorded ten years out from the film, before Scorsese had become a significant commercial success or a spokesman for film history and preservation.