“I don’t interpret. I don’t transmit any message. I avoid expressing theories and forcing meanings. I reconstruct documents, I offer information which leaves to the spectator the entire responsibility for his own judgments.” 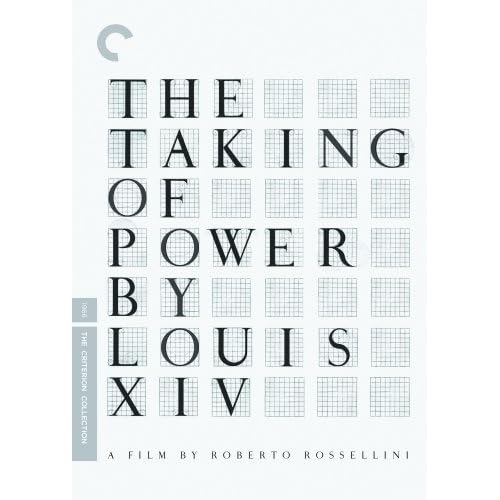 This week, Criterion resurrects key productions from Roberto Rossellini’s cycle of historical films directed for television in the final act of his career. Largely overlooked in light of his legendary neorealist dramas and his more intimate dramas starring his lover Ingrid Bergman, these films are could technically be considered historical dramas, but they are nothing like the spectacles that you usually find under this genre.

Criterion releases four of these productions. Blaise Pascal, The Age of the Medici and Cartesius, all from the seventies, are collected in Rossellini’s History Films Trilogy â€“Renaissance and Enlightenment, a box set under the Eclipse imprint, Criterion’s budget-minded offshoot. (My copy arrived too late to review for this piece.) The 1966 The Taking Of Power By Louis XIV, Rossellini’s first film in this cycle, comes out as a Criterion proper release, with supplements and a booklet. Part history lesson and part political treatise, it is a strange and fascinating film with exacting attention to sets and dress and realities of the period. In the view of many critics and Rossellini scholars, it is the greatest of his history films and one the director’s masterpieces

The film opens on the deathbed of Cardinal Mazarin, the Chief Minister of France who has amassed a fortune in his position. The ambitious and corrupt Fouquet is jockeying to take his place (and enrich himself in the process) and the entire court is full of intrigue and plotting at the Cardinal’s illness, all figuring how to make their power play. Or so we’re told, as this information is all exposition, a dialogue serving largely to explain and explicate everything to the audience. (Rossellini also takes time to explore in detail the state of medical science: doctors passing judgment on the odor and color of the Cardinal’s urine, and prescribing more bleeding. Isn’t it lucky that they’ve measured just how much blood a man can lose and still remain alive?)

The young Louis XIV decides not to replace the Chief Minister and his country ruled for him. He hatches a plan to take back his power and rule himself. (His mother scoffs: “Have you ever seen a king of France govern?”) The plan is ingenious: he constructs a new, artificial court at Versailles, far from the heart of the government in Paris, and contrives a whole new set royal conventions and social codes to stand in for ascendancy within the court. He draws the nobility out of Paris and distracts them with pomp and ritual and expensive fashions that they struggle to keep up with. The film doesn’t just deconstruct and analyze this social architecture, it shows Louis building it from scratch and slowly, methodically implementing it while explaining its workings to key members of his staff.

When the final act of the film arrives, we see it in action: the court gathers to watch the king at all turns, making simple activities (such as the king eating dinner, all fourteen courses or so) into a formal spectacle, where attendance is a privilege. In the middle of dinner, he calls to a nobleman and invites him to join him after dinner to feed his dogs. They crowd notes the honor silently, but the sign of favor is unmistakably registered. A seemingly tossed off but remarkably calculated remark about a newcomer’s provincial doublet reverberates through the room as a caution against such improper attire for the court. Louis has turned meaningless gestures into the coin of the realm, as far as the nobility is concerned, and he plays his part in it.

“History, through teaching visually, can evolve on its own ground rather than evaporate into dates and names. Abandoning the usual litany of battles, it can surrender to its social, economic and political determinants. It can build, not on fantasy, but on historical knowledge, situations, costumes, atmospheres, and men who had historical significance and helped the social developments by which we live today.”

Rossellini directs less like a drama than a pageant, with a largely non-professional cast arranged like figures in a painting from the era, right down to the formal poses and the full-shot framing. The sets, the props, the costumes are splendid and lavish but never distracting â€“ they are part of his recreation of the world. The unemotional readings and unflustered reactions of his star, a non-actor named Jean-Marie Patte, is transformed by Rossellini into a confidence and a calculation behind the pageantry. It’s remarkably effective once he inhabits the center of the Versailles court, walking through the role without betraying an emotion, all part of the act. The dialogue serves not as revelations of character and motivation but as explanation and exposition, a series of history lessons that are startlingly clear and direct.

What’s less obvious is Rossellini’s ambivalence about Louis’ ploy. As the title suggests, this is not a celebration of triumph but a remark on a kind of conquest, or perhaps even a theft: the taking of power. The peasants, only seen briefly, are concerned with royalty and rule only so far as it creates national stability and economic strength. They’re just trying to survive and Louis’ new paradigm actually serves them better, even if it reestablishes monarchical power and divine right. But it’s a tool no better than the man who wields it. Louis XIV is clear thinking and driven to build a strong country. In a couple of generations, it will fail under Louis XVI, neither as brilliant nor as dedicated to the ideals of good governance. But one thing is clear: there is nothing divine here about the right of kings and the succession of monarchy. It’s all about power and control and even appearances, which in the hands of Louis are transformed into something more powerful than wealth.

Colin MacCabe’s essay from the DVD booklet, on the Criterion website.