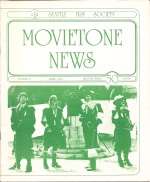 Can anyone seriously attempt to deny that the Marx Brothers are in control of the United States today? Transparent shysters and incompetents fill high government offices. A naked student lopes through a med school amphitheatre. The Seattle Opera stages Siegfried. And until recently, at least, gas station operators turned on their beacons, blocked their entranceways, put out signs that they had no gasoline, and sold that gasoline to red, white, and puce automobiles with odd-numbered or fractional license plates between the hours of 6:53 and 7:0l a.m., with time out to parlay with Arabian sweet-gum merchants. That honking behind you isn’t the next car in line; it’s Harpo trying to tell you he can’t get your trunk open with his can opener. 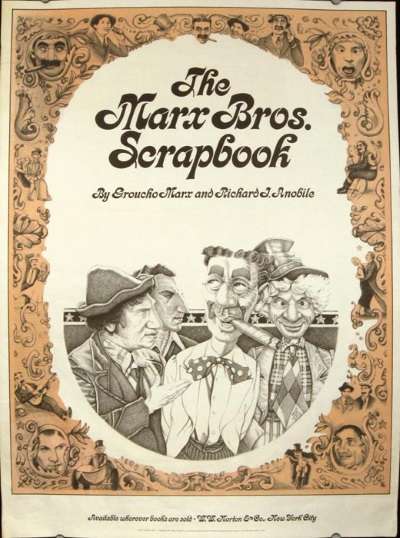 The Marx Bros. Scrapbook achieved a pronounced notoriety late last year when Groucho Marx made it known he was seeking an injunction to prevent its publication. According to Mr. Flywheel, he never dreamed that Richard Anobile, compiler of such previous (and posthumous) collections of pithy sayings as W.C. Fields’ Drat!, would transcribe their private conversations unedited, so that all the world could be treated to Groucho giving voice to all the things he was sublimating in Cocoanuts, Animal Crackers, Monkey Business. etc., not to mention calling Nixon “a dirty crook” and Eisenhower “a schmuck.” He didn’t get the injunction and copies of the Scrapbook now proudly wear a gold seal promising “unexpurgated Groucho.”

Unexpurgated Groucho, sadly, quickly proves wearisome. Someone close to the Brothers once remarked that, even though they knew the boys’ stage and screen dialogue was largely written by other people, they couldn’t shake the feeling that everyone was speaking his own lines. In addition to the runaway improvisation that often marked their stage work, Groucho used to collaborate closely with Kalmar and Ruby, Perelman and Johnstone, whoever was hired to do the writing at that moment in comedic history; but little of the material he “writes” for himself here is very scintillating. Although Anobile and Susan (Mrs. Harpo) Marx both stress his continuing need to be “on,” at times Groucho wants no part of Anobile’s interviewing and flatly refuses to encourage many lines of questioning, sometimes—apparently—because he simply doesn’t remember that time or that person or that subject well enough. He—and many of the other interviewees, who include Harry Ruby, Arthur Sheekman, Jack Benny, Zeppo and Gummo Marx, Robert Florey, Morrie Ryskind, and more—tend to repeat themselves in not very interesting words (really, expurgating aside, some basic editing wouldn’t have been amiss). The cumulative impression left by the Scrapbook is one of great sadness—the sadness of a man whose life, in all ways most meaningful to him, is over, and whose talent has largely deteriorated to remembering which actresses he’d like to have fucked and recounting how many times he had to get up and piss the night before 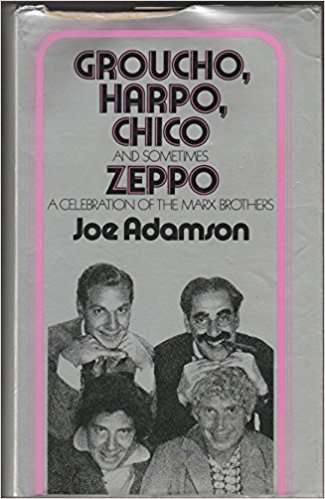 No notoriety has attached itself to Groucho, Harpo, Chico and Sometimes Zeppo; in fact I haven’t heard anyone mention the book. But if The Marx Bros. Scrapbook is an ultimately depressing experience, Joe Adamson’s response to the zanies’ personalities, styles, and careers is exhilarating. It deals with the classic (if hardly classical) Marx Brothers humor that is still very much alive, and in addition to cataloguing and carrying over that humor as well as it can be captured on the printed page, the book is funny as hell in its own right. And besides being funny, it’s perceptive and instructive and dazzlingly personal. Rarity among film volumes, it is a written book that honors its subjects in the most integral way possible, not only evoking but coming near to embodying what the Marx Brothers and their movies are all about.

Adamson goes out of his way occasionally to insist that he is not a film critic. Either he’s a genial liar or he’s got himself fooled. Not that he ever puts on a Huxley College mortarboard and starts diagramming theories of comedy, or quotes Andrew Sarris except to get a laugh. But Groucho, Harpo et al., in addition to offering a thoroughly readable and risible account of the conception, generation, and unpredictable metamorphosis of each Marxian stage show and film, conveys the subtle differences that evolve from film to film as films, so that, without Adamson’s getting windily explicit about it, we emerge from the appropriate chapters just knowing what differentiates Monkey Business and, Horsefeathers besides an ocean liner and a football team. And that is appreciative writing of the highest order.

Indeed, if the Brothers were still around and up to it, they could do no better than to look up Adamson to do their next script. When President Firefly of Freedonia (Duck Soup) offers Chicolini a Cabinet position, Adamson observes: “There are vending machines who choose quarters with more care than Groucho fills government posts.” Marxian logic finds its way into his commentary: “Later, Groucho lounges in bed eating soda crackers, a great mockery of the Idle Rich image. (And the bed was just made up, too. It wasn’t a real bed; it was just made up.)” And what happens when he describes an abortive Marx Brothers flick written by Salvalor Dalí (featuring, among other things, a scene with Groucho as “the Shiva of Big Business” answering ten telephones with six hands)? “The script was of no visible good … It had no plot, no logic, no consistency, none of the conventional elements that are unnecessary to Marx Brothers movies. It was absurdity but it wasn’t comedy, and, like Dalí’s script for Un Chien Andalou, nothing in it held true long enough to be ridiculed. Harpo was very pleased with the whole affair, got a big kick out of Dalí and all the arms, and struck up a lasting friendship that lasted until Dalí went home. When Harpo died, he left the script to his beautiful wife, Susan, who, to this day, has lost it.”

Although it lacks the rawer episodes (Chico enjoying a blowjob in Pittsburgh while talking longdistance with his wife, par exemple), G, H, C, & Sometimes Z has it all over The Marx Bros. Scrapbook for anecdotes. These are delightful, and so are the quotations from and imaginative descriptions of Marx Brothers scenes that were contemplated but never shot, especially in the vaudeville-tested MGM pictures. But the book’s greatest strength is as criticism. If he heard me say so, Adamson would undoubtedly reach into his raincoat and take out some pruning shears and cut off the tie I’m not wearing, but his (dare I say it) analysis of the mirror scene in Duck Soup reflects such consummate comprehension of the greatness of that scene that it brought a lump to at least one reader’s throat. To cure such a lump, Adamson’d probably reach into the coat again and produce a plunger.