I bring my VIFF 2010 Dragons and Tigers coverage to a close with short takes on a few films. One of Vancouver’s great services is to bring attention to young filmmakers and interesting films before they have been “discovered” by the film festival establishment at large, those major festival that put the stamp of acceptance on the films that will be the subject of discussion in critical circles for the next year. The Dragons and Tigers selection is filled with World Premieres, International Premieres and North American Premieres. Not that all of them are great or even good (I have yet to find anyone besides programmer Shelly Kraicer who found anything of interest in Crossing the Mountain from China, a film that feels more like a structuralist graduate student assignment than a movie) but exposure to ideas and images and narrative concerns is still a worthy goal of festival attendance. And it sure beats seeing yet another derivative shot-on-DV American indie repeating the same clichÃ©s that have become codified in the last couple of decades.

END_OF_DOCUMENT_TOKEN_TO_BE_REPLACED

The buzz of dragonflies, thousands of them racing through Tangshan with the speed of a roaring railroad engine, fills the opening moments of Feng Xiaogang’s Aftershock, his epic story of the two devastating earthquakes that assaulted China in the past generation. Based on a real-life historical detail of the 1976 earthquake, the unsettling swarm manages to both pay tribute to the mythology of the event known to local Chinese audiences and create the ominous apprehension of something literally earthshaking to come for audiences unfamiliar with the history.

Currently the most popular domestic blockbuster in Chinese history and China’s entry for the 2011 Academy Awards, the 2010 drama is a crowd pleaser to be sure, but a respectful one. Based on a novel by Zhang Ling, Aftershock is no attempt at documentary or docudramaâ€”melodrama abounds in the fictional story of a family literally torn apart by the devastation of the earthquake and the “Sophie’s Choice” faced by a suddenly widowed mother now forced to choose which of her two children will live in a rescue attempt that will sacrifice the otherâ€”but neither is it a disaster movie, at least by conventional definitions of the genre. The spectacle of destruction is reserved for the first quake, which hits in the hush of pre-dawn dusk, and the special effects used to illustrate the level of damage it wreaked on the classic Soviet-style architecture of massive brick buildings. Cameras trace the rips through monolithic walls and watch as structures tear in half, massive walls of brick and concrete falling in on themselves or tipping into the streets where citizens attempt to flee. Without commentary or criticism, Feng shows us just how and why this quake took so many lives (an estimated 240,000 in a city of around 1 million).

END_OF_DOCUMENT_TOKEN_TO_BE_REPLACED

The 29th Vancouver International Film Festival ended Friday, October val 15 with a screening of Sylvain Chomet’s the Illusionist. Parallax View will continue running notes on a few of the featured films over the next week or two, but for now, here is the festival’s official press release:

END_OF_DOCUMENT_TOKEN_TO_BE_REPLACED

Lee Chang-dong won the Dragons and Tigers Award at VIFF 1997 for his debut feature, Green Fish. He has since won awards in major festivals the world over for Oasis (2002) and Secret Sunshine (2007), one of the most talked about films at Cannes and Toronto (and still without an American releases), and his new film, Poetry, arrives from Cannes with a well-deserved award for Best Screenplay.

So why isn’t Lee considered in the same company as Hong Sang-soo or Bong Joon-ho or Park Chan-wook? When I pitched the question to Daniel Kasman (film critic at Mubi) as we hoofed it to a VIFF screening, he confessed that he doesn’t see any real visual sensibility to the director, no directorial design to the cinema. I grudgingly concede his point. Lee is a superb screenwriter and a magnificent director of actors (Jeon Do-yeon was awarded Best Actress at Cannes for the amazing portrait of rage and betrayal of her intense performance in Secret Sunshine) and both of those skills are at the forefront of Poetry, an enthralling drama of an aging woman whose compassion is tested when she learns that her teenage grandson is guilty (with five of his friends) of raping a classmate, a “plain” schoolgirl who killed herself.

END_OF_DOCUMENT_TOKEN_TO_BE_REPLACED

“This is based on a true story,” reads the opening credits. Well, they don’t so much announce as scream for attention, hacked into the screen like graffiti and punctuated with drum beats. Is it a warning? A dare? A pretense (a al Fargo)? And does is matter?

While it does make me curious to discover the reality behind the story (apparently something to do with a dog breeder more ferocious than his canines), it doesn’t really change my perspective on this seriously tweaked serial killer thriller with elements of farce, black comedy and social satire. While accurate, that description doesn’t really prepare you for this strange trip, which has a whiplash quality and yet is queasily measured and methodical, stretching out for almost 2 ½ hours that should be far too long yet somehow isn’t. The perspective is neither killer nor victim, but a meek bystander—the classic passive salaryman type—pulled into the gruesome games of death as audience, accessory and stooge, and perhaps in some twisted way a potential protégé for the veteran killer.

END_OF_DOCUMENT_TOKEN_TO_BE_REPLACED

The rumors are true: Miike Takashi’s 13 Assassins, a kind of outlaw The Seven Samurai by way of The Dirty Dozen set at the sunset of the Shogunate and the samurai era, is a startlingly traditional samurai action piece that shows that Miike can indeed color between the lines. Which makes me wonder if that was indeed his project. With the exception of one signature Miike image (a woman who has been cruelly disfigured by our royal villain, writhing naked on the screen like some science experiment gone displayed as a piece of evidence), this is a straightforward piece, a men on a mission film where the increasingly outmoded ideals of duty and honor and meaning through sacrifice are at the heart of the matter. As a matter of face, the Shogun’s advisor can’t challenge the depraved Lord Naritsugo (Inagaki Goro), a monster that makes Caligula look restrained who just happens to be the Shogun’s half brother, without bringing disgrace upon his master, so he calls upon the honorable samurai retired Shinzaemon (Kurosawa Kiyoshi regular Yakusho Koji) to assassinate Naritsugo before he is promoted to the cabinet. A surgical strike, one might call it, all in the name of preserving the country and the honor of the Shogunate.

END_OF_DOCUMENT_TOKEN_TO_BE_REPLACED

This slick South Korean underworld thriller is not a transcendent action film in any way, but in the realm of humorless South Korean action conventions it’s well constructed, suitably dark and dangerous and filled with well-honed, visceral scenes. And it didn’t hurt to see the film in a theater packed with a target audience you rarely share the experience with. I don’t mean American male action fans, but young South Korean women with an affection for its matinee idol start, Won Bin (most recently, he played the son in Bong Joon-ho’s Mother). The ooohs emanated from all parts of the theater (but especially the front rows) when Won makes his entrance, playing an emotionally distant pawn shop proprietor behind a lock of hair artfully falling over his right eye. Then again when we get the first flashback of Won, heretofore nameless, as the highly-trained government agent Cha Tae-chik, a super-spy with mad skills and a military haircut. And, of course, when we get our first shirtless scene of the dreamy, tortured hero, when he’s pulled back into the world he fled years before to save a little girl from the heartless criminals who add to the drug-dealing coffers with a sideline in black market organs and child slavery.

END_OF_DOCUMENT_TOKEN_TO_BE_REPLACED 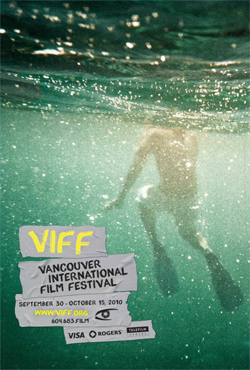 The Vancouver International Film Festival is not counted among the major festivals of the world. Coming after Venice and Toronto, overlapping with New York and Pusan, and running fifteen full days of screenings, it doesn’t arrive with high profile premieres or attract the kind of celebrities that impresses the paparazzi. It focuses on bringing in not the international press but the local audiences, the “local” designation extending all the way down to my neck of the woods. Only three hours from Seattle by car (a little longer by train), it’s an easy festival for me to attend, either in day trips or longer stays with a few nights at a downtown hotel, and it’s an attractive festival: well organized, packed with screenings, full of variety yet marked by special sections.

Centered in the lively downtown area, where the streets are alive and buzzing long after midnight on the weekends, it presents films in ten theaters daily, nine of them within a few block radius. The tenth, the newly added Park Theatre (replacing the longtime festival venue The Ridge), is a few miles out but easily accessible by the Canada line, the subway that jets from downtown to the airport, and quite convenient. Seattle is my hometown festival, but Vancouver is my home away from home festival, a pure pleasure to attend every year, whether for a weekend or a week.

VIFF 2010 kicked off on Thursday, September 30 with a full day of screenings crowned with the opening night gala Barney’s Version, and ends Friday, October 15 with an abbreviated screening schedule capped by the closing night gala presentation of Sylvain Chomet’s The Illusionist. In between, over 220 features and around 150 shorts from 80 coountries are publically screened.