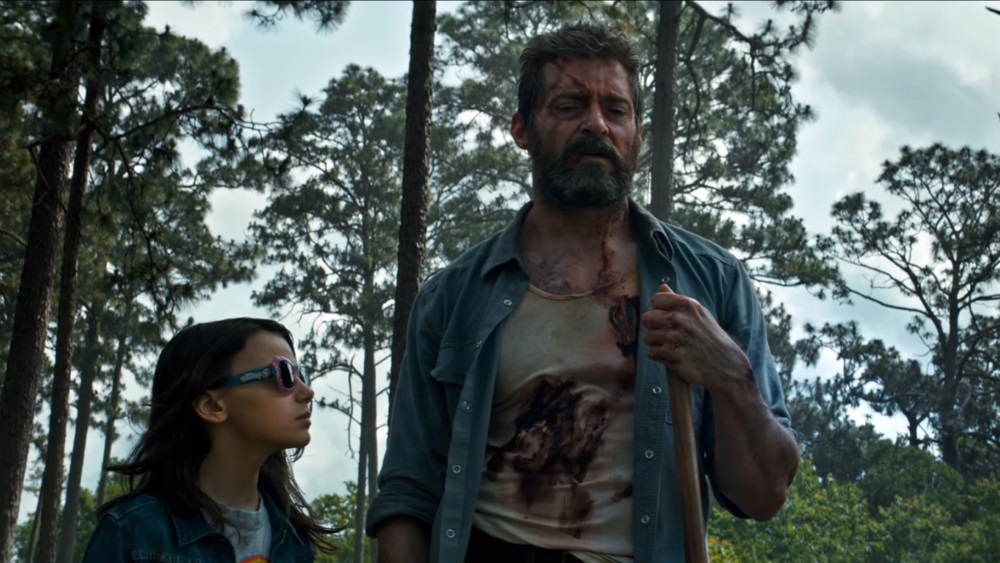 Can a comic book superhero movie tell a human story? Logan (2017) makes the case that the genre is not limited to spectacle (though this film does offer some accomplished—and violent—action scenes), end of the world stakes, or world-building chapters in a massive franchise.

Set in the near future of 2029, which is a lot like today but a little more automated and a little more depressed, a world worn out and run down with a population to match, it presents Logan (Hugh Jackman), the former X-man also known as Wolverine, in hiding. He works as a chauffeur for hire under the radar while looking after an ailing Xavier (Patrick Stewart in a fearlessly vulnerable performance). Once immortal, thanks to healing powers that have kept him young for years, Logan is now breaking down and wearing out, his body ravaged by disease he can no longer combat, while Xavier is slipping into dementia and losing control of his once-finely focused mind. A dangerous thing for a telepath of his power, even more dangerous in a culture where mutantkind has been hunted to near extinction. And while Logan saves money for an escape from their Mexican compound, a kind of fantasy involving a boat and a life on the high seas, the government is on the hunt for them and for a silent young girl, Laura (Dafne Keen), who is a pint-sized Wolverine in her own right. It’s no spoiler to say that Logan, nudged by crotchety old man Xavier, becomes a reluctant protector to the girl who, at least on a genetic level, could be his daughter.

Listen, if your bones were fused with adamantium, if you’d already outlived a normal lifespan, and if your mutant healing factor had weakened lately, you’d be tired, too. Melancholy, even. Such is the state of the Wolverine (Hugh Jackman) as we meet him in the latest Marvel movie offering, Logan. Wolverine’s place in the comic-book universe had already been tapped for X-Men spinoffs, and frankly nothing could have sounded less enthralling then another turn with this particular hairy-handed gent. So, anyway: Logan turns out to be not only the best Marvel film since Guardians of the Galaxy, but a gratifying piece of movie storytelling in its own right.

I throw the word “storytelling” in there because so many comic-book films have followed a ramshackle outline of destruction and wisecracks, all squeezed through the straightjacket of fulfilling some larger canvas—pity the poor screenwriter who must make certain an Ant-Man quip doesn’t contradict a past Avengers film or a future Spider-Man installment. Logan is actual storytelling.

Warner Home Video releases a quartet of DVD debuts, all with troubled critical histories: loved by some, disliked by many, largely ignored by most. And that’s what makes their arrivals so interesting: it gives us a chance, an excuse even, to revisit the films. That said, I’m up to my eyeballs in the Seattle International Film Festival and thus only had time to see one of them, but it was a revelation.

David Cronenberg’s M Butterfly was largely misunderstood or, worse yet, dismissed by most critics when it was released in 1993. The coolly dispassionate screen adaptation of the David Henry Hwang’s Broadway play, itself based on a true story, is in the same key as Cronenberg’s Crash and A History of Violence, and explores the same issues of identity, sexuality and self-definition that he’s been exploring all his career. But in 1993, coming in the wake of The Crying Game and Farewell My Concubine, this elegantly directed period film struck critics as wrong-footed. Jeremy Irons’ RenÃ© Gallimard, a French diplomat in 1964 Peking, falls in love with Chinese Opera star Song Liling (John Lone), who becomes his fantasy of the submissive Asian woman, as much RenÃ©’s creation as Song’s. Because, of course, Song is a man. It’s not only obvious to us but to everyone around RenÃ© that Song is a man (if not as it plays out, then in retrospect – the odd looks RenÃ© gets as he comes backstage at the Chinese Opera to see Song and the disgust on the face of Song’s servant as RenÃ© visits Song’s home are not for Song but for RenÃ©). His mistake is not a misreading of the culture â€“ that would require some knowledge of it â€“ but a complete ignorance of it.Â  Anyone who knows anything about Chinese Opera understands that the female parts areÂ  all played by men, as least before the Cultural Revolution put an end to all such decadent and chauvinistic practices. There’s plenty of evidence that RenÃ© sees only what he wishes to in the Chinese culture, from the trap that he and his wife fall in to accepting all the western assumptions of Chinese clichÃ©s to his disastrous predictions of the Chinese response to American policy in Vietnam. Just like the opera that gives the film its name (and the name that RenÃ© gives Song: Butterfly), it’s a western fantasy of idealized, self-sacrificing Asian submitting to the power of the west with demure grace and romanticized tragedy. In other words (Song’s words specifically), another example of imperialist arrogance in a foreign land.