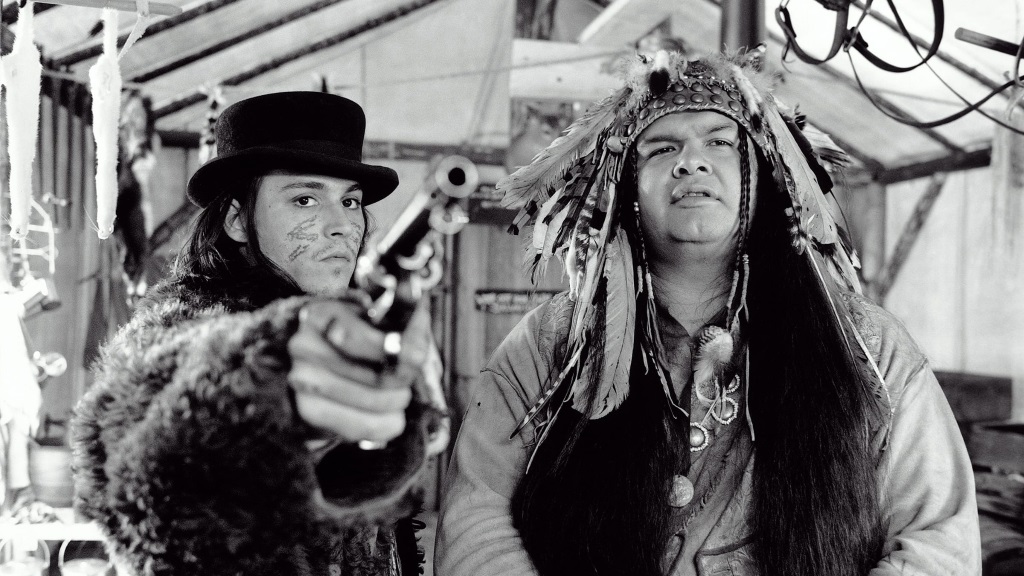 New at Criterion, two highly individualized takes on genre that twist the formulas to very much their own thing. Amy Taubin sings the praises of Jarmusch’s “visionary” western Dead Man (“There are several ways to read the narrative that evolves from this setup. [….] It’s irrelevant which interpretation you prefer. Each has its own logic. What all of them point to is mortality as the preeminent existential condition of our lives. Nobody is baffled that Blake doesn’t know of his namesake, the English poet, or his work, which encourages us to acknowledge our death so that we can live fully in the present moment. Nobody encourages this in his William Blake, just as Dead Man does in the viewer.”); and Philip Kemp argues for Moonrise as Borzage’s last great testament, an infusion of his mystical optimism into the seemingly incompatible host of noir (“When a director’s basic instincts and the style in which he or she is working are at daggers drawn, the results can be disastrous—or paradoxically fruitful. Few films display this creative tension more effectively than Moonrise, the last—and some would say the best—major film directed by Borzage.”).

“But that, I think, is why I love it—why I keep returning to it. The anger, egotism, and paranoia lend themselves to a movie as rich and various as the country it’s about. The movie combines prison melodrama, domestic soap opera, ESPN-esque hype reels, and the monied aspirationalism of 90s hip-hop videos to bear on a plot that twines the moral redemption of a black American felon—and the reconciliation of a father and son—with a loaded racial critique of the commerce of basketball. It’s a sprawling but enduring snapshot of its era.” K. Austin Collins is aware how over-the-top and stacked-deck Spike Lee’s He Got Game is, but on the film’s 20th anniversary flips those flaws to strengths, a way to tear into the commerce of basketball that more “realistic” portrayals wouldn’t have managed.

END_OF_DOCUMENT_TOKEN_TO_BE_REPLACED

[This essay was originally published in an issue of Steadycam magazine devoted to the cinema of Frank Borzage.]

Quentin Tarantino once warned a movie palace full of his fans not to “sophisticate yourselves out of feeling.” It’s a good credo to bear in mind while watching movies by Frank Borzage. When I recently plunged into 16 of this American Romantic’s redemptive melodramas–scarcely one-fifth of his total career output–I wondered if I’d land in comfy cushions of outdated sentimentality, pillowed by the kind of emotional certitude we postmoderns have long since seen through. Instead, the cumulative effect of these cinematic trips was comparable to getting high on revelatory “speed.”

What’s seen and experienced in Borzage’s numinous universe is often so ratcheted up in intensity, so pregnant with his stylized ideas of sin or salvation and stations in between, that your nerve-endings may start to sizzle.

There’s no standing outside Borzagean passion plays like Street Angel (1928), Strange Cargo (1940) and Moonrise (1948); if you cannot give yourself up to the prevailing metaphysics, then you will be blind to the overarching power and beauty of these cinematic autos-da-fe, in which space and time and death are no match for souls on fire with love.

In From Reverence to Rape, Molly Haskell’s on the right track when she characterizes Janet Gaynor as a “peasant madonna,” a big-eyed waif turned goddess by Borzage’s sanctifying gaze. But applying traditional religious terminology to Borzage’s cinema too often encourages critical freeze-frames, snapshots of the start-and finish-lines of a complex journey, as opposed to motion pictures of an Everywoman in resplendent transition.

And Borzage can’t be pinned down to any madonna/whore iconography based on light-and dark-haired women: Gaynor and Crawford, Arthur and Russell incandesce equally in his beatifying mise-en-scÃ¨ne.

It’s true that Borzagean goddesses are so wonderfully down-to-earth, they might all be named after The Mortal Storm‘s Freya (Margaret Sullavan). Mostly capable, often courageously independent, they are replete with common sense even as they are carriers of transforming magic. It’s mostly a given that, in the world according to Borzage, lovers enjoy each other sexually. Unless blocked or twisted, the carnal isn’t dramatically foregrounded, but flows naturally from ecstatic spiritual attachment.

Borzage’s no Victorian when it comes to mad love, unwholesome libido. In The River (1928), Mary Duncan’s Rosalie lounges on a riverbank, flanked by a funereal raven Marsden, her brute lover, left behind on his way to prison for murder. Sullen, affectless, she projects an aura of spiritual–even physical–decomposition. At her very feet, naked, open-faced Allen John (Charles Farrell) rises up out of a whirlpool he likes to ride. At first sight of louche siren and her familiar, this natural man lowers himself in the water so that only his eyes are visible. From the start, she mocks his manhood, his ability to keep her as “warm” as Marsden did.