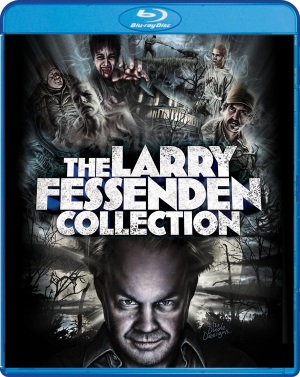 Larry Fessenden isn’t the most well-known of indie-horror filmmakers but he should be. As a writer / director, he’s taken the classic horror genres and turned them inside out, and he’s produced or co-produced dozens of films, including Kelly Reichert’s Wendy and Lucy and Night Moves, Ti West’s The House of the Devil and The Innkeepers, and Jim Mickle’s Stake Land, through Glass Eye Pix, his own production shingle. He’s been a cheerleader, in his own words, for other independent filmmakers with a passion for horror, and his encouragement has made the genre much richer in the past couple of decades.

Scream Factory, the horror imprint of the Shout! Factory label, collects Fessenden’s first four directorial features and releases them on Blu-ray for the first time in The Larry Fessenden Collection (Scream Factory, Blu-ray). All four films are all newly mastered in HD transfers approved by the director and presented in separate discs with new and archival supplements.

No Telling (1991), Fessenden’s first feature as a director, takes on Frankenstein through the story of a research scientist who starts poaching animals from the nearby forest to experiment on while ostensibly on a summer vacation with his wife. Meanwhile a proponent of organic farming tries to get the local farmers to give up pesticides for the good of the land. It’s eco-horror in the modern age. The disc includes new commentary by Fessenden, a featurette, the short film White Trash (1997), and deleted scenes.

END_OF_DOCUMENT_TOKEN_TO_BE_REPLACED

There’s no shortage of independent horror filmmakers but Larry Fessenden is the filmmaker who puts the emphasis on the “indie” part of the equation. As a writer/director, he’s take the classic horror genres and turned them inside out. No Telling was his take on Frankenstein as an environmental drama, Habit, a vampire story set in the drug addict culture of New York City, Wendigo, a monster movie of myth and imagination and The Last Winter, an eco-twist on the ghost story in the culture of big oil. Plus, in addition to his own directorial efforts, Fessenden has produced or co-produced dozens of films, including Kelly Reichardt’s Wendy and Lucy and Night Moves, Ti West’s The House of the Devil and The Innkeepers, and Jim Mickle’s Stake Land, through Glass Eye Pix, his own production shingle.

Beneath, Fessenden’s latest, is a fish story: six teens stranded in a rowboat in the middle of the lake without a paddle while a giant man-eating catfish prowls the water waiting to eat his way through the buffet. What begins as a classic horror film, complete with teenagers who do all the dumb, reckless, aggressive things seemingly designed just to get them stuck in the water, transforms into an insidious character piece that strips away all pretense of humanity and lays bare the envy, resentment, spite and animosity they’ve been burying all this time under snarky remarks and dirty looks. Though it was made as a horror film for a cable channel, it plays more like an American indie drama: Mamet in a boat with a teenage cast and a seriously savage portrait of survivalism at all costs. On the occasion of the release of Beneath on Blu-ray and DVD a few months back, I spoke with Fessenden about the film, his career as a director and a producer, his support of independent filmmaking of all genres and why he’s still so committed to making his brand of horror cinema.

Keyframe: Beneath is the first feature you’ve directed that is not from your own script. Why this project and why the cable channel Chiller?

Larry Fessenden: As you know, I am also a producer and I went there to pitch some of my directors and just to get in with the channel. It seemed liked a fun proposition to produce a film through Chiller. They had money and they were ready to make some original features, and I went through some of the projects that I thought were interesting that we had lined up and they said, ‘Well, those sound good but we also have this,’ and they pulled out this script and I read it and I said, ‘Well I want to do this one, because I love the fish genre, I love how contained the story is, and if you guys are willing, I’d like to try my hand at it.’ I’ve never been a snob about how the work is done. I did another TV show written by some dudes. That was called Skin and Bones [for the series Fear Itself] and it’s one of my better pieces. It’s always exciting to take something and adapt it and put your spin on it and see how you come out. Like doing a cover song.

Beneath was one of the best horror film of 2013. But most people never heard about it.

Produced by Chiller, a horror-themed sibling to the SyFy cable network still struggling for name recognition and access to cable systems, Beneath is the first feature in almost a decade directed by Larry Fessenden. It played a few film festivals and received a limited (very limited) release in July before hitting cable on a channel that few viewers know exists. Which means that hardly anyone has had an opportunity to see the film. With the movie coming out on DVD and Blu-ray this week, that should change.

The limited coverage it has received so far, at least on the horror-centric sites, seems to have missed the point, or at least became so complacent in their own superiority to the conventions of the genre that they never noticed how cleverly Fessenden, who has been turning classic horror genres inside out for over twenty years, and the screenwriters transformed the conventions of this genre—notably the idiotic behavior of potential teenage victims—into defining elements of story and character.

Beneath is both a tribute to monster-in-the-woods and the creature-under-the-water horror (the opening dream sequence turns the “Jaws” prologue into a teenage wet dream) and a genuine indie drama in the guise of a horror film. It springs from Fessenden’s love of reimagining classic genres in modern terms and real-world situations, and for using the conventions to tell character stories. And it was accomplished on a commercial cable movie budget.

Larry Fessenden loves horror movies. As a director he has brought his own unique approach to the classic horror stories and conventions in such films as Habit, Wendigo, and his animist ghost story / environmental thriller The Last Winter. Through his production company Glass Eye Pix his has produced or co-produced dozens of films, including Kelly Reichert’s Wendy and Lucy and Night Moves, Ti West’s The House of the Devil and The Innkeepers, Jim Mickle’s Stake Land, and the recent documentary Birth of the Living Dead, a tribute to one of the holy grails of modern horror.

Apart from an episode of the horror TV series Fear Itself, Fessenden hasn’t directed a film since the 2004 The Last Winter, an eco-twist on the ghost story in the culture of big oil, so the arrival of Beneath, about a group of teenagers, a rowboat in the middle of a lake, and a giant, hungry, man-eating catfish looking for its next meal, is reason to celebrate. It begins as a classic tale of teens behaving badly, and more importantly stupidly, but what first appears to be a lazy set-up to stake out its victims for the movie menace turns out to be an insidious insight to the true nature of its characters and the basis for the real conflict of the film. It’s a smart, savage film that plays with the familiar conventions and then twists a knife in them, and it’s all done with a small cast, a confined space, and a script that reveals the worst in humanity.

While it received a brief theatrical release, Beneath was actually financed by and produced for Chiller, the cable horror channel sibling to SyFy. You say you’ve never heard of Chiller? Yeah, that’s the problem. The film just hasn’t been seen by many folks. Now that it is available on digital and VOD platforms and this week arrives on Blu-ray and DVD, I hope more people have an opportunity to discover one of the most surprising and insidiously clever monster movies of the last year. On the occasion of the disc release, I had a chance to speak with Fessenden about his career as a director, his love of old-school special effects, the real horror of Beneath, and of course what he’s been watching. 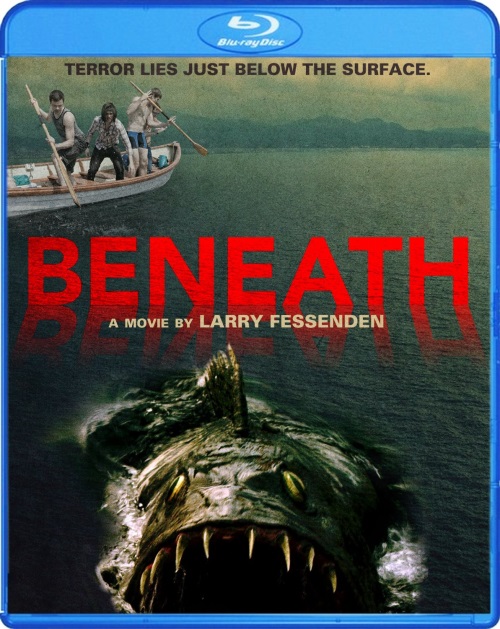 I have a 14-year-old kid who loves movies so we watch a little of the old and a little of the new. We’ve seen all the Oscar stuff and we also watch movies from the seventies and I get him up to speed on Scorsese and Polanski and the heroes of my youth. Oddly enough he doesn’t care for horror so we don’t watch those except for the occasional time. Myself, there’s only so much time in the day so I’m more going on the journey with him. But recent films: Let the Right One In, District 9, The Mist. Those are all a little old but they are recent favorites.

And genre films too. When you are watching for yourself, are you going back to horror films?

Oh yeah, I’m pretty entrenched in genre movies. I grew up watching the old Universal films and it’s fun to watch some of these things again—and again and again—because they really are iconic. The imagery is truly… it’s what I grew up on and it’s interesting to watch them now as you’re older and try to understand what struck you, because of course we’ve become more sophisticated so the images don’t have the same impact, but they do have a strange quality. I love, for example, The Creature from the Black Lagoon, such a strange, beautiful creature design there. I like all kinds of movies.

What inspired you to take on the classic horror movie themes in a series of movies that turns the stories inside-out?

It’s exactly just what I was describing. I grew up on the old Universal films with Frankenstein played by Karloff or Dracula played by Lugosi and obviously then came the Hammer films and whatever, these were the movies you saw on TV when you were a kid in the seventies. But then I also became incredibly turned on by the cinema of Scorsese, these more realistic portraits of people’s psychology and the violence became more visceral and I wanted, in my own mind, to revisit the movies that I loved so much, like Dracula, and put this modern seventies spin on it.