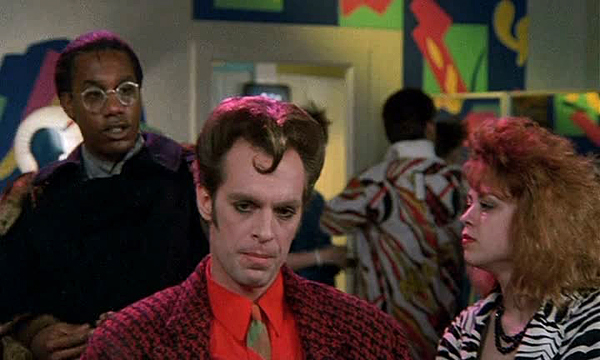 “When I wrote the script it was never as exotic. It was more a straightforward kind of movie. Which it still is. It just takes longer to get straight.”

That’s Alan Rudolph talking about his movie Trouble in Mind, which he wrote “with Seattle in mind” and shot here a year ago this month. How well you take to its exoticism and how patiently you wait for the straightforwardness to assert itself will depend on your tolerance of, or enthusiasm for, Rudolph’s highly stylized brand of filmmaking. I happen to consider him one of the most dynamic, and certainly most distinctive, of modern American filmmakers, and find that his latest feature combines the haunt and vibrancy of Choose Me with the fleetness and wit of Songwriter. That opinion may be disputed. What no one will dispute is that Trouble in Mind makes more exciting use of Seattle as a movie location than any other film ever shot here.

Not that the setting is supposed to be Seattle. Rudolph calls his mythical location RainCity and, as one of the characters reads early in the film, “Above all, the city is a promise of something better—the faint perfume of tomorrow’s fortunes.” That phrase is less likely to have been written by a chamber-of-commerce flack than by a film critic with a deeply ingrained sense of what The City has meant in countless motion pictures about the loss of American innocence. RainCity is the city of film noir, a maze of rain-slicked streets all perversely aspiring to be alleys, of cafés and nightspots and timeless temporary rooms where furtive life hedges its bets and keeps an eye out for the main chance.

Rudolph himself notes that Trouble in Mind‘s characters have been created “out of the movie myth more than the life myth.” The film gets under way with the hero’s release from prison. Hawk (Kris Kristofferson), a former police detective, has spent eight years inside for a vigilante killing. Back in the city, he holes up in a room over Wanda’s Café—Wanda (Geneviève Bujold) is a pal from the old days—and ponders his options. Become a sort of shadow agent for the police? Or sign on with Hilly Blue (Divine), chief mover and shaker of the RainCity underworld these days?

Then fate deals a wild card. Out of the piney woods come Coop (Keith Carradine), a brash young drifter, and Georgia (Lori Singer), the common-law wife he parks in a camper outside Wanda’s while he embarks on a new career in urban crime. Hawk takes one look at the blond waif with baby son in her arms, and our Bogartian hero’s a goner.

The elements of the story are familiar, but Rudolph weaves his own inimitable spell with them. The characters’ trajectories keep crossing, and glancing off one another, according to a cockeyed choreography that speaks to an appreciation of mood, place, and emotional imperatives over the mechanics of plotmaking. Film noir, with its penchant for the ritualized intercourse of strangers and its air of stories that pass in the night, is after all a natural stomping ground for the writer-director of Choose Me, that mating dance of love-seekers beguiled into aesthetic and emotional synchronicity.

Choose Me made sad, unexpectedly sweet comedy out of the elements of despair; in its more sardonic way, Trouble in Mind is also a comedy. Its passages of real or potential violence tend to leap into hysterical slapstick. Thieves and fences pull guns over a Chinese dinner; the convergence of emotional itineraries in Wanda’s Café leads to a flailing punchup and giddy verbal crossfire. On a more sober level, irony and goofiness keep swapping valences: Hawk’s fixation on the bucolic airhead Georgia at once signals that he has begun to “get some heart,” as Wanda once ruefully advised him, and proves his undoing at several levels of absurdity.

In some ways, Trouble in Mind represents a slight falling-off for Rudolph. Although the possibility of death runs riot in this movie, there never seems to be quite as much at stake as there was in the much less sanguinary Choose Me. Some of the comedy is just exasperatingly silly (especially when John Considine, an old comrade from Rudolph’s apprenticeship with Robert Altman, turns up as a gangster rival of Hilly Blue’s), and Lori Singer’s wood sprite, for all her efforts to suggest a kind of animal innocence and purity, mostly comes off as a poor-man’s Daryl Hannah.

But such weaknesses are far outweighed by the film’s myriad beauties. The fiercely ambivalent relationship of Wanda and Hawk is grounded on shared history the more evocative for our never quite knowing what that history was. Joe Morton, who played the silent black extraterrestrial in John Sayles’s The Brother from Another Planet, limns a fascinating portrait of Solo, Coop’s lethal, aphoristic tutor in crime, who speaks in quasi-Oriental arboreal metaphors and sets a death trap with sharpened bamboo. (First approached by the jitterbug Coop in Wanda’s Café, he says, “Impatient, eh?” and makes two declarative sentences out of it.) Above all, there is Rudolph’s tirelessly inventive camera eye (abetted by cinematographer Toyomichi Kurita, making an auspicious debut), which stimulates and rewards the viewer’s own imagination with every adroitly selected angle and mythmaking movement of connection.

The narrative in no way insists on it, but this movie takes place in an environment entirely its own. There’s almost a science-fiction air to this world—”low-tech science fiction, emotional science fiction,” Rudolph is quick to qualify. The action appears to be taking place in the near future. There’s a militia parading in the streets; the bills we glimpse in Hilly Blue’s wallet at one point are multicolored, a visual cross between Canadian currency and Monopoly money; jurisdictions are discussed in terms of “sectors” rather than counties or states. Yet the silhouetted specters of uniformed men in a railway station, the lipstick and mannerisms of a diner waitress, the Forties cut of Hawk’s fresh-out-of-prison suit and black shirt, all lend a flavor of period piece—an acid flashback from the pre-acid past.

RainCity itself, though kissed with the bloody blush of neon, retains, like its real-life prototype, an atavistic memory that it was carved out of mountain and forest. Between criminal endeavors, Solo scribbles and murmurs a prose poem about “a dream of trees,” and after all the guns have gone off and the blood has been spilled, the film leaps exultantly to high country and cloud for a mysteriously beautiful coda.

I congratulated Rudolph on this ending, even as I noted, “I find it terribly moving, yet I really can’t say quite why.” He thanked me and confessed that he didn’t quite know why, either. Being unable to account for the beauty he’d created didn’t seem to bother him much. No reason why it should.