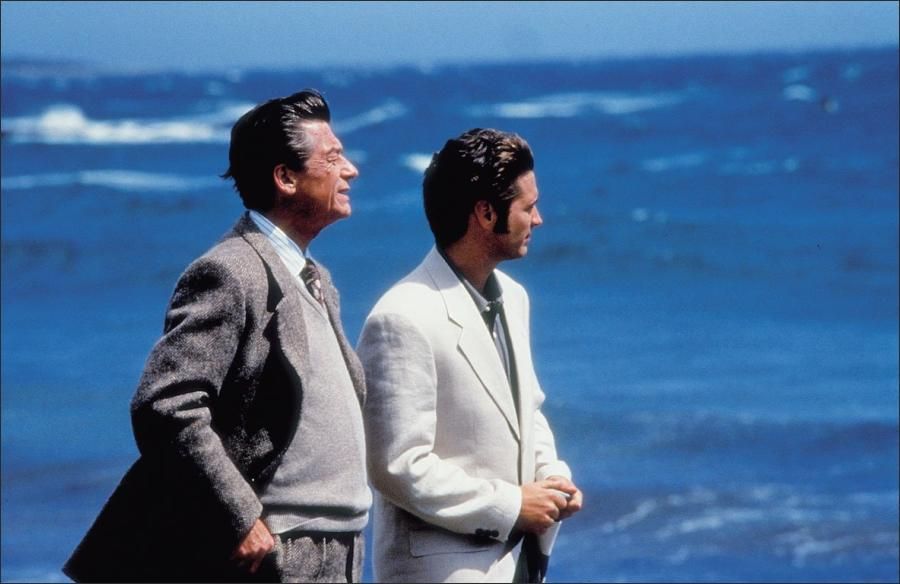 [Originally written for The Herald in 1998]

Its title and subject matter may suggest a heavy arthouse experience. But make no mistake: Love and Death on Long Island is one of the most thoroughly entertaining movies of the year.

This funny, graceful British film features a marvelous central character and one of the best scenes of revelation in years. We spend the first reel of the film meeting Giles De’Ath (he takes some pains to pronounce his name correctly: Day-awth). As played by the splendid John Hurt, De’Ath is a brainy academic writer, a man of large reputation even if nobody actually reads his books. Widowed and isolated in his regimented life, he has quite happily ignored the modern world for his entire adult life. He’s heard the vague rumor that some of E.M. Forster’s novels have been made into films, and one day he tries to see one of these respectable pictures. The confusions of the multiplex result in his buying a ticket for something called Hotpants College 2, an insipid teen sex comedy.

This is the moment of revelation. Instead of stalking out, De’Ath becomes fascinated by one of the actors on screen. It’s American teen idol Ronnie Bostock (Jason Priestley), a perfectly ordinary young heartthrob. Soon De’Ath has checked out Ronnie’s other films on video (after he learns about the existence of the VCR, that is). He buys teen magazines and cuts out Ronnie’s photographs for a scrapbook he titles “Bostockiana.” Eventually this obsession leads the writer to the wilds of Long Island, where Ronnie lives with his girlfriend Audrey (Fiona Loewi). It isn’t long before De’Ath enters their lives, even if the dim-bulb Ronnie is somewhat bewildered by this attention.

For a while, the movie relies on the fish-out-of-water comedy of De’Ath discovering a new and vulgar world. This gets a bit repetitive, as each new unfamiliar piece of the 20th century—a fax machine, a small-town motel—must be figured out anew. Some of the funniest scenes take place in a greasy spoon diner, where the quirky owner (Maury Chaykin) strikes up an acquaintance with the elegant writer. “Best hashbrowns you ever tasted,” he tells De’Ath, serving breakfast. “That rather goes without saying,” replies the writer.

Director Richard Kwietniowski, adapting a novel by Gilbert Adair, keeps the story lightweight, although it darkens a bit toward the end, as De’Ath’s one-sided interest finally finds its expression. The title may be a play on Death in Venice, another study of obsession, but nobody dies in this comedy. Jason Priestley, the 90210 star who really has weathered the tribulations of being a teen idol, does credible work as the clueless Ronnie. But the movie belongs to John Hurt, that velvet-voiced veteran of The Elephant Man and Alien.

Hurt, whose hangdog face has matured into a portrait of English erudition, keeps the role from ever becoming merely comic (as the movie occasionally stoops to an easy gag). In fact, it’s Hurt’s dogged depiction of dignity that plays so wonderfully against the absurdity of his passion. Next year’s Oscars are a long way from now, but I hope this performance is remembered.