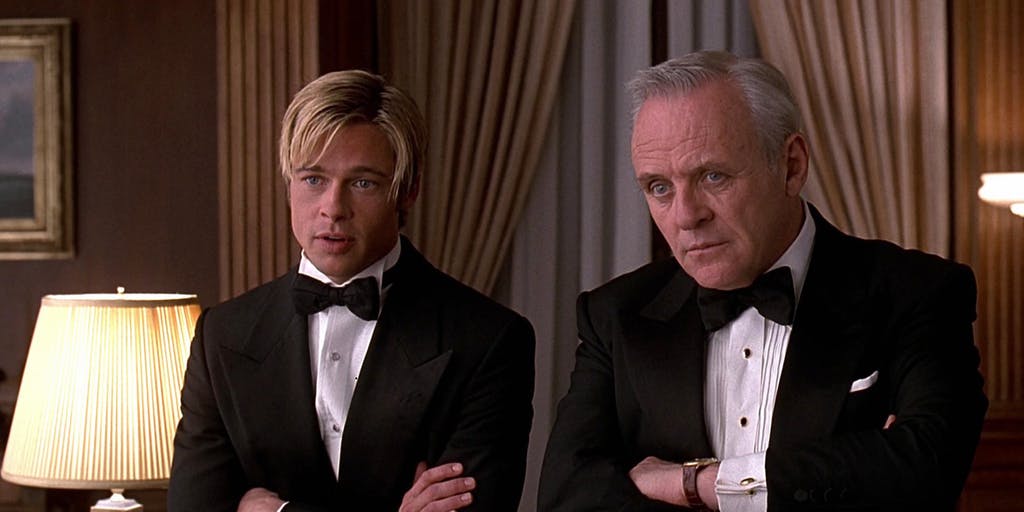 [Originally written for Film.com in 1998]

Martin Brest is one of Hollywood’s choosier directors, a man whose output in the last ten years consists of 1988’s deft comedy Midnight Run and 1992’s slice of inspirational hokum Scent of a Woman. The aroma of the latter film—deep-dish philosophy served up with a generous helping of fried baloney—returns in Brest’s Meet Joe Black, a sideways remake of the oddball fantasy Death Takes a Holiday. That property, filmed in 1934 and (as a TV-movie) in 1971, had the figure of Death coming down to earth to observe how people live. During his vacation, Death claims no victims anywhere in the world, a plot point this new film has jettisoned.

Meet Joe Black has a gratifyingly careful build-up, as we meet a millionaire news magnate, Bill Parrish (Anthony Hopkins), who is about to celebrate his 65th birthday. Bill has all the money in the world, but his nights are interrupted by chest pains and a soft, mysterious voice speaking the word “Yes.” Parrish’s daughter, Susan (Claire Forlani), a doctor in Manhattan, meets a likable young man (Brad Pitt) in a coffeeshop. A bond is struck. Then, after they part, he is hit by a car and killed in the street. This is depicted in a shockingly abrupt and realistic special effect—exactly the kind of thing digital technology was invented to achieve. (Why don’t more people use digital f/x for stuff like this, instead of creating more dinosaurs?) Later that day, Death, the specter that has been whispering “Yes” into Bill’s ear, re-appears at the Parrish mansion. He’s borrowed the body of the dead young man, and he wants to get to know the Parrishes.

Spooky scene: the corners of Parrish’s mahogany-lined library rustle with something unseen, and when Death steps out into the light he seems eerily personable. It’s Brad Pitt’s best scene—you get the feeling he and Hopkins worked through this one a few extra times, to get the shifting gears just right. Elsewhere, the lemon-haired Pitt is not up to the task of suggesting Mr. Death’s gradations of attitude and experience, but Hopkins gives a quietly fascinating performance. He understands that the heart of the movie is in Parrish’s recognition of his imminent death, and how that recognition colors the world.

By the time we reach that scene in the library, Meet Joe Black has made a promising start. Some curious decisions follow. Most puzzlingly, Brest presents Death—renamed Joe Black when he is introduced to Parrish’s family and business associates—as a fumbling innocent, a guy unfamiliar with how to kiss a woman or eat peanut butter. This allows the movie to bring in some fish-out-of-water comedy, with the sound of Wings of Desire flapping in the background. But it doesn’t make much sense, even in the fantasy terms of the premise; Death has been around all these eons, but he hasn’t observed anything?

Death’s progress stretches out to a full, and very slow, three hours — yet not much happens. Susan’s boyfriend (Jake Weber) mounts an office coup against Parrish. Parrish’s other daughter (Marcia Gay Harden) prepares a huge birthday bash; her husband (Jeffrey Tambor) proves himself a mensch. And, in a series of excruciatingly drawn-out scenes, Joe romances Susan. Brest tries for something unusual here — an intimacy that relies on close-ups and silences, not soupy music or snappy editing — but the conversations go on forever, and the film grinds to a halt. Meet Joe Black is a film about the pitiless, relentless figure of Death, but you find yourself wishing he would just get on with his business.