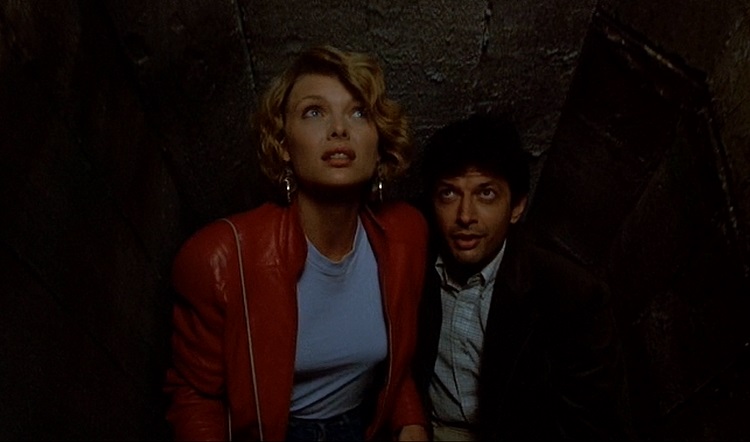 Into the Night (Shout! Factory, Blu-ray)

After the 1970s recast film noir in shades of nostalgia (Chinatown, 1974, The Late Show, 1977) and private eye revisionism and cynicism (The Long Goodbye, 1973, Night Moves, 1975), the eighties gave it a burst of color and energy with Neon Noir. John Landis’s Into the Night (1985) doesn’t have the self-consciously chiaroscuro lighting we associate with noir (Landis uses light for clarity, not atmosphere) but otherwise he takes a classic noir story—the middle-class innocent jolted out of his protected but dull existence and plunged into a nightmarish odyssey into the urban underworld—and treats it right. It was a commercial disappointment in its day and tends to be forgotten in the annals of post-noir crime cinema but if anything it looks better today than it did in eighties.

Jeff Goldblum is our married suburban everyman Ed Okin, an aerospace engineer whose dreams of space have been grounded in cubicle land, sleepwalking through his days and unable to sleep at night. “My life is a dead-end,” he tells his carpool coworker (Dan Aykroyd), “I feel like I’m from another planet,” and things don’t improve when he finds his wife having an affair (but slinks away rather than confront her). This isn’t a man bored by his compromises to conformity, but a man unsure why he is so unfulfilled after doing everything right.