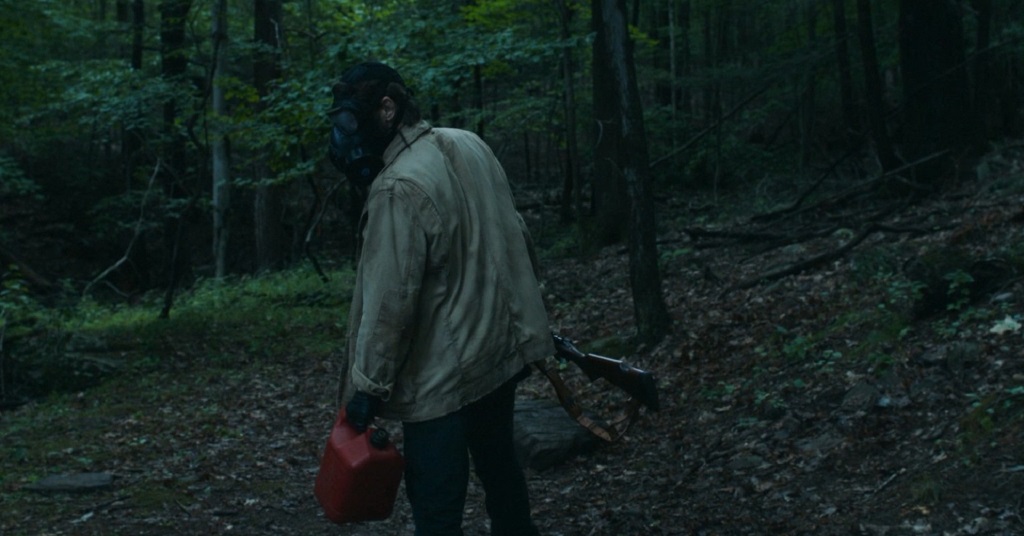 The title of It Comes at Night (2017) sets certain expectations. What exactly comes at night? But the survival thriller from writer/director Trey Edward Shults, set sometime after the ravages of an unnamed and unexplained plague have ripped through the cities and sent survivors into the isolation of the wilderness, isn’t about monsters (human or otherwise) who hunt in the dark. It’s more insidious than that, which is what makes it so unsettling and unnerving.

Our first image is of man, diseased and unable to speak, expiring as figures hidden behind gas masks try to comfort his passing. It’s both tender and alienating, a teary farewell turned mercy killing by terse, protective Paul (Joel Edgerton) and his wife, Sarah (Carmen Ejogo), and their 17-year-old son, Travis (Kelvin Harrison Jr.), and Shults continues directing in that vein. Everything is off-balance, the familiar always on edge. Their country home in the lush green forest has been boarded up and turned into a fortress, the gentle days are under constant threat of pillager and armed invaders, and the nights are plunged in isolation where every sound is a potential attack. So when they catch a man breaking into their home (which, to anyone on the outside, appears abandoned), they have to make a choice whether to believe Will (Christopher Abbott) when he says he’s just trying to find water and shelter for his wife and young son.