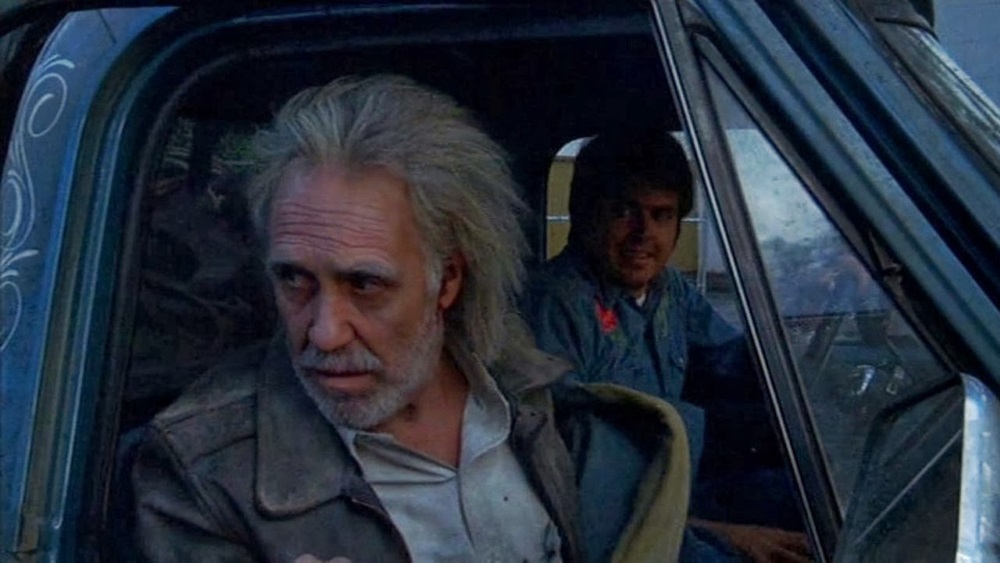 [originally published in The Weekly, November 5, 1980]

Middle of the night in the Nevada desert, a little ways off the Tonapah Highway. Melvin Dummar has left the main road to take a whiz. Decent young fella: even at this remove from civilization, he steps around to the blind side of his truck and looks both ways before undoing his fly. A moment later he’s back in the cab of his pickup, wheeling around to return to the highway, when his headlights sweep something. Sprawled in the dust is an old coot in a flying-jacket, with silver hair like a fright wig grown tired: a streak of dried blood below his left ear seems the natural complement of all the other stains upon his costume and person. He says he’s Howard Hughes.

Melvin and Howard is the title of this movie, and a fit and proper title it is. But the film is scarcely more “about” the putative relationship of the legendary billionaire and the gas-station operator who almost got a share of his estate than, say, All the President’s Men was about Richard Nixon and his helpmates. Less than a reel is taken up with Hughes and Dummar’s nocturnal passage to Las Vegas (where the old man asks to be dropped at the service entrance to the Sands Hotel, and bums his Good Samaritan’s last quarter); and only the last reel or so is devoted to Melvin’s receipt of “the Mormon will,” seven or eight years later, and the celebrity it brings.

Screenwriter Bo Goldman, asked to develop a script around the Hughes-Dummar connection, approached his assignment without enthusiasm until he realized Melvin Dummar himself was the story. Here was a guy who loved his wife and child, yet managed to lose them twice; who ricocheted from job to job, was ever in jeopardy of having his car or truck or motorcycle repossessed, yet just had to send seventy dollars off to an outfit in California that’d supply him with music to go with his godawful song lyric, “Santa’s Souped-Up Sleigh”; who couldn’t win for losing, yet never lost his charm, goodwill, the love of family and friends, or his inveterate disposition to dream.

To play Melvin, the producers found Paul LeMat, the hotrodding John Milner of American Graffiti and—more to the immediate point, if less well-known—the C.B. vigilante in Jonathan Demme’s Citizen Band (released at one point as Handle with Care). As a clear-eyed adaptation of Frank Capra–style populism for our time, that movie had been rivaled only by the plainfolk passages of Close Encounters of the Third Kind, so it made beautiful sense to sign Demme himself to direct.

Among them, Goldman, Demme, and LeMat have pulled off a small miracle: a warm, humane comedy about the quality of life, aspiration, and happiness in Middle America—a marvel of commitment and tact that avoids the pitfalls of sentimentality on the one hand and condescending caricature on the other.

Given what Middle America has turned into, they had their work cut out for them. How to turn one’s gaze on mobile-home living, redneck tavs, breakfast pop-up cuisine, and wedding chapels offering “Hawaiian War Chant” via tapedeck, without either defining your characters as suitable cases for treatment or descending to their level of aesthetic sense and taste?

They manage, beautifully. In one early scene Lynda Dummar (Mary Steenburgen), who has run out on her husband after one repossession too many, prepares to send their verging-on-adolescent daughter home on a bus: Lynda’s boyfriend has just ditched her, she’ll have to take a job dancing in some joint, the child misses her father—this is simply what has to be done. So Lynda buys a loaf of bread, chops it in half with a borrowed knife (the real Melvin Dummar doing a turn as a solicitous counterman), slaps an entire package of lunch meat (unseparated) between bread chunks, and has the daughter bring her the ketchup and mustard squirters while regaling her with advice on how to handle herself enroute. They walk outside to the bus, part without tears. “Thanks for the sandwich, Mom.” The kid means it, too: and we are left somewhere between aghast and terribly moved that there’s nothing else to say.

Jonathan Demme moves this American Dream vehicle along with such vigor and sharpness, it’ll be highway robbery if he doesn’t pull down at least an Academy nomination for his direction. Abetted by Tak Fujimoto’s effortlessly fluid camera and the crisp editing of Craig McKay, he covers a great deal of time and experiential territory in a mere 95 minutes, yet never seems to be putting the rush on things, or packing an event with more activity than it should credibly consist of.

Whether that first, crucial event—”the meeting of one of the richest men in America and one of the poorest,” as Bo Goldman put it—ever took place was finally of scant relevance to Demme & co. But clearly their film believes in it. The meeting of Melvin and Howard, its special sweetness of mood, and the sense of rare and privileged contact between two people that will change everything and yet change nothing at all, hovers over the entire movie. Hughes goes back to whatever shriveled discontent was his at the top of the Sands Hotel; Dummar continues down his klutzy road, and nothing that really matters to him or us in this movie is tied to the fortune that he almost wins for a while.

But a kind of grace has briefly bestowed itself. It is distilled in the remarkable performance of Jason Robards as Howard Hughes: eyes haunted yet somehow still touched with wonder; the tremor of a smile, like an obsolete mechanism reactivated by exposure to disinterested human kindness. Under Melvin’s prodding he remembers a song: “No one here can love or understand me / Oh what hard-luck stories they all hand me / Make my bed and light the light / I’ll be home tomorrow night / Blackbird, bye bye…” He sings that song and, singing it, realizes why it’s the one song he remembers; and that realization fuses with the ride with Melvin, and the scent of greasewood and sage after desert rain. This, finally, is “home” for Melvin and Howard—a moment of rapport in the desperate drift of the American experience. And in that recognition, Melvin and Howard joins the great tradition of American film and literature.