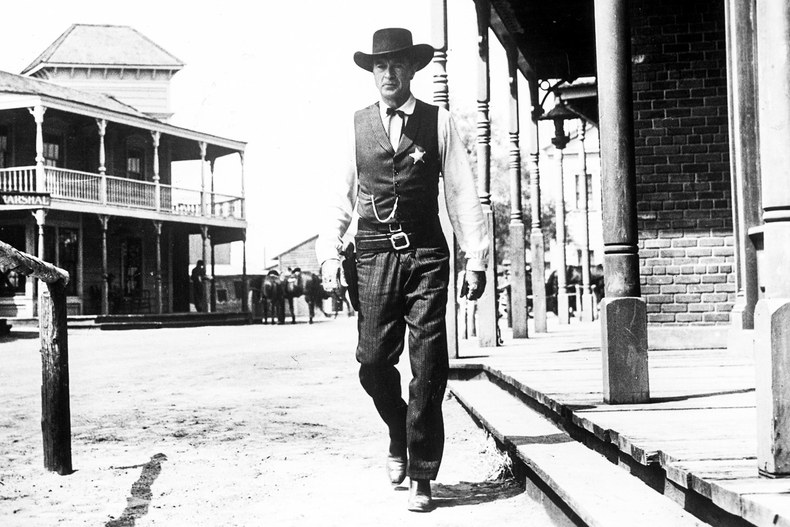 “High Noon had a lot going against it. Foreman had never written a Western. Zinnemann had never directed one. Foreman’s screenplay, inspired by a short story in Collier’s magazine called “The Tin Star,” by John W. Cunningham, had no beautiful vistas, no Indian raids, no cattle stampedes.” And then there were the H.U.A.C. hearings, writer Carl Foreman’s insistence on defying the committee, and producer Stanley Kramer’s more cautious, cover-my-bases approach. Glenn Frankel follows up the story of The Searchers with a look at another classic western of the period, and the politics surrounding it.

“Given this manic productivity, there might be an attendant assumption that more than a few of the films are fuzzy-headed experiments or sly conceptual jests in the style of those early movies from Warhol’s Factory, but all are masterful productions, moving at a stately pace and totally inimitable in their mixture of artifice, raw cruelty, and chill dispassion. He had a system nobody else possessed and taxed it to its limits. ‘There’s this strange compulsion to work which is certainly a strength and a weakness,’ as he admitted in an interview two months before his death, ‘I’d say I’m a manic depressive and I just try to be depressive as seldom as possible.’ His mother adduced a different kind of desperate energy at work: ‘Rainer,’ she said, ‘simply didn’t count on growing old.’” In an excerpt from This Young Monster, his biography of the director, Charlie Fox does a dazzling job connecting Fassbinder’s legendary output and equally prodigious intake—of drugs, acolytes, prostitutes, and scandals—with his innate rebelliousness and his queering of mainstream cinematic tropes. Via Criterion.

“The novel’s Skip and Eddie have clearly modeled themselves after the “tough guys” they’ve seen in the movies. Hitchens doesn’t go into specifics on that point, but Godard certainly does. Early on in the action Arthur mimes the death of Billy the Kid—arching and contorting his body, falling over and writhing in mock agony as if he’d just been shot and killed in a Western. At the climax, when Arthur actually is shot down, he not only repeats those contortions but makes them even more extravagant and melodramatic. For Godard, far more than for Hitchens, real life is indistinguishable from reel life.” David Ehrenstein finds Band of Outsiders enriched not by how much Godard changed from Dolores Hitchen’s source novel, but how much he paid attention to what was already there.

“Scalding liquid thrown on faces, bear trap coup de grâce, bloody bodies piled up in a farmhouse. Through severe, in part, metaphorical terms, Peckinpah’s dysfunctional couple is, by film’s end, stripped of their microaggressions to see things for what they really are—they are not in love anymore and why did they get married in the first place? I can only wonder if Ingmar Bergman saw this picture and admired it. I’m going to believe that he did.” Kim Morgan program notes Straw Dogs, engaging in a film that, whatever its detractors claim, offers no easy answers to its provocations. “’It’s a matter of five centimetres,’ Straub finesses, instructing a non-professional actor to adjust a gesture in Sicilia!—and in that infinitesimal difference one infers a Straubian immensity. In Straub-Huillet’s art, exactitude—of camera angle, speech delivery, compositional framing, bodily placement, gestural manner, shot duration—is all.” James Quandt acknowledges the imposing nature of Straub and Huillet’s films, while pointing out they’re more full of life and humor, and camera movement, then their stern reputation suggests.

“And he’s gone, gone, gone, gone, gone, gone, gone.” Kim Masters reports on the fights between clans Goldwyn and Gershwin that have kept Preminger’s 1959 film of Porgy and Bess from having any public screenings since a 1967 television broadcast, its few known prints hoarded by collectors or locked away in archives. Via Movie City News.

“You might think that, after such a run, Cher would be spoken of in the same breath as that era’s heavyweights—Sissy Spacek, Jessica Lange, Meryl Streep. Time has muddied the waters, though. There is a new generation of moviegoers who know Cher as more of a daft personality, she of the bewitchingly unintelligible Twitter presence, an institution at once revered and simplified. But cultural consecration involves a great deal of forgetting, and it bears remembering why, for a brief but vital period three decades ago, Cher was a movie star.” Mayukh Sen looks back to one of the little-remembered phenomena of ‘80s cinema, when Cher earned the respect not only of audiences and critics, but collaborators such as Altman, Bogdanovich, and Nichols. Via Mubi.

David Bordwell surveys some films from the 1910s and finds the much-derided “theatrical” presentation evolved into a genuinely cinematic style, the proscenium arch metaphor crumbling away as innovative blocking of actors and placement of cameras fulfill all the dramatic cues of the montage method that was—regrettably?—supplanting them.

“If your script passes Bill’s test, he’ll talk to you in person while engaging in his one true passion, guest bartending at random bars he finds himself in. You’ll be Bill’s bar-back, helping to stock the bar with liquor, fixing any keg issues, and keeping the bar’s staff from wrestling control of their establishment away from Bill. Your project will not be discussed and Bill does not split his tips.” Keaton Patti fills McSweeney’s readers in on “The Steps Needed to Cast Bill Murray in Your Film”.

“I never merely make a film because I think it’s going to hit the market. I’m making it because I like the people and the subject involved, and I think it’s going to hit the market, but it’s not made for the market—it’s made for a passion. I join somebody’s passion or they join my passion. And it’s worked: I’ve managed to have a long run, a longer run than many. I’m still running, maybe not on eight cylinders, but on seven. I’m still pushing hard to find original films, original ideas, original filmmakers, and enjoying my journey through cinema that has had some incredible highs and some incredible lows. I still wake up every day thinking about the movies.” Jonathan Murray’s interview with Jeremy Thomas for Cineaste Magazine wound up so long that a 4,400 word excerpt was sliced off and is offered up as a web exclusive, featuring Thomas’s thoughts on his beginnings in the industry, the way it’s changed, and a lengthy look at his one stab at directing, All the Little Animals.

[Fiction] “Michelle had become obsessed with Matt Dillon at a young age, after watching him die in a hail of bullets in Over the Edge, a great 70s movie about disaffected youth shooting guns, having sex in unfinished suburban tract homes and lighting their school on fire. The obsession was stoked when he fucked Kristy McNichol in Little Darlings, and went totally haywire when he embodied all Michelle’s favorite characters in all her favorite S.E. Hinton books….” A record store clerk has a Brush with Greatness, and the narcissism that is Hollywood sexuality, in Michelle Tea’s short story “Matt Dillon”. Via David Hudson.

Bill Paxton is another of the many talents who began working for Roger Corman, in this case working in the art department of films like Big Bad Mama (1974) and Eat My Dust (1976). He went in front of the camera as a soldier in Stripes (1981) and worked his way up from bit parts (such as a punk in James Cameron’s The Terminator, 1984), to supporting roles (memorable as a space marine in Cameron’s Aliens, 1986, and a thuggish vampire in Near Dark, 1987) and leads. He is superb as a drawling sheriff in One False Move (1992) and a treasure-hunting fire fighter in Walter Hill’s Trespass (1992), played Morgan Earp in Tombstone (1993) and Frank James in Frank and Jesse (1995), was astronaut Fred Haise in Apollo 13 (1995) and a tornado chaser in Twister (1996). He remained a favorite of Cameron, with memorable supporting roles in True Lies (1994) and Titanic (1997), and had one of his best roles in A Simple Plan (1998). He’s best known to many audiences as the lead in the HBO series Big Love, earned an Emmy nomination for his role in the mini-series Hatfields and McCoys (2012), and was starring in the new series Training Day when he passed away. He also directed the cult music video “Fish Heads” and the features Frailty (2001), a dark thriller he starred in with Matthew McConaughey, and The Greatest Game Ever Played with Shia LaBeouf. He died at the age of 61 from complications following surgery. Ryan Gibney for The Guardian, and more from David Hudson for Keyframe Daily.